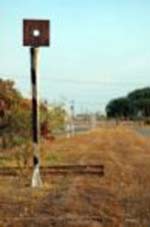 If there is one subject sure to provoke discussion about today’s railway system, especially in New South Wales, it is the timetable and delays.
Folklore steps in with humour.

You know the train system is in chaos when the train you’re on grinds to a halt and you hear the following announcement:

Still, as pointed out by an Inverell resident in a letter to the Editor of the Sydney Morning Herald, ‘Sydney residents have no right to whinge about a mere hour’s delay. The last train that left Inverell left 17 years ago!’

One enduring piece of international folklore, and certainly prevalent in Australian circulation, concerns the belief that Mussolini. the Italian fascist leader, ‘made the trains run on time.’ It is folklore and untrue.

Mussolini needed to convince the people of Italy that fascism was indeed a system that worked to their benefit. Thus was born the myth of fascist efficiency, with the train as its symbol. The word was spread that Mussolini had turned the dilapidated Italian railway system into one that was the envy of all Europe, featuring trains that were both dependable and punctual. In Mussolini’s Italy, all the trains ran on time. Truth is he was a murderer, thug and he did not make the trains run on time!

Early Australian trains ran late for a number of reasons

– floods, bushfires and derailment were among the main reasons.