The History of an Autograph Book

Some twenty years ago a friend gave me an old autograph album he had found in a garage sale in Darlinghurst, Sydney. It originally belonged to a ‘Maggie Someone’ who, for a time, lived in Chatswood, Sydney. The album was commenced on 1st January 1908 and is inscribed ‘To dear Maggie – from her loving sister Florrie’. The last entry was 1916. 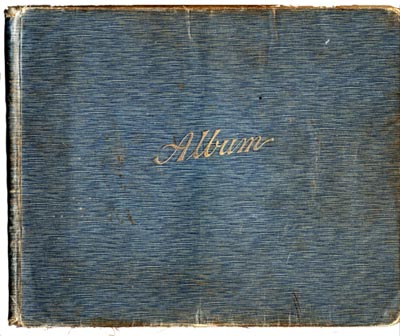 Autograph albums first appeared in any great numbers in Australia in the 1830s and 40s, increasing in popularity in the sentimental seventies and elegant eighties when they were considered to be ‘quite the fashion’. The custom appears to have originated in the mid-sixteenth century in Europe with university students carrying a small leather-bound album amiculum to record the comments and hopefully approving sentiments of their patrons, protectors, companions and comrades. Students travelled widely then and a book of hand-penned references was of practical value as well as a pleasant sentimental pastime. Albums then moved into the parlours of Europe, and particularly Britain, and into history.

An old man writing in Chamber’s Journal (Saturday, August 30, 1873), reminisced: “Those who can look back for half a century will remember the rage there was in their youthful days for albums…. legion was not a name multitudinous enough for them; literary men crouched under their tyranny; young maidens wielded them as rods of iron… Splendid books they were in their day, bound in rich morocco and gold, and often containing contributions from Scott, Moore, Montgomery and Praed; whilst Prout’s beautiful sketches adorned their pages side by side with other artists.”

The anonymous observer names four of the most popular literary figures of the English-speaking world that were much quoted in diaries, newspapers and magazines. They were seen as benchmarks of civilisation and any respectable man or woman was expected to know passages and witticisms. They were also quoted in autograph albums.

With the advancement of book printing and binding in the late nineteenth century, autograph albums became affordable and popular. They were seen as a ‘craze’ and continued their popularity into the mid twentieth century.

Albums came in all shapes and sizes however the standard was approximately 8” x 7” with a decorative cover, usually inscribed as ‘Album’ (remember these are pre photographs), and containing blank pages. Autograph albums were considered to be quite personal however, unlike diaries, they were maintained to be viewed by others. Many owners went to considerable effort to customise their albums, especially in decorating the covers and often the page borders. These sometimes included heavily stitched sewing, hand coloured dyes and paintings.

Albums have a relevance to folklore because they show us sentiments and much of the verse is what we would classify as traditional. Many are drinking toasts that have found themselves on the paper page. They also tell us something of the changing social times and often make reference to major events (like war) or new inventions (like gas or electricity). Every album strove to be different to reflect its owner’s taste, circumstances and personality.

‘Maggie of Chatswood’s’ album certainly tells us about Maggie and her friends. The album is a wonderful work and contains a wide variety of what I will call ‘album lore’. All the following verse and comments pertain to this one album and its eight-year life.

The most obvious element of change in this diary is the almost abandonment of ‘accepted verse’ (usually florid and sentimental) and the encouragement of originality. This was usually achieved with the poetry being doggerel, from verse to worse.

If on this page you chance to look,
Just think of the writer and shut the book.

The opening page advised the reader of the owner’s intent:

Yes, this is my album,
But learn ere you look,
That you are expected to add to my book;
You are welcome to quiz it,
The penalty is, you add your own ‘auto’
For others to quiz.

Many of the verses were used repeatedly and, one assumes, some contributors simply wrote the same lines in every autograph book they were proffered.