The Dunny: a History


THE DUNNY: a history

Australians colloquially refer to a trip to the lavatory as ‘going to the dunny’. They also say ‘going to the John’, ‘the bog’, ‘the outhouse’, ‘the shed up the back’ ‘visit the smallest room in the house’, and ‘the shit house’ (sometimes described simply as ‘shouse’. On their arrival they ‘point Percy at the porcelain’ (Barry Humphries), ‘have a slash’, ‘have a piss’, ‘do number one or two’ (two being rhyming slang for ‘poo’), ‘take a crap’, ‘shake the wife’s best friend’. A visit to the toilet is also referred to as ‘going to the dike’ or ‘the loo’ or ‘going to the can’ – however such use is limited to the toilet block being used as a urinal. Dike was first documented in 1923 ‘Le Slang’

A dunny is essentially a toilet out the back of a house or public building, never inside. In the nineteenth and the first half of the twentieth century, most Australian houses had the lavatory strategically placed at the rear of their house, and usually in the garden. It was usually a pit or can toilet and, understandably smelly, which, obviously, was a good reason to build it separate from the house.

The first Australian print reference was in 1952. T. A. G. Hungerford in ‘The Ridge & the River’: “Right now there might be a Shinto under every bush, and me stuck out like a dunny in a desert.”

The outhouse building gained a reputation as being identifiably Australian – Paul Hogan, the Australian comedian, was once described as being as ‘Australian as a slab off a dunny door.”

Dunnies came in all shapes and sizes and are now considered an important part of our architectural heritage. Songs have been sung about them (The Redback on the Toilet Seat/Slim Newton. ‘The Pub With No Dike’ /Fahey), poems and songs composed, and books have documented their unique designs.

There was a story that dunnies were built specifically so Chokos could grow over them. The choko is a pear-shaped vegetable (originally from South America) that grows easily over fences and outdoor structures. It is either despised or favoured and was an important part of family meals during the Great Depression. It can be stewed, baked and eaten as a sweet or vegetable. Legend has it that we’re still looking for the person to admit planting a choko vine! Chokos seem to especially like dunnies and have been known to cover them inside and out! 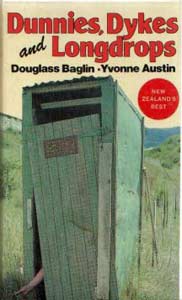 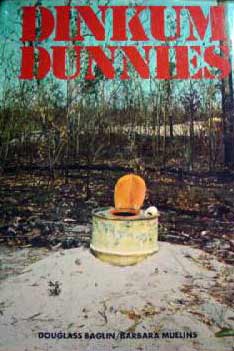 Dunnies also lend themselves to humour and curious design including the double seater ‘honeymoon model’– obviously designed for the upper classes.

Dunnies were seen as frail buildings that could be blown apart (by a fart or high wind) however, when toilets started to be built with brick the term ‘built like a brick shit house’ referred to a particular solid structure.

Toilet paper is referred to as dunny paper however, in the early days, most paper was actually torn up sheets of newspaper. Toilet paper is called ‘bum fodder’ and relates to any publication only worthy as an ‘arse wiper’.

Dunnies were notorious for attracting blowflies that were referred to as Dunny budgies because of their large size and sound.

The man who collected the sanitary cans (or pans) was referred to as the Dunnyman or, sarcastically, the ‘pilgrim of the night’ because of his early morning shift. His vehicle was called a ‘dunny cart’.

Interestingly, a 1907 Paddington Council Annual Report cited that in the year 1906 there were 5000 registered houses in the neighbouring suburb of Woollahra and 4000 of them had cesspits.

The streets of Paddington, and other inner city, high density housing areas, still have what were known as ‘dunny lanes’. These were walkways that allowed the dunnyman to collect the pans. They create quite a problem with ownership as many developers, particularly in the 1960s and 70s, encroached on these public lanes when building.

Dan, Dan, the dunny man
Washed his face in a toilet can
(children’s ditty)

Each Christmas the dunnyman would leave a card – usually with some doggerel verse like the following:

A merry Xmas to you all
With plenty of good cheer
And may you have prosperity
Throughout the coming year.

And though the police keep order
There’s no more useful man
Than the chap who calls at daybreak
And juggles with the can.

We leave your pan quite clean
And try not to make a mess
We leave our verses every year
And wish you all success.
Signed: Your municipal dunny man.

In return we would leave half-a-dozen bottles of beer. No one dared not leave a gift as the consequences could be a frightening thought!

The word dunny is not used much these day however the word has entered our vocabulary and here are a couple of examples:

It stuck out like a dunny in a desert, (very obvious)
All alone like a country dunny. (very lonely)
Carry the can – do the dirty work.

Dunnies also lent themselves to cartoons and practical jokes. Many kids has scared the bejesus out of casual visitors to the dunny by planting ‘double bungers’ (a loud explosive fire cracker now banned) alongside its walls, or, worse still, thrown one into the space.

It’s probably a good thing the loo moved into the interior of the house.

The Dunny: a History
Shock Horror: Folklore of Disaster