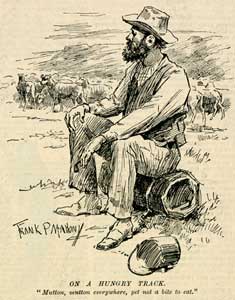 The discovery of gold in the 1850s changed the face of Australia. It also changed its musical face as thousands of gold seekers sailed to New South Wales and then, later Victoria, South Australia and Queensland bringing with them their hopes and wild enthusiasm. Reports of goldfield towns like Gulgong, Ophir, Bendigo and Ballarat, abound with mentions of crazed scenes in the streets and hotels including the boisterous singing of songs and playing of musical instruments. Thousands of Irish travelled to Australia in the face of the worsening conditions at home and this community, noted for their musical appreciation, would have further contributed to the musical landscape. Sailors also contributed and many the salty tar jumped ship in Melbourne and Sydney to seek fortune in the new land and many the sailor’s song has survived the journey. One of the most popular songs concerned a hopeful Irishman who dreamt of ‘picking up lumps of gold off the street’

spread all around the world and the seaports of Sydney and Port Phillip, Melbourne, became chaotic as ship after ship arrived crammed with would-be gold prospectors. Everyone wanted to strike it rich and their passion was continually fired by reports of ‘picking up lumps of gold in the streets’

Warren Fahey sings ‘With My Swag All On My Shoulders’. 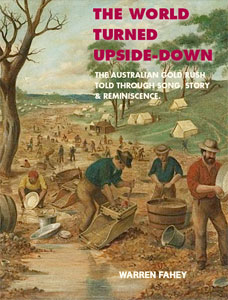 WITH MY SWAG ALL ON MY SHOULDER

When first I left Old England’s shore,
Such yarns as we were told,
As how folks in Australia
Could pick up lumps of gold.
So, when we got to Melbourne town,
We were ready soon to slip
And get even with the captain —
All hands scuttled from the ship.

CHORUS
With my swag all on my shoulder, black billy in my hand,
I travelled the bush of Australia like a true born native man.

We steered our course for Geelong town,
Then north-west to Ballarat,
Where some of us got mighty thin,
And some got sleek and fat.
Some tried their luck at Bendigo,
And some at Fiery Creek;
I made a fortune in a day
And spent it in a week.

For many years I wandered round,
As each new rush broke out,
And always had of gold a pound,
Till alluvial petered out.
‘Twas then we took the bush to cruise,
Glad to get a bite to eat;
The squatters treated us so well
We made a regular beat.

So round the “lighthouse” now I tramp,
Nor leave it out of sight;
I take it on my left shoulder,
And then upon my right,
And then I take it on my back,
And oft upon it lie.
It is the best of tucker tracks,
So I’ll stay here till I die.

Anonymous. From Paterson’s Old Bush Songs, 1924. this goldfields song developed from an older song LIKE A TRUE-BORN IRISHMAN, sometimes known as DENNIS O’REILLY. Russel Ward, in The Penguin Book of Australian Ballads, 1964, explained that ”Lighthouse’ in the last stanza is a joking synonym for ‘swag’, the usually cylindrical bundle carried strapped to their backs when tramping from one locality to another.

The songs of the Australian mining period are not dissimilar to those of the Californian and Canadian gold rushes. They cover the entire gamut of emotion – excitement, disillusionment, anger, and, occasionally, luck. There were songsters published to help circulate the songs.

The most notable local songwriter was Charles Thatcher who was dubbed the ‘Colonial Minstrel’ and some of his songs, including ‘Look Out Below’ are still sung in the folk revival and are occasionally collected as fragments.