“Going to the spree in Lukyn’s barn to-night, Job ?”
‘ Rather,’ drawls Job ; yet with an emphasis that admits of no doubt as to his determination to ‘tread the light fantistic ‘ o’er the flooring boards of Lukyn’s barn.

It is Boxing Day in a small township down South; so small, that though provided   with a school, it has not even a public house ! Ergo, the crowd round the race- course is delightfully sober; private flasks there are, of course, but their owners have divided their contents with true bush bon- homie amongst their neighbors, with the result that none save the most hopeless old soakers are the worse for their libations.

The scene is one to inspire enjoyment in the veriest misanthrope. Imagine a well grassed paddock of moderate extent, fringed on three sides by the feathery wattles   and spiny oaks that mark the course of the river and its tributary creeks. The racing for the day is over. Owners of winning horses strut around, with the bridle that the bay mare won, hung ostentatiously over the right shoulder; or flip at the grass with the   whip of rare and notable design awarded to the local prodigy which came in such a rattling good second in the three-mile handicap.

Everyone is going to the spree. Ezekiel Mullens, the patriarch of all the country round, is an invariable feature of the Barn Dances. Ezekiel, to whom old Andrew Haley is but a stripling ; and who regards young Andrew, the father of Andy number three, as a child of tender age. For, be it known unto   the ignorant, the barn dances are enlivened by song ; and the gem of the even- ing is universally admitted to be a little ballad of some thirty odd verses, relating   to the adventures of one Timothy Tosser,   who sought the affections of a Hebrew ‘ widow, possessed of plethoric money bags, and of the final discomfiture of the swain when the lady eloped with his brother. And doesn’t Ezekiel sing this gem with side – splitting emphasis, and portentous winks, the cuteness of which is beyond description ; and hasn’t he sung this same   song every Boxing-night for nigh on thirty years, so that his hearers know exactly where the jokes come in, and laugh immoderately, never missing a point, while the women gasp : ‘ Lor’, Mr. Mullins, you’ll be the death on us yet !’ But we anticipate. It is barely a quarter to eight when little coteries may be seen, streaming   from all directions towards Lukyn’s barn. Luny is most favorably regarded by the whole countryside. He vends groceries, i.e. tea, sugar, peppermint lollies,   gunpowder, and sardines ; his best parlor is the local post-office; his farm is productive, and well attended to; and, important and. delightful fact! he always has his barn-floor cleared for Boxing Day. The ball-room is already brilliantly illuminated by the festive candle. Candles are all over the place, stuck in niches in the wall, with two or three on the corn-sheller, and a few on the harrow up at the end; the   majority, secured to patent arrangements of wood, nails, and string, which are suspended from the beams which cross from wall to wall. Around the room, corpulent bags of maize, laid sideways, form the most comfortable of seats. N.B.-One bag seats two persons, that is if they do not sit far apart ; as a general thing they don’t.

The ball opens without delay with-‘ a waltz ‘ you say ? No, my friend, with a set of quad rilles of the good old-fashioned sort. No sleepy stroll this, no languid flirtation while setting to partners : their motto is ‘ Galop,’ and galop it is, in every figure of this much neglected terpsichorean exercise, Ladies are decidedly at a premium, as, in addition to the local male population who have turned out to a man-and a boy, there are the jeunesse dorée of the whole of a numerous though scattered population who have brought their horses to the races: and, last but not least, a contingent of miners from the adjacent goldfields. Girls are snapped up at once; next come the young married women who place their sleepy babies in the hay stacked up behind the hurdles at the end of the room, while Ezekiel mounts guard over this impromptu creche and calls the mother of any infant who lifts up his voice in lamentation. Most of them, however, sleep soundly enough through all the racket-all praise to the bush baby ! Portly matrons of extensive build, foot it as energetically as anyone, while little old Mistress Haley, is amongst the briskest of the gay assembly.

As a rule wives dance with their husbands, and though during the evening they may bestow a few round dances on their old beaux, their husbands, in such a case, congregate round the door and smoke, not seeming to care about joining the company of dancers. The music is provided by various members of the company who perform on the tuneful concertina; and the extras are given by a miner who has brought his beloved fiddle along with him. The concertina is par excellence the music of the provinces, as it is of the forecastle. It is not patronised to any   appreciable extent by the lasses, who prefer the piano that Daddy buys them after a ‘ good year ;’ but every gay young spark in the district has his concertina. Not infrequently the performers on these instruments exhibit a rare talent for drawing music from what, to most ears, sounds almost as wild a source as the bagpipes, and many a country dance would be a thing unknown but for the unassuming ‘ screamer.’ In fact too much can hardly be said in praise of this little instrument; it is delightfully portable, and, in a district where all the traveling is done on horseback, that is the chief consideration. Then it is easy to learn, and repays in a short time all the trouble expended on it :   the aspiring musician has not time to tire of his art before he is able to launch forth into the intricacies of ‘Belle Mahone’ and ‘Jack Sheppard.’ Cases are very numerous, where a young farmer, after a trip to Sydney and a visit to the Opera, returns with his brain stocked with every aria in the piece ; and he forthwith produces them one and all on his concertina, adapting them to waltz, march or polka time as the occasion requires. Such a young man is regarded as a public benefactor by the surrounding population. In a wonderfully short space of time the whole country round rings with the more or less mutilated melodies that he has introduced, and it strikes a town visitor curiously to hear the almost untrodden hills echoing the announcement that into Parliament he must go,’ or confessing to ‘ Being as bad as they make ’em.’ 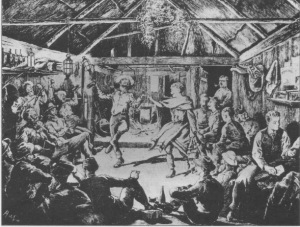 Let us return to the ball. The quadrilles being accomplished to the satis- faction of everybody, the partners separate and go each his and her way. If they strolled off together until the next dance, they would he looked at askance as being heartless flirts and altogether naughty, un- less, indeed, they are engaged, when they are expected to devote the whole of their time to each other. Everyone who can, gets a seat on the corn-hags; those who are not so lucky, stand-really about the wisest thing they could do. A good deal of chaff- ing goes on amongst the young folks; the girls giggle and blush distractingly, and their beaux grin a good deal and stand on one foot with the other twisted round a hoe handle or the leg of the corn-thrasher, or anything else that comes handy. These proceedings are presently enlivened by the ancient announcement about the next dance on the programme being a song, and Ezekiel takes his place in the middle of the room. . He has the remains of a rich, expressive voice, and the words of his song are at any rate more amusing than the majority of latter-day effusions ; moreover, his audience is entirely in touch with the singer, so so that he acquits himself marvelously well, and takes his seat amid terrific applause, resembling the reports of a hundred or so of many-barreled revolvers. After this, the affair is considered to be fairly opened, and polkas, mazurkas, schottisches, waltzes, varsovianas, and galops, follow each other in a breathless, enchanting haste, that has no parallel in the languid pursuit of pleasure of the weary dweller in towns. And these are regarded merely as light relaxations from the grand business of the evening. Highland Schottisches are given a place of honour, but who shall do justice to the intricacies of the Alberts (a square dance), to the curtseying, the little pirouette introduced at all stages, to the grand promenade, the mazy waltz-cotillion, and later to the wild Swedish dance, with its up the middle   and down again, and its perilous tour round the kneeling forms of the dancers, who clap, clap, clap to the time of the music.

Such a rattling pace it is from beginning to end. And when panting dancers with glowing cheeks take their seats on the corn bags, out steps a young dealer in pork, who sings a hunting song, the chorus being given by the whole strength of the company, so that the wallabies on the adjacent mountains are startled from their meal of gum leaves, and flying foxes prick their ears in the orchard half a mile away.

After another dance two ex-sailors foot a hornpipe so deftly that they bring down the house; other intervals are filled by a Highland fling, a reel, a sand shuffle, and various songs, until the shy digger with the fiddle is prevailed upon ‘to favour the company with a song.’ He won’t be beguiled into taking the floor, but keeps bis stand by the open door. There he stands silently for a moment, then dashes straight into a jolly, rollicking little nigger ditty, so spry and lighthearted that the fiddle with which he accompanies himself seems to laugh in a very abandonment of glee. The audience is intoxicated with pleasure, and the singer is compelled to respond to the vociferous encore which he seems scarcely to hear. He draws his bow meditatively across the strings, then glides into ‘ ‘”Way Down Upon the Swanee River.’ As the last word dies away the violin takes up the theme. ‘ Oh, de way am sad and weary,’ it surely speaks, right on to the end of the sad little chorus, till the music ends in a deep-drawn, quivering sigh. Eyes are dim and voices are hushed, till one of the cherubs in the hay, happening to wake, uplifts such a dolorous wail as sets the whole crowd a-laughing.

‘Now, gells, one more hop and we must be off home,’ announces Andrew Hales!

The fiddle bow seems fairly alive as the strains of ‘ Sir Roger de Coverly ‘ ring out on the cold morning air. Faster and faster moves the bow, faster also the dancers as they skim from the top of each long line to meet in the centre, then back to their places while their vis-a-vis take up the thread. The babies wake, and wonder what it’s all about, and sleepy cattle bestir themselves, and reckon that it will soon be time for the boys to come and drive them in for the morning’s milking. One last flourish of the bow, the music ceases, and the barn dance is a thing of the past. The barn dance, with its quaint rules of etiquette, its old world figurings, its flirtations behind the corn bags, its songs, its unaffected good humour, all combining in one delectable whole for the enjoyment of the lads and lasses, old men and eke old women of this southern Arcadia. 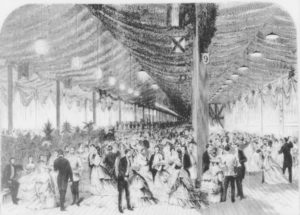