THE CURIOUS HISTORY OF TEA AND COFFEE

The Billy of Tea

You may talk of your whisky or talk of your beer,
I’ve something far better awaiting me here;
It stands on the fire beneath the gum tree,
And you cannot much lick it—a billy of tea.
So fill up your tumbler as high as you can,
You’ll never persuade me it’s not the best plan,
To let all the beer and the spirits go free
And stick to my darling old billy of tea.
(anonymous old bush song) 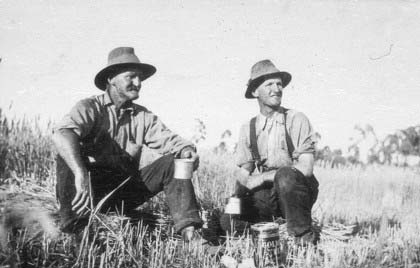 Australians delight in abbreviating many words but ‘cuppa’ must be up the top somewhere, being in circulation for well over a century to describe a cup of tea or coffee. We have always consumed a lot of hot drinks, particularly tea, and this inevitably led to a flow of folklore surrounding the brews, including song, yarn, word usage, custom and that great ongoing debate whether the milk should be added before or after the tea. By the second half of the nineteenth century, we were probably the most voracious tea drinkers in the world. It was not uncommon for bush workers to drink three or four mugs at each meal break, which added up to a staggering 50 or 60 litres a week. This amazing consumption of tea reflected the never-ending thirst of workers in the dry bush and the reality that water was not always immediately drinkable, the tea disguising the often murky and tainted water. It was also readily available, relatively inexpensive, light and, most importantly, washed down hard damper and salt beef. 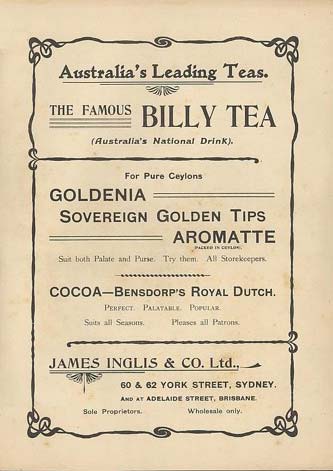 In colonial days the station or camp cook had to rise at around 5 am to ensure plenty of strong, hot tea was ready to get the men off on the right foot. More tea was demanded mid-morning, at lunch, in the mid-afternoon and, of course, when they knocked off at day’s end. They affectionately referred to it as their ‘darling’ or ‘sweetie’. An old bush saying offered, ‘a hot drink is as good as an overcoat’.

A ‘drover’s breakfast’ was said to be ‘often no more than a fart, a mug of tea and a good look around’.

Traditionally the bushman made tea by boiling clean (with any luck) water in a billycan and throwing in a generous handful of tea-leaves when the water came to the boil. The next step was to make the tea leaves sink to the bottom and several methods were employed. Some added a couple of gum leaves, claiming that they made the tea leaves sink, others insisted that the leaves would always sink when the sides of the billycan were given several short, sharp taps with a stick.

Some bushies stirred the tea with a twig while others recommended swinging the billycan around with a circular motion so that the law of gravity would force the leaves to the bottom. As most billy tea drinkers know – whatever you do some of the bitter leaves still end up in your mouth. When tea was really rough it was known as ‘post and rail’ – so called because of the large leaves that remained floating in the mug, resembling the distinctive outback post and rail wooden fencing.

It was around the campfire, sipping tea, that the old bushmen viewed as their common ground; where the boss and his men could discuss the changing world and their respective place in it. Tea was the great mediator.

There were legendary tea drinkers too, like the great cattleman, Charles Kidman, who drank billy tea all his life and, reputedly, refused to ever use a teapot, claiming it spoiled the brew.