Songs of the (not so) Great Depression 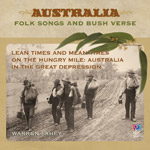 A CD of hard times songs available in our online shop $19.95

‘The Bald Headed End of the Broom’ collected version and Warren Fahey’s version of same.

Lean Times and Mean Times on the Hungry Mile: Australia in the Great Depression.

The 1890’s had been a decade of bitter strikes in the shearing industry followed by widespread rural unemployment. Men, women and even children were forced to uproot and travel the roadways, taking their chances ‘on the wallaby’. Paterson’s ‘Waltzing Matilda’ has romanticised life on the wallaby, roaming across country with never a care, a keen eye on any available sheep for a convenient meal, and nothing but blue sky overhead. The truth was far from romantic. The wallaby brigade was a mixed crew of professional swagmen, hatters, sundowners and those road travellers who simply had no choice but to keep moving, ever hopeful of work. Some pushed wheelbarrows, some rode on bicycles, some on horseback but most travelled on ‘shank’s pony’ walking from town to town. River bends and bridges provided meeting grounds where troubles and mugs of tea could be shared. Some accounts tell of ‘swag villages’ with up to one hundred or more campers. There was a code of ethics and, at one stage, a ‘Swagman’s Union’ with a set of jocular rules like ‘no man was to cadge rations from a fellow swaggie’ and  ‘no man to work under any circumstance’. Such humour was a safety valve for the pent-up anger and frustration many felt at how the land of milk and honey had turned to economic depression.

The Great Depression of the late 1920s and early 1930s hit Australia particularly hard. The land of milk and honey had turned very sour and the anonymous songs and ditties that flowed had a bitter, frustrated flavour. These are songs of survival and possess an almost lackadaisical attitude of ‘how the hell did I get here and why is this happening to me?’

In October 1929 the crash of the Wall Street stockmarket drastically confirmed the arrival of the economic depression that had been creeping up on America and Britain. In Australia the hard times had been blamed on Prime Minister Bruce and his Federal Government with much of the population left shaking their heads. Many soldiers from WW1 were extremely bitter that their comrades had fought and died for Australia and seemingly repaid with the Depression.

One of the few ways to get back at the system was through creating and passing round songs, poems and ditties that made fools of political leaders. There are numerous songs, mostly short verses, satirising leaders like Jack Lang, Edward, Theodore, William ‘Billy’ Hughes, James Scullin and anyone else who dared get in the way.

Australians got through the Depression by sheer determination. They lived on dole rations, soup made from potato skins and the proverbial ‘bread and dripping’ sandwiches. Most believed they were only ‘half-living’ as this parody I recorded from Mrs Susan Colley (to the tune of ‘Pop Goes The Weasel’) implies.

Up and down the Sydney Road,

In and out of the weasel.

That’s the way the money goes,

Half a loaf of bread and cheese,

Half a steak and kidney,

That’s the way the money goes,

The Fahey family were always left of centre – with a family of 16 kids who could blame them. Grandad John Fahey had a particular hatred for William (Billy) Hughes. Mr Hughes and his wife came door-knocking in his electorate and Grandpa picked this ditty up – and so did my father and so did I.

John Fahey was a unionist and, in 1903, worked for a year as a union organiser for the Seamen’s Union. It was around the time Billy Hughes got elected to our first Commonwealth parliament. Later, as WW1 sparked, Hughes became even more unpopular with unionists (and Catholics) because of his continual campaigning for conscription. At one point he travelled by ship to London for a photo opportunity with King George. That’s where this ditty came from – it is set to the then popular tune ‘The Little Grey Home In The West’.

Billy Hughes did have his supporters. He even had a Win The War Party – not that it did him any good as the Conscription Referendum failed twice.

This anonymous anti-Hughes, anti-conscription ditty was a well-known chant at rallies whenever Billy Hughes spoke.

and here’s another having a go at Hughes. Hardly any were in favour!

Set to the tune of the ever popular ‘My Home in Tennessee’, this ditty was sent to me in 1988 by the mining historian Edgar Ross who had learnt it in 1916. Joe Cook, mentioned in the song, was a coal miner and union leader from Lithgow and elected to the New South Wales Legislative Assembly as MP for the coalfields seat of Hartley in 1891. It was Labor’s first big breakthrough in Australian politics and the first time Labor had won a seat in any parliament in Australia. In 1894 Cook was the leader of the group who refused to accept the Labor Party’s decision to make all members sign a “pledge” to be bound by decisions of the Parliamentary Labor Party. He left the party and became a follower of George Reid‘s Free Trade Party. He was a minister in Reid’s government from 1894 to 1899 and, in 1913, Australia’s sixth Prime Minister. Willy Watt refers to William Watt. In the 1914 federal election Watt was elected Liberal member for the seat of Balaclava. He became a leading member of the Nationalist Party when it was formed in 1916 under the leadership of Billy Hughes. Peacock refers to Sir Alexander Peacock, the first Victorian Premier born after the gold rush of the 1850s and the attainment of self-government in Victoria. Sir John Forrest was Federal treasurer. ‘Iceberg’ Irvine was Sir William Irvine, Attorney General in the Cook Government.

Here’s a song in support of Billy Hughes! I learnt this for an exhibition at the Museum of Democracy, Canberra, several year’s back. I just had to record it for posterity!

The Songs of the Street

Where spending our nights in the doss house,

We’re spending our days on the street,

We’re looking for work but we find none,

We wish we had something to eat.

They gave us a big bowl of loop-the-loop,

They gave us a big bowl of soup.

So runs a ditty that gained widespread popularity during the Great Depression when so many Australians found themselves caught up in the seemingly unescapable wheel of unemployment, homelessness and general despair. The soup line was a matter of survival but so was the singing of folk songs that bound battlers together in solidarity. Over the past 40 years I have collected numerous anonymous poems and songs that were created to unconsciously document how we survived the lean and mean times of our history. Our first experience of hard times came when crops failed in the fledgling penal colony of New South Wales coinciding with the late arrival of the supply ships. The goldrush era of the 1850s and 60s also saw despair when eager diggers, many believing they would be able to find gold in the first month of their arrival, found themselves destitute and far from home. Many miners, in order to survive, found work in the developing sheep, timber and cattle industries, but that boom ride also came to an abrupt end with the 1891 shearer’s strike and crippling 1890s rural droughts. These lean times saw many Australians ‘humping their bluey’ travelling the countryside looking for work.

Warren Fahey sings ‘On The Steps Of The Dole-Office Door’

One anonymous ditty summed up the thoughts of many:

Although we’ve plenty of bees and cows, this land’s not milk and honey;

For the b’s are all in Parliament, and the cows have got all the money!

The 1890s also signified a major change in Australian society with the bulk of our population moving from being rural workers to city factory and office jobs. The beginning of the 20th century saw the majority of Australians urbanised for the first time in our history. City life also saw an increase in poverty, slum housing and unemployment as we struggled to come to terms with the dramatic social shift.

One song, a parody of the popular song ‘It’s A Long Way To Tipperary’, dryly observed:

And the soup is thin I know.

But my soup is there.

The songs of hard times in Australia, like their counterparts in America and Britain, tend to be short and to the point. A great many of them use humour and parody proving the old adage: ‘laughter is the best medicine’. In collecting the old songs, and publishing them in books and on recordings, my aim has always been to document the emotional history of average Australians and to show how we create folk songs and humour, especially in times of adversity. There are other emotions hidden in the stories and songs that allow us to see the light through the darkness. I remember tape recording an oral history in Lithgow, in 1973, with a retired miner, Jack Mays, when he told me how he had left his house every day for two years during the Depression, a sandwich in a brown paper bag in hand, and returned every evening at 4 pm. I asked him where he had found work in Lithgow during those lean and mean times. Jack looked at his wife, then looked at me and then whispered: “I didn’t have any work. I used to hide in the bush just out of town. We didn’t want the neighbours to know I was out of work and desperate, they didn’t have any money either.” Now that is real history.