For the most comprehensive history of social dance in Australia, I recommend Dr Heather Clarke’s website https://www.colonialdance.com.au/

Here is a very special page on this site. In 2012 I embarked on a project to record an album with a group of hand-picked musicians who could interpret a particular sound I had in my head and imagination – that would evoke the music of the old bush dances. You can read all about the project, the musicians and the tunes in the accompanying PDF booklet. The CD is still available as a download from iTunes and other internet platforms. If you do purchase it, and you should (there are more tunes than the ones here) make sure you also download the digital booklet.

The most wonderful thing about this project is that I was able to include actuality recordings from my oral history collection housed at the National Library of Australia. These snippets bring the tunes to life. 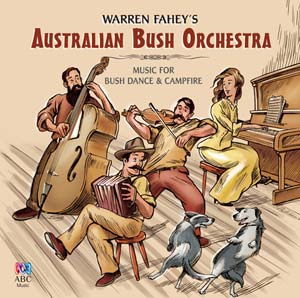 ‘The Catodon Polka’ played by the ABO

Susan Colley, recorded by Warren Fahey, talks about what she wore to dances. Followed by ‘Australian Jim/Mudgee Schottische ‘ played by the ABO.

Susan Colley, recorded by Warren Fahey, plays her concertina and then the ABO play ‘So Early In The Morning/Donkey Riding’

Susan Colley talks about dancing all night. Then the ABO plays ‘The Galopede’

[NOTE: click on the images for a larger view]

In October of 2005 I visited the rural property of Tim Duddy, ‘Rossmar Park’, between Quirindi and Breeza. The Duddy family have farmed this outback New South Wales area since the 1830s. Samuel Clift first settled Breeza Station in 1837. The family has been extremely active in the local community’s social calendar. During the visit I came across a rare handwritten book that resulted in this study of the Murrurundi Hospital Ball. Murrurundi. a railway junction town, was one of the major commercial centres of the 19thcentury.

The book was produced by Mrs C..M..Bell, who acted as Hon. Secretary and Treasurer from 1891 through to 1899. The information in this article has been taken predominantly from the 1897 and 1898 reports as they were extremely detailed.

These balls appear to be typical of country balls staged in Australia however it is rare to find such full reports of ticketing, expenses, attendances and costumes worn.

The minutes also show that the physical territory covered by the event was extremely large – which, of course, meant that the community had to travel rather long distances to attend. Oral histories show that attendees ‘danced all night’ and quite often until the ‘wee early hours’ but always wound their way home in time to attend to their farm duties, especially the milking and feeding of livestock.

One can envisage the excitement these balls must have created, especially with the womenfolk who handmade all the costumes, prepared the edibles, attended to hair and make-up and, between household chores, taught their families how to dance.

The following report of the costumes worn by attendees at the 1899 juvenile ball is hilarious. One can imagine the costumes and the care taken to make them ñ everyone from ‘Dame Durden’ to ‘Hungarian Gypsy’.