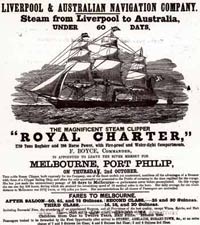 On the 25th October 1859 The Royal Charter, a combined steam and sailing ship from Melbourne bound for Liverpool, was lost off Moelfre, on the island of Anglesey, Wales.

She was built at the River Dee Dockyards and launched in 1857. The Royal Charter was a new type of ship, a 2719-ton steel-hulled steam clipper, built in the same way as a clipper ship but with auxiliary steam engines, which could be used in the absence of wind. The ship was used on the route from Liverpool to Australia, mainly as a passenger ship although there was room for some cargo. There was room for up to 600 passengers, with luxury accommodation in the first class. She was considered a very fast ship, able to make the passage to Australia in less than 60 days.

Almost at the end of its long voyage from Melbourne to England the Royal Charter was carrying four hundred and fifty-two passengers and crew, and gold from the Australian goldfield valued at £320,000. It sailed into the worst storm that had occurred in the Irish Sea during the nineteenth century. Seeking a safe harbour to wait out the terrible storm the ship’s anchor chain broke under the strain and drove the Royal Charter stern first onto the rocks off Moelfre. The ship struck the rocks fifty-yards from the shore and broke into two sections. Every person on board was thrown into the sea except for thirty-two whom perished as they were hurled against the rocks. Many of the passengers were men returning from the Australian goldfields and some had attempted to leave the ship and swim to shore with their pockets filled with gold nuggets. The ship became known as the Golden Wreck because of this legacy.

British collector E.J.Moeran collected a ballad about the wreck from Mr James Strong at Winterton, England, in July 1915. It was published in his Songs Sung in Norfolk, 1923, and, as far as I can ascertain, this was the only time the song had been collected in the oral tradition and, even more surprising, the only time it had been published.

Disaster ballads, and this is no exception, tend towards doggerel. Many of them were published as sheets and sold for a shilling, with the profits going to the distressed families.

This next song was sung to John Meredith by Mary Byrnes of Concord … and she learned it, as a young girl, on the family farm at Springside (near Orange) – probably from the singing of casual farmhands. (Folk Songs of Australia and the men and women who sang them – volume 1

The Mornington Penninsula is on the Victorian South coast and, during the nineteen and early twentieth century, a bust port for steam ships. The waters are quite dangerous and several ships were wrecked. This song, an appeal for financial support for the families, is typical as it recounts the horror and ends with the appeal. Compare it with P F Collin’s ‘Eldorado Mining Disaster’ or The Sunshine Railway Disaster’

This ballad, with its tale of bravado, deceit and sorrow, was a long-time favourite of sailors. This version comes from the singing of Simon McDonald, a wonderful old-time singer and fiddle player who was recorded by Norm O’Connor and H. Pearce at Creswick, Victoria, in 1957. He had learnt the song from his sailor great-grandfather, who had most probably learnt it from American sailors, where the ballad was widely known. I first recorded this song in the early 1970s when I made the EMI album Limejuice and Vinegar, which was reissued in 1985 on the Larrikin label. I still enjoy this high sea chase and the sad lament of the little cabin boy.

Life on the emigrant ship ‘Winefred’.
12 numbers of the ship’s newspaper on the London to Brisbane run in 1875

Entry that Mr Buckingham sang a song including the verse:

Good friends, adieu! I’m shortly sailing
To Queensland over the trackless sea
And when I’m far from home and kindred

I pray you all remember me.

The Wreck of the Dunbar.

Adapted from first-hand accounts and the published narrative verse of Mr Samuel Bennett, Sydney, 1857, by Warren Fahey 2007 – on the 150th anniversary of The Dunbar going aground and sinking off Watson’s Bay, near Sydney Heads. Set to the tune ‘Ginny on the Moor’.

The merchant ship ‘Dunbar’ was shipwrecked around midnight August 20th, 1857, almost under the lighthouse, at South Head, Port Jackson – now known as Watson’s Bay. The Dunbar weighed in at 1980 tonnes had 121 people on board, 59 crew and 62 passengers, mostly long-term residents and ‘respected old Colonists who were on the way back from a visit to the fatherland’. The Captain was also well known in the Colony and much esteemed. There was only one survivor of this terrible shipwreck. 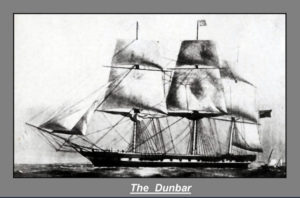 A Narrative on the Melancholy Wreck of the Dunbar

DSM/910.41/D
1857
Booklet with first-hand accounts of the tragedy and a narrative poem prefaced with:

Received them all. One only cast alive,
Fainting and breathless on the fatal rocks –
To weeping friends and strangers afterwards
Thus told his melancholy tale –

As we were sailing to Australia

In 1873 the Orient was about to leave London for Adelaide when the owner of the Lammermuir (John Wills) acme on board with the story that his carpenter had left his toolbox. A five-pound bet was made between he and the captain Mitchell that he couldn’t catch her and give the box over before the Line was crossed. The Lammermuir had sailed ten days earlier however the Orient did catch her up. The crew of the Orient composed this pumping shanty. Taken from The Colonial Clippers Basil Lubbock pub 1948 in Melbourne.

From the sight of dirty gutters, from a town without a drain,
From the shores of Australasia to our own old land again

In the clipper ship ‘Sabraon’ we are bound across the main
To London!

Another remembered song was this version of the shanty

I have not seen this broadside in other collections. It appears to be a fanciful piece with extraordinary evil deeds committed by the Aboriginals who attacked the shipwrecked crew.

The Blackball line ships travelled to most Australian ports. They had a well-earned reputation for speed.

This ballad shares a page with ‘Jack and the Deck Of Cards’on a Broadside published by Nugent’s of Dublin. The ‘John Tayleur’ sank off the Isle of Lembay, Ireland, on her passage from Liverpool to Melbourne.

The following item is an extraordinary lesson in how ballads travel. This appears to be a combination of a British poaching/transportation ballad and a local incident. I clipped this from the Sydney sun Herald in 1964. The recording of Mr Jim Davis is in the National Library Oral History & Folklore Collection.

Refer to the original newspaper article. The ballad is related to early poaching songs and then goes into a local incident – fascinating. I am not sure what the singer is referring to in ‘Valgate Mac’ maybe Newgate Gaol.