In searching through various newspapers as part of my recent Folklore of Sydney project I noticed a series of advertisements in the West Maitland News circa 1870/80s for Paskin’s Music Shop of West Maitland, NSW. This store exclusively sold Cases Concertinas and this led me to searching out information about this British manufacturer. 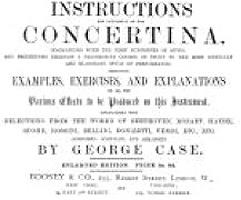 “George Case – 32 New Bond Street. ‘Professor’ George Tinckler Case seems to have been much more of a musician and tutor, although Neil Wayne says that he originally worked for Wheatstone. He produced many tutors and arrangements. From 1851 to around 1856 he had his own company, which George Jones says was taken over from Scates, and later sold to Boosey & Co.. The earliest ‘Case/Boosey’ labelled instrument in the Horniman is No.1571, and the nearest ‘Case’ to that No 960. However Case was buying from Wheatstones in 1851 and 1852,(as was Boosey) so it is possible that some Case labelled instruments may carry Wheatstone serial numbers.”

Another significant influence on the concertina in Australia was ‘Professor’ John Hill Maccann. (aka McCann)

The first successful design for a Duet concertina was patented in 1884 by a young performer, “Professor” John Hill Maccann. Maccann based his design on an earlier Wheatstone & Co. model, but licensed his patent to Wheatstone’s competitor Lachenal & Co., and wrote both a tutor for his new instrument and a more-general “Concertinist’s Guide” to promote it (his patent and both of his publications are available in full on this site). Fine-quality Maccann-system instruments were also made by Wheatstone & Co. after Maccann’s patent expired in 1898, but Wheatstone never used Maccann’s name to describe them. 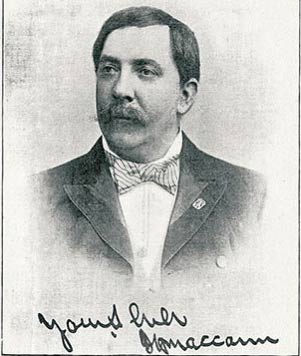 Maccann had great success performing with his new concertina, including a command performance before HRH the Prince of Wales and a North American tour in 1890–1891, and his “Improved Duet Concertina” became the instrument widely used by professional performers in the late-Victorian music halls. Its popularity continued until 1939 but did not survive the interruption in production caused by World War II, and the art of playing the Maccann Duet had become almost lost by mid-century. During its production, a total of a few thousand instruments were manufactured. Today there are perhaps fifty people world-wide who play antique Maccann Duet concertinas.

‘Professor’ Maccann toured Australia in 1922 and, one assumes, brought a quantity of his concertinas for the local market attending his ‘lectures’.

Concertina.net reports:
A new document has been discovered, a booklet authored by John Hill Maccann. It is reliably dated to 1902, and this copy was discovered in Australia where Professor Maccann was making an extended performing tour during that year.

The text of the document consists of two sections:

On the web at www.maccann-duet.com/

Pictures of all pages are available in two sizes, and the entire document can be downloaded in PDF format.

In my work recording Australian traditional players and singers I have met several concertina and melodeon players. Mrs Susan Colley of Bathurst played a beautiful Anglo German style and played dance tunes and song tunes. She was a noted player in the district and took great pleasure in telling me how she would dance around the floor playing the concertina behind her partners back – not too sure how this was done but it must have been interesting to see and hear. (refer Australian Folklore Unit recording/National Library/W Fahey Collection). Lionel Piesch, near Forbes, played English concertina (see Australian Folklore Unit/NLA) and Joe Watson (see AFU/NLA) told me how he played the Anglo German however he had not played it for several years and no longer had an instrument. I also recorded several button accordeon/melodeon players of bush dance music – Dave Matthias of Forbes and Charlie Lollbach of Grafton were two players in the AFU collection.

As I mentioned earlier, none of my informants actually played an instrument to accompany song. Joe Watson told me he had played his Anglo German to accompany the singing of his magic lantern show partner, Paddy Doolin, but never his own singing. This is not to say it was not part of the tradition however I think John Meredith and other collectors had the same experience of players being players and not singing to their instrument. The Salvation Army players I have recorded are an exception. In each case these men, and they were all men, used their concertinas to replicate organ music, and very chordal. They rarely played non secular music.

The melodeon was extremely popular in Australia, definitely much more widespread than the concertina. The most popular were the single and double row melodeons. These fairly basic instruments provided a wonderfully emphatic melody and bass line ideally suited for the dance music for the polka, schottische and lancers. It could also be amazingly gentle for the waltz and slower dances like the Pride of Erin.

In telling the story of the melodeon in Australia, and that takes in other related folk free reed instruments, it would wrong to concentrate solely on the Celtic/Anglo heritage. The German settlers who pioneered South Australia, Victoria and the Clarence River (three main German areas) had a strong influence on our traditional dance music. Musician and dance music collector, Dave de Hugard, has done considerable work in researching this influence. The Italians, French and other European settlers also saw their music and playing styles enter the tradition. In fact the free reed instrument family extends right around the world and is STILL SQUEEZING.

A visit to any folk festival, national or regional will show evidence of all sorts of instruments and all types of players.