By 1890 there was a national web of small railways. If you were able to fly over Australia you would have seen railway navvy tent camps, partly built tracks, piles of sleepers and the Railway Hotels. It became apparent that the emerging federation would need a more organised, national and nationalised railway service. 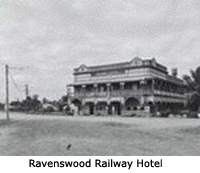 The railway hotel plays an important place in Australia’s architectural heritage and folklore. Often these buildings dominated the main street that inevitably grew up around the train station. Many had distinctive awnings and emblazoned with the name ‘Railway Hotel’. It was at these hotels that travellers over-nighted, railway workers were sometimes lodged, commercial travellers used as a base, and the town gathered socially.

There are numerous songs, poems and yarns based on the railway hotel.

Railway Hotels accommodated, refreshed and fed travellers and locals and became the destination for social life.

The German like his beer
The Englishman his half and half
The Irishman likes his tot and
The Scotsman likes his hot
The Aussie has no national drink
So he drinks the bloody lot!

A man and his wife check into the Railway Hotel. The husband wants to have a drink at the bar but his wife is extremely tired so she decides to go on up to their room to rest. She lies down on the bed… just then, an elevated train passes by very close to the window and shakes the room so hard she’s thrown out of the bed.
Thinking, this must be a freak occurrence, she lies down once more.
Again a train shakes the room so violently she’s thrown to the floor.
Exasperated, she calls the front desk and asks for the manager.
The manager says , “I’ll be right up.”
The manager is sceptical but the wife insists the story is true.
“Look… lie here on the bed — you’ll be thrown right to the floor!”
So he lies down next to the wife.
Just then the husband walks in. “What do you think you’re doing!”, he says.
The manager calmly replies, “Would you believe I’m waiting for a train?” 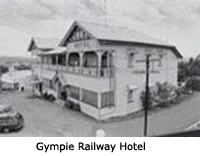 As the railways developed there was a distinct feeling that it was one of the main ways to bring the often-squabbling colonies together. Here was the world’s largest island continent relying on the railway for transport and communication as if it were the life stream of the emerging nation. 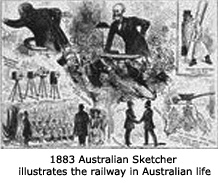 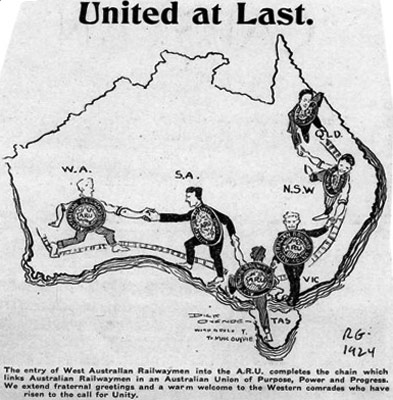 Railway stations are also an important part of our architectural heritage and, thankfully, some magnificent building still remain despite the enthusiasm of our past Governmental and greedy commercial vandals.

One of the little explored aspects of rail history has been the links to our maritime industries. In the nineteenth century many railways linked the ports to the railway. The two following photographs show the tracking alongside the clippers.