Whilst disasters like train crashes are obviously not funny, the folk have a habit of creating yarns and songs to commemorate such events. There is usually an appropriate lapse of time before they appear and, in some ways, these are a folklore mechanism to allow people to actually discuss the events, to confront the situation through music and humour. It is a pressure valve that allows them to continue.

Jim wanted a job as a signalman on the railways.
At the job interview the inspector asked him this question: “What would you do if you saw 2 trains heading for each other on the SAME track? 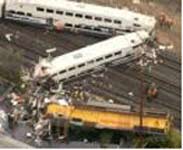 Jim said: “I would put all signals to danger”
“What if they were going too fast?”, asked the inspector.
Jim said,” I would switch the points for one of the trains.”
“What if the lever broke?”, asked the inspector.
“Then I’d dash down the signal box steps waving a red flag”, said Jim.
“What if it blew away in the wind?’ asked the inspector.
“Then…” Jim continued, “I’d run back into signal box & phone the next signal box.”
“What if the phone was engaged?”
“Well…..in that case,” persevered Jim, ” I’d rush down out of the box & use the PUBLIC emergency phone at the level of the crossing.”
“What would you do if THAT was vandalized?”
“Oh well, then I’d run into the village & get my Uncle Harry.”
This puzzled the Inspector, so he asked, “Why would you do that?”
“Because he’s never seen a train crash!!”

‘On Easter Monday, 20 April 1908, the 6.50pm ‘up’ Bendigo crashed into the rear of the 7.15pm ‘up’ Ballarat, which was standing at Sunshine station, seven miles from Melbourne. Both trains, crowed with holiday makers were running late. Forty-four passengers in the Ballarat train were killed and over 400 on both trains were injured. (From ‘Victorian Railways)

Songs referring to rail disasters include The Sunshine Railway Disaster (to the tune of If Those Lips Could Only Speak) and The Springwood Crash.