In November 2009 the multi-national Nestle announced that it was discontinuing the Polly Waffle. All hell broke out across Australia as we witnessed the demise of yet another uniquely Australian product. Contributors to internet forums referred to the loss of another Australian ‘icon’. 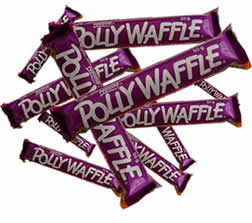 Launched 62 year’s ago by the Hoadley confectionary company of Melbourne, a pioneer sweet company established at the turn of the nineteenth century, the Polly Waffle was a crispy wafer cylinder filled with marshmallow and dipped in chocolate.

Prior to wrapped sweets Australian lollies, and they were primarily what we know as ‘boiled lollies’, were sold out of jars. The first wrapped chocolates, Milk Kisses, were released in 1903 (Melbourne) with the legend: ‘Know them by their printed wrapper’.

The confectionary business is obviously a dog-eat-dog business and Hoadley eventuallygot gobbled up by the British Rowntree Company who, in turn, were gobbled up by Nestle.

The Australian ‘sweet tooth’ was born early and we know from ship’s records that the First Fleet in 1788 carried a load of sugar cane. Settlers attempted to grow it in and around Sydney but the climate was unsuitable. Eventually sugarcane fields were moved further north to follow the sun and, by the end of the nineteenth century Australia’s sugar-refining industries had reached a significant level allowing export trade.

For most part of the nineteenth century sweets meant lollies, which meant boiled lollies. Grocery shops and indeed lolly shops sold various types of boiled lollies out of large glass jars. We have some early photographs of such shops and the variety of boiled lollies is staggering. The favourite appears to be of the ‘gobstopper’ variety – extremely large balls, multi-coloured and possibly multi-flavoured. These later became known as ‘Rainbow Balls’ because of their changing colour as one sucked the layers away. The other two favourite boiled sweets were the Humbug – a black and white striped lolly made of strong-tasting aniseed, and the more traditional European butterscotch and its toffee varieties. Licorice was also popular and there’s even a story of the Frank Gardiner bushranger gang bailing up a hotel and upon finding licorice, distributed it freely to one and all.

The other major sweets in Australia were homemade: biscuits and cakes, stick-jaw toffees, toffee apples, and other such confectionaries.

It appears the word ‘lolly’, an obvious derivative of the English ‘lollipop’, was exclusively used in Australia to represent any type of store-bought sweet. This colloquial use remains today however the dreaded ‘candy’ has made its way into our language because of continued advertising and the insistence of movie theatre chains to referring to their ‘candy bar’ outlets. These candy bars are usually full of generic sweets and a long way from the old sherbet fizzers, musk sticks and bars available in the 1950s.
I refuse to give in to such Amercianisation and still go to the ‘pictures’ (or flicks) and refuse to eat ‘candy’.

The first appearance of the word ‘lolly’ in Australia is most likely its appearance in a children’s book written by a South Australian author who noted: “Fanny ran away to the nearest lolly shop”. The word also appears in a report of the massive children’s party given to celebrate the arrival of Prince Alfred in Melbourne in 1868 – where 15,000 lollybags were distributed.

Bushmen had sweet tooth’s too. In the bush the average worker drank copious mugs of tea, usually black China tea, with several teaspoons of sugar. Their other sweet was the dependable treacle, sometimes later known as Golden Syrup that was applied to any form of damper. Bushmen universally referred to this sweet syrup as either ‘cocky’s joy’ or ‘bullocky’s joy’.

Factory manufacture of the early nineteenth century changed the sweet market and more and more brands entered the lucrative market. Sweet-making targeted various sections of the market on an economic basis. Boiled lollies were still available for the poor (along with broken biscuits which could be purchased at a generous discount), individually packaged sweets for mid-income, and chocolate boxes for the rich. We still see chocolate marketing on a social basis with several local and international brands vying for the same high-end market: Haigs of South Australia, Lindt and Guylian being examples.

American soldiers visiting during WW2 introduced bubblegum to Australia and by the 1950s it had emerged as one of our most popular sweets along with Wrigley’s PK chewing gum. Our favourite bubblegum was ‘Maple Leaf’ which came in a flat package the size of a playing card and, in fact, had a swap card of a famous sportsman or film star. We blew gi-normous bubbles that would often splat across our faces. We were continually warned not to eat the gum, but we did.

Sweets come and go and sometimes even come back. They are prone to fashion trends. In the tragic tale of the Polly Waffle Nestle simply issued a statement saying we weren’t eating enough to warrant manufacture. Other sweets have suffered the same fate: in the early part of the twentieth century we had ‘Braddies’ (named after Don Bradman and carrying the legend: ‘The best bat of Australia’), ‘Euclips (6 for a penny – and made from Eucalyptus oil), ‘1oo’s & 1000’s’ which you bought in a packet ‘Bonzer on bread and butter’, Bears (they carried a message: They won’t eat you – You eat them!) and then there was the Kosciusko Kakes, as white and powdery as snow.

Later, around the nineteen fifties, we saw the Australian company MacRobertson release a long line of sweets until they too were gobbled up by Cadburys. Some of the most famous packaged sweets were the Choo Choo Bar, White Knight, Hopalong Cassidy Bar, Violet Crumble, Cherry Ripe, Wagon Wheels, Mars Bar, Rolos, Kit Kat and MacRobertson’s hugely successful Columbines.  Some of these sweets remain available but one by one they will no doubt disappear.

Fantales, Wrigley’s Gum, Minties, Jaffas and Fruit Tingles probably hold a special place in Australian hearts along with the Polly Waffle. Folklore often played a role in marketing these sweets. I recall one particular myth about Wrigley’s PK that said there was a particular sequence of numbers printed on every packet, no doubt batch numbers, but if you got a straight series you were entitled to a year’s supply of free gum. Jaffa stories were quite different and just as many Jaffas rolled down the aisle as popped into mouths.. Fantales and Minties wrappers were usually rolled up tight and flicked to someone’s unsuspecting head when the lights went down.

During the 1970s the advertising slogan for Polly Waffle was “mmm, crunch, aah!” and a recording of this stimulating and mind-numbing jingle is held in the national Film and Sound Archive on a FACTs (Federation of Australian Commercial Television) sample reel.

There was also a rumour that ‘sometime’ in the seventies, maybe eighties, a Polly Waffle Ice Cream was manufactured however I have no recollection of this product.

Another rather reference to the cylindrical chocolate bar appears as a colloquial euphemism – “who left the polly waffle floating in the toilet?”

And, as a final piece of Australian idiosyncratic history, I would remind readers that in Aussie Rules a player who isn’t definite about his approach to the ball can be accused of ‘pollywaffling’.