The railway has a long and close relationship with popular music – possibly more so than any other industry. This would be attributed to the ‘romance’ of the railways in taking loved ones on long voyages, men off to war, reuniting loved ones etc. So many songs have been written about train travel and in just about every musical genre.

Here’s a very short list of train and rail songs that were popular in Australia:

Robert Paling composed The Railway Waltz in 1855 for the grand opening of the Sydney to Parramatta line. This was one of the earliest dance compositions for railway, even before Strauss composed his Vienna Rail Waltz (1857).

Trains also featured in early feature films and film serials. The villain (hiss) always seemed to want to tie the poor innocent, young, attractive girl to the railway line. How they got there was usually never explained. The serials, especially thrillers like early ‘Spiderman’ also favoured trains and many the suspenseful serial ended its weekly showing at the stage when the train was about to be:

These were exciting times for a youngster who had hardly been on a train. Later trains became the setting for a more romantic approach with films like Dr Zhivago and Some Like It Hot. Then there were the mystery films like Murder on the Orient Express and The Private Life of Sherlock Holmes. Trains in cinema could be attacked by Indians, held up by robbers (especially Mexicans), blown up and, more recently, in Batman Returns, it becomes a runaway.

The 2004 Children’s Christmas film, The Polar Express features Tom Hanks as a genial guard and, in 2005, The Hogwart’s Express steamed into another Harry Potter adventure. Trains still capture our imagination. 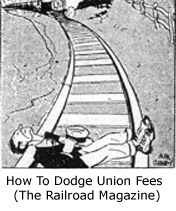 The early days of Australian country music were heavily influenced by railway songs and our leading performers included them in their repertoire. There were two reasons for this popularity and both were related to the influence of so-called Country & Western music and especially as portrayed in 1930/40’s Hollywood films. The image of the smoking, fast approaching train was used in Westerns, city films and, of course, in cartoons.

The image of the young woman (or man) tied to the track by the nasty villain resulted in hissing from the captivated audience. Cinerama also showed rail footage as the cinema audience swayed in their seats.

Then came the craze for Victorian Parlour Room songs – mostly comic Irish songs like ‘Are You Right There, Michael, Are You Right?‘ or Joe Slater’s, 1906 hit, ‘Man in the Signal Box‘ and that hugely popular tear jerker ‘The Luggage Van Ahead‘ as later adapted and popularised by Tex Morton.:

This brings us to Country Music – the railway’s best musical friend.
Much of the early recordings of Australian country music featured train songs. On radio, especially the 1940s and early 50’s, the ‘live studio” singers were introduced with train sound effects.

Here is a list I prepared of pioneer country artists and their first train songs:

The country songs all had a relationship to our folk tradition because of the timeframe and how we used songs as popular entertainment. Tex wasn’t the only one who changed the words of American songs to suit the local lingo and environment.

Dance crazes continued to use train themes – J C Williamson’s ‘1920’s hit ‘Meet Me At The Station Down in Dixieland’ and the 1917 Tivoli Follies hit ‘All Aboard The Ragtime Train’. 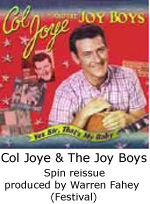 Classical composers also romanticised train travel including Eugene Goosens, Percy Grainger and George Dreyfus. I could mention trains songs in jazz and the folk revival and, of course, the rockabilly, b5lues, western swing and a zillion other musical expressions as we caught the Chattangooga Choo Choo, The Rock Island Line, The Freight Train, The A Train, The Honky Tonk, The Peace Train, the Finicula and even Elvis on the Mystery Train. Our first big instrumental hit was the Joy Boys and Southern Aurora.

It was the ‘folk’ who gave us the real emotional link with rail because of the nature of traditional and anonymous song. They sang about navvies, train drivers competing as in Billy Sheahan, songs about union struggles, soldiers getting trains, swaggies hopping trains, songs about railway refreshment rooms and songs about the people who worked on the trains. These songs are still being written and still being sung.