THE STORY OF WILL H. LISTER – AUSTRALIAN BUSH HUMOURIST 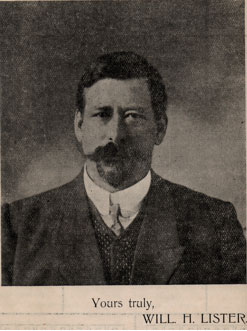 I am an inveterate explorer of second-hand bookshops and book fairs. In 2002, at a Kings Cross antiquarian book fair I found a slightly damaged copy of a book titled Me – Und Schmertzer by ‘Heinrich Scheinloof’. I wouldn’t normally pick up a book in what looked like German, but I recalled having seen the name before. In fact it has been mentioned in an interview I did with a German Australian, Jacob Lollbach, in Grafton, in 1973. I recorded Jacob (who was 102 years old) and his son, Charlie, for my National Library of Australian Folklore Collection.

I took the book home and straight into my library with the other magazines and books I had nabbed. It wasn’t until six years later that I took it down and started to read the poems and uncover the story.

‘Heinrich Scheinloof’ was actually a native-born Queenslander named William Henry Lister. He was born 28 October 1866 and died 1935. He was educated in Roma and Brisbane and went on to lead a varied working life as a journalist. He was editor of Toowoomba’s Biz newspaper and owner of the North Coast Star and the Moreton Mail. He had three books published: Heinrich Scheinloof: His book (Self-published, 1896, Toowoomba), Me – Und Schmertzer (Published Brisbane, W.H. Wendt, 1905) and Thoughts For Tonight (Published Brisbane, Read Press, 1926 and based on his 4QG broadcasts). Lister also contributed verse to The Bulletin, The Queenslander, The Daily Mail, The Observer, The Courier and, of course, The North Coast Star, which he owned. A search for his newspapers in Queensland’s Oxley Library shows the Moreton Mail was established 9 January 1886 but there is no reference for either Biz or the North Coast Star however the fact that one of his books was published in Toowoomba in 1896 suggests he had been editing Biz at that stage.

Me – Und Schmertzer was distributed by Gordon & Gotch and was 21.5 x 14 cm, soft paperback, 126 pages and my copy was inscribed ‘review copy’. It cost one shilling and appears to be under represented in the national collections. Two copies in the Oxley marked as having particular Queensland relevance. The cover carries a note: ‘A liddle nonsense fon mine pen, vos haf some senses now and den’ and the cover illustration of a pipe-smoking ‘Heinrich’ exclaims ‘Dot’s Me!’ The book offers around 85 poems and various short humorous sketches from ‘Heinrich’ plus a series of nature photographs of landmarks such as ‘Crooked Neck’ (Glass House Mountains), ‘Lake Eacham, Mount Morgan mines, Dagg’s Falls, Killarney and the Railway Bridge at Caboolture River. Some have accompanying verse. It should be mentioned that at the time the book was published reciting was popular. Lister even makes mention of this in his introduction:

Garbled English, often referred to as ‘broken English’ is a fascinating study and appears to have been a part of popular Australian entertainment for quite some time, probably originating in English vaudeville and landing here during the 1850s goldrush. It is no coincidence that many German immigrants came to search for gold.

Although they seem to have disappeared the most common forms of Australian broken English were German, Dutch, Yiddish and Aboriginal so called ‘pigeon English’.

Mark Schuster has done considerable work on German traditions in Australia, including several oral history recordings for the National Library, and has been very generous in my own research into Will H. Lister. Mark is himself of German background and explains that gemixt idiom is regional, and referred locally as Barossa Deutsch; Lockyer-Deutsch; Fassifern-Deutsch etc. and that the regional German-English languages were subtly different. ‘Some had a large smattering of ‘low’ (Platt) German words embedded.  One or two variants would be very hard for us to understand.  Most people spoke the Platt – whereas ‘Hoch’ Deutsch was used for schooling/Church.’ Mark reinforced that the majority of German settlers had a good attitude to life, enjoyed drinking, socializing, music and joke telling. One can imagine the pioneer families, with a smattering of English, trying to communicate with the dry-as-a-bone Australians, and the invention of a humorous broken German/English would have produced laughter on either side of the fence. Much of our pioneering spirit could be summed up as ‘what else could one do but laugh’.

The term ‘double Dutch’ will be familiar to many readers. Dutch, like German, is a guttural language and presents certain difficulties in pronouncing words like with which becomes mit, where becomes dere and they becomes dey – and these examples are only the easy ones! The Jews were a popular target for humour and, considering the number of Jewish stage performers in London, Manchester and New York at the end of the 19th century, it is interesting to note that much of the seemingly racist material emanated from their own acts. One of Australia’s most gifted and popular entertainers, Roy ‘Mo’ Rene, was a Dutch London Jew (his real name was Van der Sluice) from Adelaide and much of his humour was based on Yiddish put downs, including songs. Aboriginal ‘pigeon’ was also a point of humour and references also appear in songs like the final verse of The Old Bullock Dray’ and ‘Old Black Alice’. Most of the Aboriginal material was of the ‘Witchetty’s Tribe’ variety in as much as it was condescending and would be thought inappropriate nowadays.

One of the questions arising from these various groups is whether they were seen as racial slurs. The Germans and Dutch broken–English songs, jokes and monologues do seem to place their subjects as dumbkofs or bumpkins. Lister’s ‘Heinrich Schmertzer’ and his German associates are not portrayed as fools but as kind, sometimes bumbling, pioneer settlers facing the usual rural challenges but addressing them in a German Australian comic way. They also express a passionate love of Australia, something most native-born Australians found it difficult to express. Lister’s works also point to a concern over the, at the time, growing disquiet in Europe over Germany’s imperialistic moves. This must have been a difficult position for German Australians and, of course, news from Europe to the backblocks was unreliable, usually out of date, and prone to misinterpretation.

A pioneer of German broken English song was J.Emmet who was an Adelaide-based vaudeville artist. His Emmet Songster, published by Coles Book Arcade (Adelaide Branch) in 1877, included such titles as ‘Schneider, How Vas You?’, ‘Shonnie Vos A Nice Young Man’, ‘De Vatercress Girl’, ‘Sauer Kraut Recipe’ – all sung by his internationally renowned character ‘Fritz’.

Many Germans came to Australia for the goldrushes and German named towns and landmarks cover Australia. I was curious why Will H. Lister would have chosen to work with a German character (if he himself was possibly not of German extraction) and Mark Schuster explains some of the background to German immigration flows:

The other issue facing German Australians was that of the threat of war. Lister’s book has several poems about the changing climate in Europe and a series of verse calling for peace. The harsh reality came when, in both WW1 and WW2, German Australians were sent to camps ‘where they could be watched’. Mark’s father, grandfather and uncles were sent to such camps and he explains that the internment is still a sensitive matter with many families. In WW1 many were sent to Holsworthy and in WW2 to Tatura – where they were retained throughout the entire war. ‘This is such a big thing. It still hurts in my own (loyal Australian) farming family, and many oldies still cry over the situation. The majority of the public has no idea of what really happened.’

I am indebted to Joan Emslie Coxsen, great-grand daughter of Will Lister, for forwarding Will’s marriage certificate and a signed photocard. I found your story of William Henry very interesting. My Great grandfather was Williams younger brother Frederick. You state that maybe William was of German heritage, No his ancestors actually came from Manchester, England. His grandfather George along with his family and his sisters family came to Brisbane, Australia in 1854.  Williams great grandfather Thomas Lister was a Cotton Mill Manager of Manchester. Two of his uncles Alfred and Frederick Lister became Council members of Gympie and Frederick actually became Mayor around 1905.  William lived in later life in Sandgate and it is his verse on the War Memorial in Sandgate,( He didn’t  want to be noted for it by having his name added as it was a memorial for the brave soldiers)  He was also very involved in the Sandgate Council.

Once again thank you for the interesting information on my great uncle William Henry Lister.

The Story of Will H. Lister