Factory, office and workshop life can get pretty tedious and the ‘folk’ create all manner of things to make working life more bearable.

Australians have always liked nicknames – describing people – affectionately or unfortunately – taking their inspiration from puns, in-jokes, sound alikes and other mechanisms. He’s some Eveleigh Railway Workshops nicknames from the past. 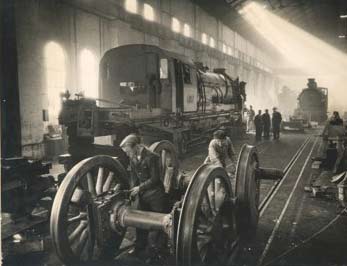 The boss and his deputy were not the brightest men.
They were always referred to as ‘the close finish’
There was only a half head between them!

Two line workers were celebrating one of their birthdays.
Jack said “here’s a toast to long life for you – May you live to be 120 and three months.”
“So what’s the extra three months for?”
“Well, I wouldn’t like to see you die suddenly”

It does not take people long to forget favours. They have forgotten the days when the headlight of the locomotive was a star of hope; when it threw its first beams across the plains and the pioneer knew he was no longer alone.

The locomotive cut down the distance that separated him from his old home and his fellow men. It carried former joys to his door and gave him markets that doubled the value of his crops. It meant more companionship and increased value for his possessions. It delivered books to the children, seed for is fields, papers for long hard bush nights, and people to make a city within reach of his farms.

Now we forget, and to the pavements built with our money that the railways helped us to make, are used to drive our old benefactors to the wall.

HELL- ON THE TRANSCONTINENTAL RAILWAY

A trip through some of the outlying parts of Australia is invariably an eye opener in more ways than one. There is often beautiful scenary which the worker cannot enjoy too much, his mind being more taken up with the sordid details of his wage slave’s existence.

For instance, take the Transcontinental railway. Here and there along the railway line are little settlements mostly composed of railway workers. The huts that these workers live in are of the two-compartment shanty type or one room. At least, you can hardly call them rooms. In the hot summer sun (the temperature is 116 degrees in the shade) the workers and their wives suffer and stew, and the little children cry for a cool drink. Meanwhile, in the trans train, the toff-class enjoy themselves to the limit.

One day, while hawking toilet soap to make a crust, I called at the house of an aged woman. Piled high in the room were bags which were being sewn and repaired by this old working-class woman. Her eyes were bloodshot, and she said she earned but a few shillings per day.
Such is the existence of us toilers. J.D.

A stuttering sailor aboard the Shirley Ann who, just as the ship was getting out to sea, dashed up the bridge to the Captain. He was out of breath, and in a state of great excitement – stuttering and splattering and unable to get a word out.
The Captain, who knew the sailor well, shouted: “Sing it, man! Sing it!”

The sailor looked at him and began:
Should old acquaintance be forgot
And never brought to mind
The blooming cook fell overboard
And he’s half a mile behind.