Malcolm J. Turnbull is a historian, teacher (and sometime folksinger), with particular research interests in the Australian Jewish community, classic English crime-writing – and the 60s folk revival. Recipient of the Isi Leibler Prize at Deakin University for his 1995 Ph.D. thesis (on Judaism in Melbourne), and a nominee for the Mystery Writers of America ‘Edgar’ award for his first book, Elusion Aforethought (1996), he is also author of Victims or Villains (1998), Safe Haven (1999), A Time to Keep (with Werner Graff & Eliot Baskin, 2005) and Onemda ‘With Loving Care’ (2006). Other publications include contributions to the international journals CADS and Clues, the Australian Dictionary of Biography, the Companion to Tasmanian History and the multi-authored monographs A Few from Afar, Carlton: a History and The Australian Jewish Experience.

A veteran of the earlly Tasmanian folk scene Malcolm has also published extensively on the Australian folk revival in the magazines Trad & Now, Australian Tradition, Drumbeat, In-folkus, Town Crier, Folk Rag, Cornstalk Gazette and Australian Music Museum. As a performer, he sings an eclectic mix of traditional and contemporary material with a specific emphasis on neglected songs by Tasmanian writers.

I was lucky enough to encounter folk music during the folk boom of 1963-65 when I first became conscious of the guitar-playing American troubadours of the era. My road to Damascus was seeing a clip of Peter Paul & Mary perform ‘The Times They Are A-Changin’ at the Sydney Stadium. So began a 40+ year love affair. 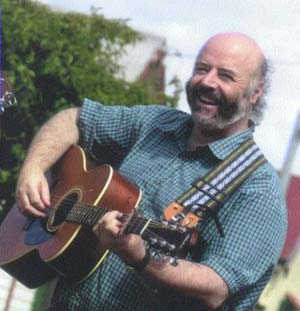 Around the same time, local girl Patsy Biscoe sang folksongs on local (Hobart) TV before making it onto Bandstand; the ABC series Jazz Meets Folk introduced Marian Henderson to a wider Australian public; and shows like The Country & Western Hour, Dave’s Place and Bandstand acquainted many of us with the likes of Tina Lawton, Paul Marks, Brian Mooney, Martyn Wyndham-Read, Sean & Sonja and Lenore Somerset. I bought my first guitar (on lay-by) at Lloyd Campbell’s in Hobart’s Cat & Fiddle Arcade, and made my folksinging debut, rendering ‘Moreton Bay’ at a talent quest in 1967. I was 14 years old. I subsequently played semi-regularly at a Friday night coffee shop run by the Methodist Church in Ulverstone, in Tasmania’s North-west. (An alternative venue was run by the local Catholic church, and featured the youthful Neil Gardner and Mike Raine). Along the way I was inspired by “gods” as diverse as Odetta, Theo Bikel, Joan Baez, Buffy Ste Marie, Donovan, Pete Seeger and Cat Stevens (!).

Over the next few years – as a soloist and member of numerous ensembles (including a shortlived jug band) – I had the good fortune to become part of a highly creative scene that centred around venues like the Gateway, the Eastside, the Tavern, the Folk Inn and the Napoli, and culminated in a series of folk festivals and concerts mounted by the Tasmanian arts organisation Brumida in 1970-72. After moving to Melbourne in the early 70s, I played occasionally at venues like the Outpost Inn, the Green Man and the Bottom Pub (Longford, Tas), and for several years sang as a duo with Gwen Schultz. Making Music subsequently took a back seat to work and “life”.

After a two decade break, I have resumed playing (in a low key way) in the last few years as an adjunct to my research into the history of the folk revival. Highlights of “this time around” have been the chance to meet (and, in some cases, perform with) some of my musical heroes and annual pilgrimages to the Tamar Valley Folk Festival. My CD outings have included Goodness How the Years Have Flown (Cracked Records, 2003), Dabbling in Philosophy (Park Fraser Records, 2006) and, most recently, A Little Folk Noir (Park Fraser Records, 2007). I confess to a particular affection for Break of Day, a collaborative exercise which enabled me to record with revival legends David Lumsden, Martin Evely and the late Lenore Somerset. (Recorded simply and mostly in single takes, in the style of so many classic folk LPs of the “golden age”, Break of Day is a heartfelt collection of our favourite settings of Henry Lawson verse).