Duke Tritton sings ‘The Gooseneck Spurs’. Meredith Collection NLA. This is a classic lambing down song where the besozzled bushman discovers all his personal belongings, including his horse, bridle and dog, have ‘jumped the bar’ – in other words, have gone to pay for his endless drinking spree. It was a familiar tale of woe. As Duke says in his introduction to this live concert recordings, he called ihe song ‘The Gooseneck Spurs’ because that’s all he was wearing by the end of the drinking session. 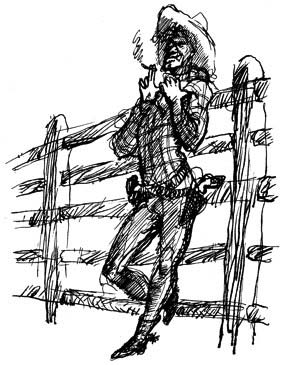 Hard drinking often fuelled the hard-working Australian bushmen of our pioneering era. In remote communities, and there were many, the local shanty or pub was the central meeting, eating and drinking place. The shanties, usually selling very inferior grog, were illegal but flourished on the belief they were better than nothing. The hotels or pubs, a step up from the shanty, usually offering accommodation and meals, and sometimes entertainment, were also seen as clearing houses for information and gossip: unofficial bush telegraph depots. The favoured alcohol in the shanties was a dubious mix of cheap spirits and slops, while the hotels mainly served up Dutch Gin and Jamaican Rum. Ale was also popular but, considering the extreme Australian heat, the brew did not become widely popular until the introduction of cooling systems.

Two of the more expressive terms for outback drinking dens were poison shops and lambing down shops.

To lamb down meant ‘to spend money (on alcohol), on a spree, or lavishly’ (Sidney J. Baker: ‘The Australian Language’). Unfortunately many shanty operators saw this as a challenge: to pry as much money out of their enthusiastic customers as possible, in the shortest possible time.

One of the reasons for the success of the lambing down shops and their lambing down operators was the difficulty of available and reliable transport to larger towns and the cities. The introduction of railways networks, particularly in the 1970s, solved much of the problem, enabling the bush workers to actually travel distance without the temptation of sly-grog shanties. Before rail it was a much different scenario as shearers, drovers and other bush workers were paid off with a single cheque or gold coins, sometimes representing a year’s wages, or, at the least, a few month’s hard yakka, and the temptations were many.  Many the bushman passed these savings over the bar of a shanty and proceeded to drink it away. This pattern had been etched years earlier on the goldfields where men ‘struck it rich’ only to see their nuggets disappear in shanty tents. Those that made it to the big towns usually lost it to horse racing and cadgers.

Hardened drinkers, and there were lots of them in such a male-dominated society, would tell the barman to inform them when the money had covered three days, or a week, or, sadly, when it had run out.  These men would drink for weeks and then, blind drunk, would be told their ‘cheque had cut out’. Some establishments had what was known as a ‘dead house’, a separate room or shed at the back of the building, where the unfortunates would be thrown to ‘drink it off’.

A day later, still woozy from the alcohol, the men would stagger off to return to the next season of work.

If they had wisely decided on a three-day spree and had a partly honest operator (or a few powerful muscles), they would get the balance of their cheque and move on, often to another drinking establishment.

To have one’s horse and bridle ‘jump the bar’ was another old expression, referring to the boozer who, in his stupor, agrees to ‘sell’ the horse and trappings to the shanty keeper for more grog. Most such decisions were made in desperation and in an alcoholic state.

Crafty shanty operators also devised tricks to get the last penny out of their inebriated clientele. One trick, according to Clarrie Peters, who I recorded in 1974, was for the landlord to bake the cheque in the oven before handing it over – after a day or two’s hard riding the cheque would have disintegrated to dust.

Australians delighted in anointing certain drinks with names.
There was even a drink named for Lola Montez, the exotic dancer who toured here (with her Spider Dance) in the goldrush era. The ‘Lola Montez’ was made with rum, ginger, lemon and hot water.

There were other exotic drinks. The ‘Diamantina Cocktail’ must have packed a punch: a pint of condensed milk, a pint of Bundaberg rum and a well-beaten emu egg. There was also the (joke) ‘Normanton cocktail’: a gin and two blankets.

Duke Tritton, the bush singer and author of ‘Time Means Tucker’, wrote an extremely funny and sadly graphic song, in 1905, (and one suspects there were some home truths in the tale) that he called ‘The Gooseneck Spurs’.

I’ve been in lots of trouble, I’ve been in tons of strife,
But the fix I was in at the Shingle Hut was the toughest of my life.
I’d dumped a mob of weaners at a place called leaning Gum,
I sang a ditty to my horse, ‘Oh, Sydney here I come.’

But I pulled up at the Shingle Hut, a little wayside pub;
Tired of mutton and damper, I wanted some decent grub,
The barmaid was a buxom lass, I thought her very nice –
You wouldn’t think, to look at her, but her heart was made of ice.

I handed her my hard-earned cheque, it was over fifty quid,
There was a quick gleam in her eye, but her thoughts she quickly hid.
She smiled at me so sweetly and said, “It’s getting late’;
I cannot cash your cheque today, now would you care to wait?

My husband won’t be home tonight, so stay you really must,
I’d feel much safer with you here, for you’re a man I’d trust.”
Then away went all my chances of seeing Sydney town,
For that barmaid was a trimmer at lambing fellows down.

I had one drink, or maybe two, I’m sure it was no more,
And I came to in the ‘dead house’, feeling sick and sore.
It was the barmaid woke me, with the toe of her little shoe.
“Get out!” she said, “you drunken mug, three days is enough for you.”

A big bloke stood behind her, a nasty looking brute;
I was too crook for brawling or I’d have jobbed the coot.
And the barmaid said, “Your cheque’s cut, you’d better make a shift;
Here is a bottle for the road, it is my parting gift.”

“All right,” I said, “I’ll get my horse, tonight I’ll travel far.”
“Oh no!” she laughed, “you can’t do that, your horse has jumped the bar.”
And so it had. My saddle too; likewise my swag and dog,
No doubt she had me corned like a possum in a log.

I wandered off into the scrub, I heard a dingo calling,
And soon I knew that I was lost and a heavy frost was falling.
I opened up the bottle and had a swig of rum,
It hit me like a hammer, my legs went weak and numb.

I knew that I had been stung again, my head went round and round;
I thought I saw the barmaid before I hit the ground.
And I awoke ‘neath a barbed-wire fence in a patch of Bathurst burrs,
With nothing to cover my freezing hide but a pair of gooseneck spurs.

Where did the term ‘lambing down’ originate and is it purely Australian? The term does appear to be Australian-born. Ralph Boldrewood used it in ‘The Crooked Stick’ (1895) describing it as a ‘rather old-fashioned bush pleasantry”. Marcus Clarke used it in ‘Colonial City’ in 1869 “to lamb down – that is, to make drunk and incapable – (suggesting) – of course originating with some shepherd.” G.H. Gibson (‘Ironbark’) also used it in a poem published in ‘Southerly Busters ‘, 1878,  “He got upon the spree/And publicans was awful cheats/For soon lamm’d down was he.” Joseph Furphy’s use in ‘Such Is Life’ (1903) probably sums it up: ‘The lambing down of two stalwart fencers by a pimply old shanty keeper.’

Nowadays it is the hotel poker machines that do the ‘lambing down’.