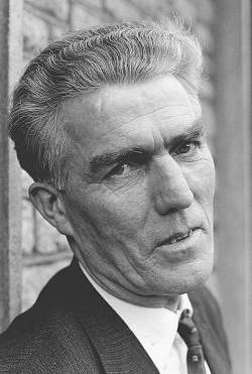 In the late 1970s the traditional singer and storyteller Joe Heaney visited Australia to perform at one of the Larrikin Folklife Festivals. It was the first and only time the folklife festival filled the Sydney Opera House Concert Hall.

Imagine that – an unaccompanied Irish singer and storyteller filling the Opera House. I first came across Joe Heaney through a recording on the Topic Record label and was struck by his clarity of singing and his repertoire of songs. This LP only skimmed the surface of Joe’s unbelievably extensive repertoire. I wanted to have Joe in the festival because he represented the true traditional singer. On arrival I arranged for the Sydney Morning Herald to feature a smiling photograph of Joe on the front page of the morning paper – and it worked. The telephones went crazy with bookings. When Joe walked out on the stage the audience erupted and when he finished he received a standing ovation. It was a rare opportunity to hear the tradition in action.

Listen to the concert and enjoy one of the world’s great folk singers.

I am eternally grateful to Davis Mulhallen, my producer associate at the ABC for many years, for his editing of the concert and for saving it for posterity.

Here is a video of Joe, introduced by Robin Williamson of the Incredible String Band – Robin and his group appeared at the same Larrikin Folklife Concert at the Sydney Opera House. It’s wonderful to see Joe in action live.

A native of Carna, County Galway, Ireland, Ó hÉanaí spent much of his life living in England, Scotland and in New York City. From 1982 until 1984, Ó hÉanaí was an artist-in-residence at the University of Washington in Seattle. The Joe Heaney Collection of the University of Washington Ethnomusicology Archives was established after Ó hÉanaí’s death in 1984. The Féile Chomórtha Joe Éinniú (Joe Heaney Commemorative Festival) is held every year in Carna.

He was recorded by Pádraic Ó Raghallaigh for Raidió Teilifís Éireann, and by Peter Kennedy for the BBC in 1959. The BBC recordings were assembled on a BBC LP, not commercially issued, as BBC LP 22570.
For a detailed interview and overview of Joe Heaney’s life and music visit http://www.mustrad.org.uk/articles/heaney.htm