It has been said that Australians are ‘sports crazy’.This section has songs, stories, jokes and lore associated with sport.

Warren Fahey sings ‘Tommy Corrigan’ – a song he recorded from Joe Watson is 1973.

This song is in the first person and the voice of a jockey about to enter a horse race in the bush.

Warren Fahey sings ‘The Death of Willie Stone’, a song he collected from the singing of Cyril Duncan, Qld, 1973. 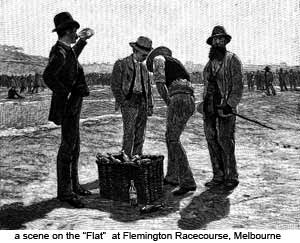 From The Australian Sportsman newspaper 1883.
On Queens Birthday weekend race day at Randwick.

They’ve cantered o’er the springy turf, they’ve mustered at the post
Each backer seeks with eager eye the steed he loves the most
The Birthday breeze has kissed their manes beloved
While the golden sun comes bursting from his ambush up above
And never gave the promise that his glory he would fling
On a struggle that was starker since the days when Charles was King

From a pre race form guide as above.
Hark! Hark! the bell is ringing to the paddock let’s away
Where four and twenty youngsters are saddling for the fray.

Pledge from the Cup this first Australian prize
May each revolving year the races bring
That training horses from these sports may rise
Health to the patrons and long live the King.

From Tom Ronan’s autobiography ‘Deep of the Sky’ 1962.
I have collected this song on three occasions. Refer Joe Watson transcripts in Australian Folklore Unit for complete text.

At the turn of the straight
A good horse met his fate
And the best of the jockey boys died
Mark the spot well
Where old Silvermine fell
And poor Alec Robertson had his last ride.

They marked the spot well where Silvermine fell and poor Alex Robertson died.

Now come around jockey boys, hang down your heads,

With a tear in your eye, let it fall, we’ll all shed a tear for the one who was near,

He was the dearest and bravest of all.

The following horse-racing song has words and music by Joseph John O’Neill and introduced in the vaudeville show ‘Two Colliers’.

I have not been able to ascertain where Blackshaw’s famous course was situated in Goulburn however this fragment remains to encourage further research. 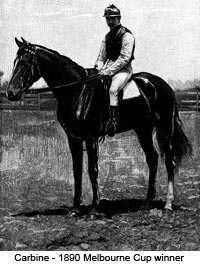 “A NEW AND POPULAR BALLAD sung at the concert halls to the rapturous and drunken applause of the enlightened audiences.” Okay, I have to admit that this song, from Colonial Society, has me puzzled. I suspect the Hasses is the name of a regiment or could it be a reference to ‘asses’ or ‘arses’ ? I will keep exploring this one.