History of the Biscuit in Australia

THE HISTORY OF THE BISCUIT IN AUSTRALIA

The first biscuits in Australia were as hard as nails and, by all accounts, tasted dreadful. They were ‘sea biscuits’, or as the old time sailors called them ‘hard tack’ or ‘ship’s biscuits’ because they were such a standby for early sailors. The word ‘tack’ was already in use to describe any ship’s food. The ‘sea biscuit’ had been introduced into the British Navy in the 17th century and was traditionally made with flour, water and salt. They had an extremely long shelf life and were the saviour of many the sailor blown off course without sufficient rations. The biscuits, along with salted beef, were the staple diet and prepared in several ways to make them digestible.

The first task was to smash the biscuit with a hammer to render it into powder form (yes, they were that hard!). The powder (sometimes called ’dust’ and this possibly explains why some bushmen called flour by the same name) was then mixed with water and whatever was available to provide taste. A popular method was to mix the powder with pig’s blood, egg powder more flour and salt, and then fashion them into large pancakes which were fried in pig’s fat. These were called ‘blood pancakes’. Another recipe saw the powder soaked in water with raisins to make ‘dandy funk’.  If there was nothing to mix with the powder it was simply mixed with water and eaten like a gruel known as ‘cracker hash’.

The biscuits were also eaten straight from the ‘packet’- which, in this case, would have been a barrel. They were prone to weevil infestation that might have added something to the taste!

If eaten as biscuits they were more likely dipped in water, tea, coffee or even brine. They were also served with the sailor’s basic stew or soup slop. It must be remembered that the general standard of dental health was bad so consumption of the biscuits must have been hard going for most sailors.

A few of the early sea biscuits have survived in museums because they had been painted on  – the sailors used the hard biscuits to paint maritime scenes of whale hunting, sailors relaxing, Jack ashore pictures etc similar to scrimjaw and sea-chest paintings. The painted biscuits were usually sold to buy drinks when they went ashore.

Hard Tack Biscuits were important to the fledgling colony of Botany Bay, especially when it experienced lean times. By the goldrushes of the 1950s flour replaced the need for biscuits and we developed many damper recipes to fill our empty bellies.

In 1847 a young Scotsman called William Arnott migrated with his brother David to the colony and set up a small bakery shop in Newcastle, north of Sydney. In 1867 he converted the shop to a  small factory and installed rotary coke-powered ovens. The first biscuits to be made by Arnott’s were called ‘Thin Captains’ which were the biscuit maker’s version of the sea biscuit. Newcastle, an extremely busy shipping port, saw Arnott’s ‘sea biscuits’ an immediate success and the company soon became a colonial success shipping biscuits across the colony, and eventually the world. Like many Australian companies it was eventually purchased by an American company; in this case the giant Campbell’s Soup. Mind you, before Arnott’s was swallowed up the company itself had taken over Brokoff and Swallow’s Biscuits from Victoria.

The biscuit shelves of supermarkets now offer rows and rows of biscuits.  It wasn’t always so.

The first popular biscuits were essentially what we refer to as ‘plain biscuits’. These biscuits were either sweet or savoury and retailed in bulk. The distinctive brightly decorated Arnott’s Biscuits tins with the iconic rainbow lorikeet image became an important part of our retail culture and was even extended to the Arnott’s delivery trucks.

Considering the vast quantity of tea and coffee consumed in the 19th and 20th centuries it is probably not surprising that our biscuit consumption (where available) was extremely high. (I refer readers to the articles section of the site where a history of tea and coffee drinking is available.). Older Australians will find it easy to imagine the ‘tea ladies’ who pushed their trolleys down factory and office aisles and the ‘honour’ system whereby those who took biscuits would put some money into the kitty. The usual rate was twenty pence a day.

Corner shops, before shopping malls and convenience stores, were usually well-run family businesses. No self service here as uniformed mum and dad responded to your shopping list. The biscuits were served either from the tins or from the ‘broken biscuit box’.  The latter being considerably cheaper. 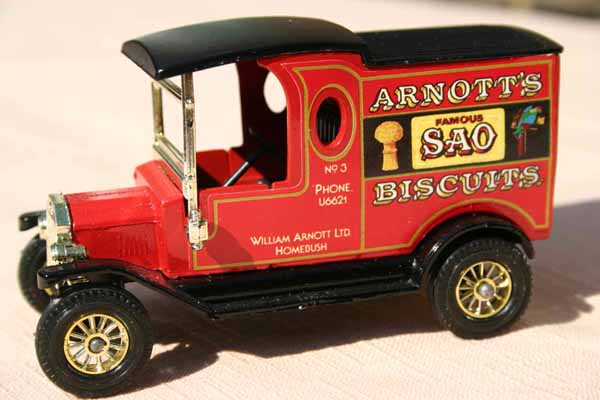 Australians enthusiastically bring certain words to an affectionate abbreviation. Kevin becomes Kev, Barry Baz, banana nana, and so on. Biscuits are regularly referred to as ‘bickies’.

Neither Wilkes or Baker provides clues of when this slang first appeared. They do agree that it is used in the context: “Do you want some tea and bickies?” and that it has also entered our colloquial language to mean large amounts of money = “he was holding big bickies.” And in statements such as “he was not the full packet of biscuits.”

In the latter half of the 19th century and well into the 20th, weekly baking of cakes, bread and biscuits was common. Many of the early biscuits were variations on a theme – no self-respecting Australian woman, in the city or bush, would want to be caught out without a stash of biscuits in case friends arrived unannounced.

Women baked every week and usually made two or three-dozen biscuits ‘for the biscuit tin’. As society changed, especially after Federation, to reflect new labour-saving household inventions, the availability of electricity and gas, and the reality that women could also work in factories and offices, the introduction of commercially manufactured biscuits was well received.

There was also a snob factor, especially after WW1, with women preferring to offer neater, uniform biscuits rather than rough homemade biscuits. They had seen the ‘perfect hostess’ handing around a dish of Arnott’s – to everyone’s apparent delight. This move to manufactured brand biscuits also reflected the importance placed on morning and afternoon tea.

William Arnott’s ‘Bush Biscuit’ (still available in South Australia as late as 1998) was developed as a more acceptable ‘sea biscuit’ that would travel well in the outback, was versatile like its ancestor and was long-lasting. They were golden brown, oblong shaped and offered a plain taste. These biscuits seem to have appeared in the South Australian market around the late 1920s. Older Australians recalled buying them at school ‘tuckshops’, local swimming pools and corner stores. They were usually covered in butter and one popular version had the biscuit with fritz (ham sausage) on one end and a slice of cheese on the other.
The SAO ruled supreme in the Australian biscuit market for many decades and is still sold today. Legend has it that the letters stood for Salvation Army Officer and, considering one of the Arnott boys was a prolific writer of Salvation Army hymns, it is highly likely. They were eaten with savoury and sweet and, for a short time in the 1970’s found favour in a recipe for vanilla slice – they were whoppers and usually covered with bright pink icing to add to their grotesque appearance.

Western’s Wagon Wheels were extremely popular because they were the first biscuit to be sold at picture theatres. Individually wrapped, large ‘wagon wheel’ shaped, these were an ideal sweet for kids about to see the next exciting serial of Hopalong Cassidy.
My sister, eight year’s older than me, was figure-conscious and seemed to live on Vita-Wheat biscuits. These were extremely thin yet hardy plain biscuits. She had vegemite on hers and I had peanut butter which I would use to make ‘worms’ by pressing the paste between the biscuits until the worms started to appear.

The Biscuit Hall of Fame would also feature:

Of course, there is one major omission from the above list and that is the renowned Anzac Biscuit. The fact is the commercially manufactured Anzac’s don’t look or taste quite like the homemade number. There is some argument whether the Anzac Biscuit was created in Australia or New Zealand, suffice to say we can both claim them with iconic pride.  Whatever the origin the biscuits are always round, flat and carry the essential ingredients of rolled oats, treacle, flour and salt. They were originally created in WW1 because the “boys at the front needed something sweet from home, presumably made with loving care by the women at home.” They were also the round, flat shape because they were often mailed over in billycans. The biscuits, wrapped in brown grease-proof paper, could last for months.

Biscuits come in square, rectangle, oval, round & animal shapes. They are large and tiny and the supermarket shelves are always bulging with stock.  We Australians, thankfully, continue to call these confections ‘biscuits’ and despite continual exposure to American television, and a barrage of marketing campaigns, we refuse to succumb to ‘cookies’ 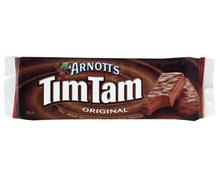 The big success of the Australian biscuit world is the Tim Tam. A rectangular, chocolate covered biscuit this confectionary now comes in specialty flavours.

Around 30 million packs of this chockie bikkie are sold each year – that’s nearly 300 million biscuits, or two packets for every Australian. On a per capita basis, they are the world’s biggest-selling chocolate biscuits.  And in case you were wondering:

Tim Tams were first launched in 1963.  They were named after a horse that ran in the Kentucky Derby in 1958.  A member of the Arnott family, Ross Arnott, attended the race day and decided ‘Tim Tam’ was the perfect name for the new biscuit he was about to launch.
Enthusiasts for the biscuit say that a taste sensation can be obtained by biting off one end and sucking tea or coffee through the biscuit.

I think I’ll stick with my Vita-wheat worms. 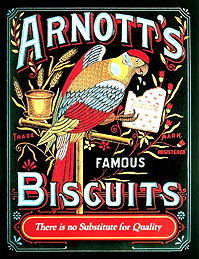