God in the Bush


GOD HELP US – RELIGION IN THE BUSH At the Temperance Hall

The 2016 census found a large majority of Australians entered ‘no religion’ on the census form. I was tempted to put ‘Callithumpian’ on mine.

In 2009 the Australian Concise Oxford Dictionary deemed ‘Callithumpian’ its ‘Australian word of the month’, explaining its history –

In 1892 the Sydney Truth newspaper asked: ‘What are calathumpians? There are four of them in New South Wales. Who founded that religion? It is not known in England.’ The next time we encounter the term calathumpian is in the Adelaide Advertiser in 1903 as the name of an Australian Rules Football team called the ‘Calathumpian Rovers’. By 1925 in the Sydney Truth, the Australian sense is becoming clearer: ‘Whether Mr Hartigan is a Catholic, Congregationalist, or Calathumpian doesn’t matter a tinker’s cuss to the average Australian.’ In later uses (and usually with the spelling Callithumpian) the term is sometimes used as the equivalent of a generic ‘religious beliefs of any kind’: ‘Tony Abbot has not disguised the fact that the objective is to reduce the rate of abortions in Australia. What’s wrong with setting up an anti-abortion counselling service— whether the counsellors are Muslim, Catholic or Callithumpian?’ (Australian, 2 January 2007). By the 1970s, callithumpian broadened from its earlier religious focus, and came to be used also to refer to beliefs (especially political) of any kind. Here is a very typical political instance: ‘He hoped that the euthanasia debate would not become politicised as it was not about “Labor, Liberal, National Party, Callithumpian”’ (Australian, 30 September, 1996). The following example alludes to economic views: ‘Results from these formal models always rest heavily on the model-builder’s assumptions—including their prior beliefs about whether the economy works in a neoclassical or Keynesian or Callithumpian way’ (Sydney Morning Herald, 18 June 2007). All these uses of callithumpian are Australian. The word exists in American English, but there it has a very different meaning. It designates a band made up of discordant instruments ‘such as tin horns, bells, rattles and similar instruments’. Such bands are used in merrymaking on occasions such as New Year’s Eve or the Fourth of July, and in the past they were sometimes used by a community that disapproved of a marriage or was jokingly celebrating a marriage— much like the European charivari. The Australian and American uses, with such different meanings, go back to an identical British dialect word gallithumpian. The gally part of the word probably means ‘to frighten, scare; to confuse with noise’, and thump means ‘to beat’. This would explain the origin of the raucous sounds of the American callithumpian band. It does not so easily explain the Australian callithumpian. The English Dialect Dictionary provides two clues. First, in Lancashire, Dorset, and Devon in the nineteenth century, the gallithumpians were ‘a society of social reformers’. Secondly, in Dorset and Devon in the eighteenth century the gallithumpians were ‘disturbers of order at parliamentary elections’. It was from these political and social rebels that the Australian callithumpians developed, although they were often people (unlike their British forebears) who did not want to make known the precise nature of their political, social, or political beliefs.

I had the word from my father, George Fahey, who often referred to himself as a ‘Callithumpian’. I hadn’t thought of the word for decades. In truth, my father, although raised a Roman Catholic, was an atheist, and, at one stage, a member of the Rationalists Association of New South Wales.

It’s interesting to speculate on the history and role of religion in early Australia. Certainly, the convict class, feeling remorse, and also the restrictions of incarceration, understandably often turned to God for relief. Church attendance for convicts was compulsory. Those indentured on farms and workhouses were also expected to attend a weekly church service. Considering the convicts were expected to wash and, for the men, shave, church was possibly seen by the authorities as an opportunity to improve the overall health of the community.

As a penal colony, New South Wales was portrayed as being next to Hell. Religion was seen as part of the system and attendance and observation part of the convict’s return journey to ‘civilised’ society. Despatches from the young Colony also told of debauchery between the sexes. This ‘convict stain’ also spread to the other colonies who had convicts. Convict free South Australia was viewed as a much safer place for emigration, especially for women. Adelaide was, of course, doubly blessed with a reputation of ‘city of churches’.

Many of the transportation ballads call on God for forgiveness or, as in several of the Come All Ye type of song, end with ‘Thank God I am set free.” Back in NSW the Reverend Samuel Marsden was probably not a good poster boy for his church. Known as the ‘Flogging Parson’ he has gone down in history as unnecessarily cruel and seemingly intent on ‘converting’ his convicts through thrashings with the ‘cat-o-nine-tails whip.

It is surprising there are no songs ridiculing this clergyman.

Samuel Marsden (25 June 1765 – 12 May 1838) was an English born Anglican cleric and a prominent member of the Church Missionary Society, believed to have introduced Christianity to New Zealand. He was a prominent figure in NSW history and was senior Anglican cleric, but also for his employment of convicts for farming and his actions as a magistrate at Parramatta, both of which attracted contemporary criticism.

Who raised a ruckus at Castle Hill, who there defied the crown?
‘Twas the same rebel boys who in ’98 ‘gainst odds would not lie down.
Oh, but they made Samuel Marsden fret and ruffled silver tails,
Why, the words “Croppy Pike” were enough to strike fear into New South Wales.

Kenneth Slessor also recalled the man in Vesper Song of the Reverend Samuel Marsden including the lines Lord, I have sung with ceaseless lips

Lord, I have sung with ceaseless lips
A tinker’s litany of whips,

The early settlers also looked out for higher assistance. Loneliness played on the soul of early settlements. There is probably nothing like loneliness to dance on the conscience and to make one think of a higher being. Misfortune such as drought, bushfire, death and so forth needed a reason so that the survivors could continue living. Certainly, many of diaries of early settlers and itinerant workers referred to God. Others preferred to rely on humour for survival.

The discovery of gold in 1851 didn’t do much to promote the Lord. On the contrary, most diggers only had one thing on their mind – gold. Grog would have run a good second and there were a lot more drinking shanties on the goldfields than prayer tents.

Newspaper reports point to the difficulty of attracting sufficient miners to regular goldfield services. In some cases the ministers abandoned the Lord in favour of hunting for gold.When gold petered out the diggers moved to a new rush, however, some stayed behind and the nucleus of a town replaced the tent city. Most large gold towns, if one could call them ‘towns’, had a community hall, general store, post office and a newspaper office.

When gold petered out the diggers moved to a new rush, however, some stayed behind and the nucleus of a town replaced the tent city. Most large gold towns, if one could call them ‘towns’, had a community hall, general store, post office and a newspaper office. With permanency, the next building was usually a church, often a shared facility catering for various faiths.

What we do know is that from the goldrush onwards a seemingly never-ending flow of evangelical ministers arrived to ‘save souls for their Lord’.

Community churches, and they came in all shapes and sizes, often built by volunteer labour, became a focus of many communities because of the necessities of birth, death and marriage. At the same time distance, as always in Australia, was a major problem. There was also the demanding nature of outback life – farming, husbands away working, sick stock, bad weather etc. That said, the church was an opportunity for socialising, especially for young people, a rarity in early outback Australia. 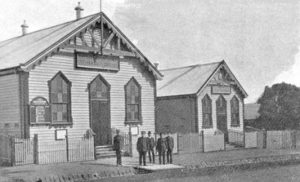 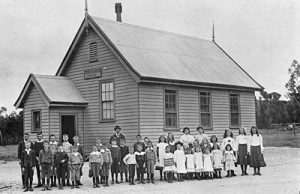 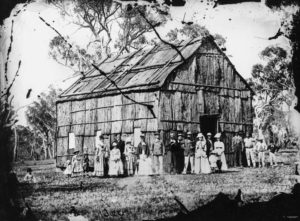 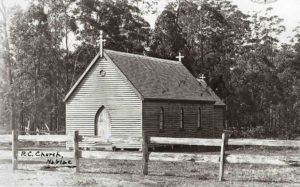 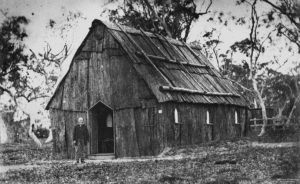 and the winning church is this wattle and daub hut. What a cracker!

and here what was happening in the Big Smoke – an early depiction of St Mary’s Church – which became St Mary’s Cathedral.

Churches were also educators with some religions establishing schools. Some of the larger old towns like Bendigo, Ballarat, Goulburn and Bathurst built exceptionally large schools. The Methodist and Presbyterian were also active in establishing Sunday Schools. Many early travelling clergy also staged magic lantern shows – often with bible slides – to assist their work. Reverend John Flynn, known as ‘Flynn of the Outback’, had an extensive range of magic lantern slides, including general interest programs.

Many of the travelling clergy were often of the fire and brimstone variety, no doubt outraged by the Australian consumption of alcohol. Later in the 19th century, the Temperance Societies toured such preachers. Singing against wicked alcohol was part of their service and the T.S. published its own songbooks. The songs were fairly ordinary and many adapted from those of their British and American counterpart organisations. 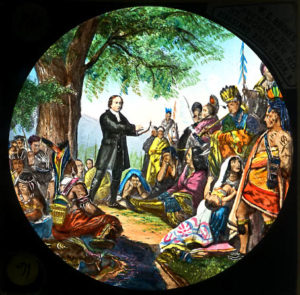 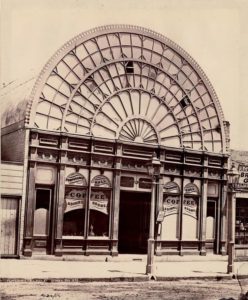 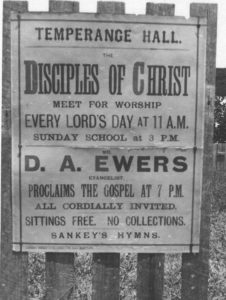 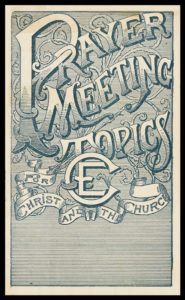 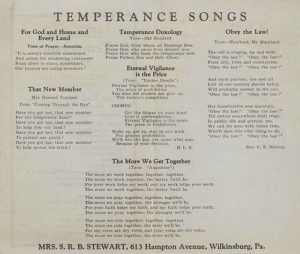 NEW TOTAL ABSTINENCE PUBLICATION.-A “Tasmanian Total Abstinence Song Book” has just been published. As a specimen of the production, we give the following. By the way, is it not a pity to omit the tune to which these striking verses should be sung.’

Ye moderation muddlers, Ye are the seed that raise the breed

Of regular drunken fuddlers. You all preach up a little sup,

And think you’re mighty sure all ; You talk away, but still we say,

” Abstain’s the only cure all.”

The Salvation Army also thought to save souls and was particularly active in Australia. General Booth toured twice. Salvation Army bands are covered in the Musical Instrument section of this site.