Small, privately owned railways started to cover the colonies. Some went bankrupt soon after opening business and most were destined to fall into government hands. It is the private nature of our railways that resulted in so many differences in track width. The great debate on railway gauges was continued for over a hundred years.

The arrival of the daily train into most country towns was a real event especially since it delivered mail and newspapers and contact with the rest of Australia and the world.

The grandly dressed stationmaster supervised everything until final loading, slamming of doors, blowing of the official whistle and waving the all-clear flag. These were men of notoriety, men of respect.

Picture this scenario:
Farmer Dave: – A Queensland cocky attempting to buy a ticket to Townsville at his local rail station.
Station Master – an over-officious zealot

SM:     Next, please!
Dave: Townsville return , please
SM:      That is an overnight train, sir, sleeper?
Dave: Arhhh – yes, please
SM:     Upper or Lower berth, sir?
Dave: Arhhh is there a difference?
SM:     Yes, of course there is a difference.
Dave: Arrhhh what’s the difference?
SM:     There’s a dif of seventy cents
Dave: Why’s that?
SM:      The Lower is higher than the Upper.
Dave: Eh?
SM:  &nb:sp;   The higher price is for the Lower
Dave: Eh?
SM:      If you want a berth Lower, you’ll have to go higher
Dave: What?
SM      We sell the Upper lower than the Lower. In other words, the higher, the lower
Dave: Ehhh?
SM:      Sir, when you ocvcupy an Upper you have to get up to lie downand get down when you get up.
Dave: errhhh?
SM:      You can have the Lower if you pay higher. The Upper is lower than the Lower because it is higher. If you’re willing to go higher, it’ll be lower!
Dave: Awww. Struth! Forget the bloody sleeper, I’m getting giddy already. How much to sit up all night?

Early train travellers were a superstitious lot. Folklore is one of the devices they use when expressing fear or doubt. Here are a few superstitions related top train travel:

A trip that begins on a Monday brings bad luck
Hitting your right leg when travelling on a train is good luck
If you hit your left leg then turn around, go home and start again
Start a journey on Friday and you will never return
Always carry salt for good luck77
If you begin a trip on a Saturday you will return soon 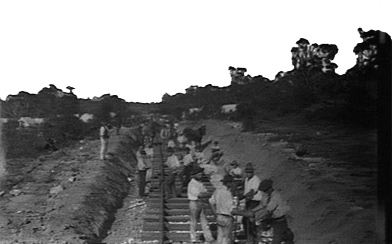 Trains carried people, all manner of supplies and livestock and even ice from ‘ice ships’ that had sailed down from Boston to Melbourne then160 miles to the Ballarat and Bendigo goldfields. This ice melted by half but very much in demand at the hotels and cafes and at very high prices

In the 1860s railway activity boomed. It was seen more as a means of relocating wool, wheat and other rural crops. Mining also started to use locomotives to shift coal and ore.

People were still suspicious of the trains.

It wasn’t until around 1910 that rail travel became extremely popular but prior to that it called for a new alertness. Believe it or not, few passengers realised how dangerous it was to stick your head out of a window to look at an approaching tunnel.

Hints for intending train travellers were drawn up by a Rev Canon Wilson of Melbourne.