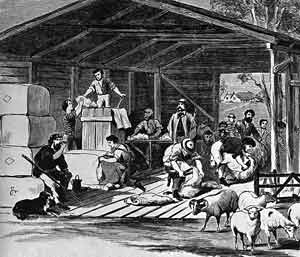 Pioneering Australians had a reputation for hard work and hard play and there are numerous songs, poems and yarns about excessive drining but none can come up to the story of the shearer, Bill Brink, who drank ‘acid with never a wink’.

There have been several versions of this comic song collected and one can imagine how the story would have made many the hardened drinker smile with recognition. One is reminded of the old yarn where the swag carrier, with a face as dry as the One Man Plain, sides up to a drover and says,
“Could you spare a traveller a drop of beer?”
The drover, not being too flash with cash, pushes the glass in the stranger’s direction and nods. Sure enough the swaggie tilts the glass and drinks it all down in one gulp.
“Struth!” said the drover, “I thought you only wanted a drop!”
“Yes,” responded the swaggie, “but it was the drop at the bottom!

There once was a shearer by the name of Bill Brink,
A devil for work and a devil for drink,
He’d shear his two hundred a day without fear
And he’d drink without stopping two gallons of beer.

When the pub opened up he was very first in
Roaring for whisky and howling for gin,
Saying, “Jimmy, my boy, I’m dying of thirst,
Whatever you’ve got here just give to me first.”

Now Jimmy the barman who served him the rum
Hated the sight of old Billy the bum,
He came up too late, he came up too soon,
At morning, at evening, at night and at noon.

Now Jimmy the barman was cleaning the bar
With sulphuric acid locked up in a jar,
He poured him a measure into a small glass,
Saying, “After this drink you will surely say ‘Pass’.”‘

“Well,” says Billy to Jimmy, “the stuff it tastes fine.
She’s a new kind of liquor or whisky or wine.
Yes, that’s the stuff. Jimmy, I’m as strong as a Turk,
I’ll break all the records today at my work.”

Well, all that day long there was Jim at the bar,
Roaring and trembling with a terrible fear,
Too eager to argue, too anxious to fight,
For he pictured the corpse of old Bill in his sight.

But early next mom there was Bill as before,
Roaring and bawling and howling for more,
His eyeballs were singed and his whiskers deranged,
He had holes in his hide like a dog with the mange.

Said Billy to Jimmy, “She sure was fine stuff,
It made me feel well but I ain’t had enough.
It started me coughing, you know I’m no liar,
And every damn cough set my whiskers on fire.”

Anonymous. From the singing of Simon McDonald, Creswick, Victoria, and collected by Norm O’Connor and Mary-Jean Officer and included in Hugh Anderson’s book Time Out of Mind, 1974.