[ This paper was originally published, in six parts, in TRAD & NOW Magazine]

I suspect that debate over the relative merits, importance and long-term influence of the early Melbourne and Sydney folk scenes has always been coloured by well-entrenched intercity rivalry. More puritanical elements within the southern folk fraternity have maintained loftily that Melbourne had a monopoly on “real folksingers” whereas Sydney offered (and apparently preferred) the folksinger as entertainer. Sydney had stars, folksingers on TV and events like the big U.S.-style 1965 Newport hootenanny. “In Sydney folk seemed to soar like a rocket then after a couple of years went down … like a bomb”, declared Brian Mooney soon after the event.

Predictably the Sydney scene has had its defenders, including the late Don Henderson 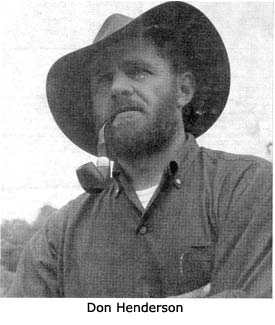 who, albeit Melbourne born and bred, had little respect for the folk venues there. (“… I never liked Melbourne audiences … never liked singing there … never liked Melbourne as a town”). “I never knew there was a Melbourne folk scene then”, confesses second generation Sydney folkie Chris Shaw. While it is indisputable that folksinging attracted substantial audiences to coffee lounge in Melbourne long after it had become passe in Sydney (licensing laws, the relative strength of the local jazz and bohemian enclaves, even differences in the weather, were among factors at play), folklorist Edgar Waters has noted that the northern metropolis eclipsed its sister city in one important regard: early consciousness of the hinterland and interest in home-grown folklore. “There was definitely a pioneering feel about it all … people who were trying to push it that one step further at a time when Australiana was sneered at”, observes Gary Shearston. In hindsight, Sydney also produced some of the most important individual folk artists of the 1960s (Shearston among them) and provided unprecedented media exposure for performers from all over the country per TV outlets like Dave’s Place, Just Folk or Bandstand. This paper looks at contributions made by some key players (performers and others) to the Sydney scene during “the folk years”.

Melbourne-born jazz vocalist Marian Grossman, who moved to Sydney in 1959 following her marriage to fledgling singer-songwriter Don Henderson, has recalled: “If you mentioned folksinging in those days, people looked at you as though you were funny”. In fact there was rather more activity than was immediately apparent. Simultaneous with John Meredith’s pioneering fieldwork, the success of Reedy River, the formation of the Sydney Bush Music Club and Folklore Society, and the launch of Wattle Records, a small but discernible underground folk community was emerging. In the late 1940s, Jeff Way, an electrical engineer, played guitar and banjo in the upstairs room of the New Theatre in Castlereagh Street. The proud possessor of previously unheard records from the Library of Congress or by The Almanac Singers, Way is remembered for his renditions of (then) new and captivating material like ‘The St James Infirmary’, ‘That was News’ and ‘Black, Brown and Blue’. Way taught guitar basics to Chris Kempster and another young enthusiast, Terry Driscoll, who subsequently became a skilled classical instrumentalist largely through listening to Segovia records. The son of teachers who were active in the CPA, Kempster attended Eurekas Youth League camps from an early age, and learned folk dances and international songs, like ‘Peat Bog Soldiers’, from enthusiasts like Brian Loughlin and Peggy Hewett).

The Lincoln coffee lounge was a meeting-place for the inner-city “arty” set as early as 1950. Although never an actual music venue, the Lincoln produced its own roneo’d songbook containing drinking songs, Gershwin’s ‘It Ain’t Necessarily So’ and a parody of ‘The Streets of Laredo’ which included the lines:

In the days of my youth I used to go drinkin’
Twas first to the pub and then to the Lincoln
I thought I had friends but it happened this way,
They weren’t my friends cause they led me astray. 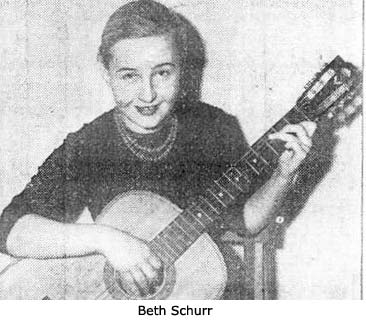 Beth and Reg Schurr were regulars at the Lincoln. With a superior light soprano voice and repertoire comparable to those of popular American balladeer Susan Reed, Mrs Schurr (nee Doran) taught herself guitar and started collecting songs after hearing Burl Ives and Mary O’Hara in concert. Specialising in material from Britain and the Appalachians, she gave her first major public performance at the first Australian Folklore Festival in September 1955. She recorded a couple of 78s for Wattle, most notably a lovely version of ‘Green Bushes’ (learned from the singing of Sally Sloane). TV appearances (TV was then in its infancy) led to her writing, compering and performing on a live-to-air children’s show for Channel 9 (and “for the princely sum of 5 pounds a week”). Her co-star was former child-actor Desmond Tester, who subsequently ran camel tours in the outback. Raising a family ultimately “put paid” to Schurr’s folksinging career, although she would continue to perform occasionally into the 1960s. Wendy Lowenstein credits her with being “a folksinger before her time”; had she debuted during the boom, she might well have been one of the stars of the revival. “Beth’s place in the scene came from an inborn talent”, writes Reg Schurr. “She had a good voice – and could sing in pitch – also learned to play the guitar and developed her own arrangements which were well beyond the usual hillbilly strumming. Bringing up a child scotched that!”. The Schurrs were early friends and patrons of Brian Mooney.
Barbara Lisyak, another Sydney housewife (her husband was a doctor at Ryde), appeared on TV with Beth Schurr and chaired the Australian Folklore Society for a couple of years. She has been credited (along with Jeff Way) with introducing the songs of the early American hootenannies – and the guitar as a folk instrument – to the general Australian public. Lisyak also recorded for Wattle, most notably, the children’s song ‘The Old Lady Who Swallowed a Fly’. According to the late Chris Kempster:

In those days the Seaman’s Union used to have dances down in their rooms near Circular Quay and there were great, large numbers, hundreds and hundreds of people … I remember at one dance, everything stopped and out came Jeff Way and Barbara Lisyak, each with a guitar, and Barbara sang ‘O Freedom’ … The way she just stood up and sang it with this beautiful … penetrating voice. That was a magic moment. The whole place was spellbound with Barbara singing.

Although she preferred singing international ballads, believing that “genuinely Australian folksongs” were better sung by men, Lisyak popularised a version of the bushranging song ‘Peter Clarke’ and sang for a while (1959-60) with The Rambleers, even appearing with them on The Snowy, an ABC TV celebration of the Snowy River power scheme. Lisyak and Beth Schurr sometimes shared platforms with a third woman singer, Frances Shaw, wife of poet A.D. Hope’s first publisher Rod Shaw. Shaw began performing French folksongs to her own guitar accompaniment in the early 1940s; her repertoire subsequently expanded to encompass Anglo-American ballads from the Cecil Sharp collection and Australian ballads per the Bush Music Club. Black tenor Harold Blair, a winner of the Sun Aria competition, recorded an early collection of aboriginal songs (to piano accompaniment). Mention should also be made of Shirley Abicair, a typist-turned-cabaret artist who became popular in Sydney in the late 1940s and subsequently achieved stardom as a nightclub and TV personality in London. Although her stage act, image and recordings had all the artificial trappings of the 1950s pop scene, Abicair specialised in interpreting folksongs, sometimes accompanying herself on the zither. Her recorded output included versions of ‘The Turtle Dove’, ‘Botany Bay’, ‘Johnny Has Gone for A Soldier’ and ‘The Fox’.

Other pioneer singers included Delia Murphy (an Irish diplomat’s wife), ‘Frank the Yank’ (the first 5-string banjoist to surface in Sydney), Johnny Earls (who went on to work as an anthropologist in Peru), and Bob Elliott, who reportedly “set an unmatched standard of performance of a range of songs from Australian to country blues”. (Obtaining guitars was a problem for early enthusiasts, necessitating “constant searching in hock shops”. Beth Schurr paid two pounds at a sale for her first, Italian-made instrument. Frances Shaw was the proud posessor of an antique Spanish guitar handcrafted in Paris in 1831). The Tavern, near Edgcliff Station, appears to have succeeded the Lincoln as an informal meeting-place for ‘the folk-oriented’, while early TV footage of Sydney’s Beat poetry, painting and improvisational jazz milieux indicates that singer-guitarists were performing at that bohemian mecca, the Royal George Hotel, circa 1959-60.