Only one venue appears to have challenged the dominance of the pubs, however. This was the revitalised PACT Folk.

In marked contrast to the intensely traditionalist orientation of the emergent pub clubs (and, of course, the BMC), it actively promoted itself as a showcase for contemporary music. Weekly (Saturday night) concerts were organised and presented, from early 1969, by Frank French, former owner of the Pigalle – first at the co-operative’s old Sussex Street premises (rather hazardous on rainy nights because of a leaking roof), then in the cellar of the YWCA in Liverpool Street. (“You had to go down many flights of stairs or in a lift”). French also initiated weekly (Thursday) evening workshops “at which the amateur finds himself in constructive discussion with the audience and other artists”. According to French (in Music Maker, Feb 1970), the venue “did not take off too well at first”:

Folk had been in the doldrums … and, basically, singers were still singing their old repertoire. We had a few discussions and then decided that we would switch from traditional folk by evolving a policy that would still allow the presentation of some traditional, but our major direction would be to attempt to organise classes in contemporary folk. Singers suddenly found that if they sang their own songs they were received better. All of a sudden people started to sit up and take notice, this was what put us back on the market again … [The] teenager of today … must have something to think about and is looking for something with a bit more body than the old style of folk singing … PACT Folk has become a sounding board for both singers and material, as the audience on an ordinary Saturday night is a very representative cross-section of involved Australians. If a singer goes on with one of her own songs and gets an 80% affirmative reaction, you can say she is on the right direction.

More than any other venue of the period – and under French’s direction – PACT Folk (according to Pattison & Mulhallen, Australian Music Directory, 1982, p.105):

“The music was just brilliant”, remembers Tasmanian singer Beth Sowter who spent a few months in Sydney in 1969, playing at PACT Folk (and elsewhere) in the group The Famous Cottonwood Patch. (Gary Greenwood was also a member). Sowter recalls French with particular warmth. At a time when the group was usually taking home a pittance from other gigs, “Frank would give us $10 because he knew we were starving … I have a soft spot for him. He looked after us” Marian Henderson concurs:

People went to stay overnight at Frank’s house when they had nowhere else to go … His day job was as a foreman in a plastics factory, which probably contributed to his death. He should have had a long life … Frank took over from Jimmy Carter though there were years in between. He was a bit of a fairy godfather. He organised a lot of work for a lot of people. Big folk festivals, concerts that were very very diverse. Without being pushy and taking any money for it, he would promote the people who worked for him as much as he could .

French had an advantage over businessmen like Jim Carter: “He didn’t have to live off it”, notes Mike McClellan. “He wasn’t an entrepreneur. He had a second career … He got involved in the music because he loved it and he loved the people. He was like a magnet … prepared to welcome new talent when it came in”. “A wonderful, wonderful man. I have the fondest memories of him”, states Doug Ashdown. 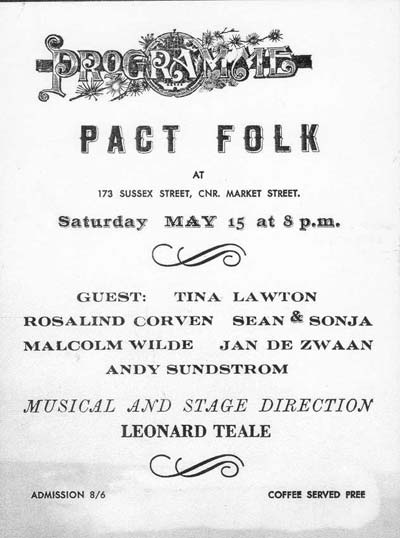 The outreach of the folk coffee lounges (and pub folk clubs) was augmented by periodic large-scale concerts and festivals. I have already noted the crowd-drawing Town Hall concerts staged by Jim Carter, and Carter’s hugely successful Newport extravaganza. Among other notable events were a hootenanny at Anzac House in May 1963, presented by the Folk Song Society of Sydney. Gary Shearston cites as significant a series of concerts mounted at Sydney University’s Union Theatre in conjunction with Charles Perkins’ Freedom Rides; highlights of other Union Theatre concerts (organised by the University’s Folk Song Society) were preserved by RCA as the LP Folk Concert on Campus. (Performers at these concerts included British singer traditional Roy Waterson and aboriginal rhythm’n’blues player Alan Moarywaalla. Moarywaalla, aka Alan Barker, hailed from Western Australia and had been a regular at the Royal George). The university Society was founded by Sylvia Haneman in 1963. Its membership rose to 300 within its first year as students flocked to sample regular singabouts, lunchtime meetings and a camp at which participants acquainted themselves with Australian aboriginal music. Society alumni included Lewis, Graeme Turner, Chris Kempster (pioneer of the Bush Music Club and The Bushwhackers who completed a Science degree as a mature-age student during the folk years, and was an early enthusiast for emerging U.S. song-poet Bob Dylan) and Chris Shaw.

Involved in the Bush Music Club and Folklore Society milieu from childhood (through her parents Frances and Rod), Chris Shaw learned her first guitar chords from another young schoolgirl, Shayna Bracegirdle, while on holiday with the Bracegirdle family in Brisbane. She later acquired a hand-made instrument from Don Henderson. Like her mother, her repertoire was primarily Anglo-American ballads and international folksongs. (She remembers forgetting the lyrics of the Yiddish love song ‘Margaritkes’ during her one appearance at the Troubadour and being prompted by Frances from the sidelines). Shaw was a popular singer of the “sweet young thing” ilk, appearing at concerts and on TV shows like Dave Allen’s Tonight throughout the boom. She also appeared, along with The Radiation Quartet, Dick Hackett and Graeme Turner on a couple of topical recordings for the NSW Teachers’ Federation. Shaw largely eschewed folksinging after completing her degree, in favour of work in theatre

In 1967 enthusiasts at both the Universities of Sydney and New South Wales co-operated in hosting the first national Intervarsity Folk Festival, billeting participants from all around the country, and convening a series of workshops and concerts over a ten day period. Other significant initiatives included a folk night at Granville in 1965 (advertised as the first such presentation in Sydney’s industrial west. It attracted regulars from the Pigalle and featured Sean & Sonja, Danny Spooner, Jan de Zwaan, The Norfolk Singers, Vicki Reiner and The Lincoln Trio. The recently-formed PACT Co-operative initiated a similar concert at the Chatswood Town Hall in August 1965, as part of the North Side Arts Festival. In October 1967 (notwithstanding reported rifts between the two organisations) The Limejuice Tub and the Sydney Folksong Society combined with the Bush Music Club to stage a three day festival.  Its aim was “to create greater awareness of folkmusic proper in Sydney”.

Most successful was the Port Jackson Folk Festival, i.e. the Fourth National Folk Festival, held over the Australia Day Long weekend in 1970, and a “tremendous box office success”. According to Go-Set [4 Feb 1970]:

From the ages of ten to 50 they came in … beads and singlets, suits and ties, on motorbikes, in old jalopies, by train, by airplane and by foot – 5000 avid folk followers from the far corners of the country.

Advertised as commemorating the bicentenary of Captain James Cook’s discovery of Eastern Australia, the PJFF set an important precedent by channelling some of its profits into promoting further collection of folklore in NSW. Nearly 20 workshops included demonstrations and talks on Instrument making, Whaling songs, the Blues, Bluegrass, Oral Humour, Magic & Superstition, Folk dancing, even puppeteering. Two evening concerts were devoted to Australian and contemporary song and British and American music respectively.

A major (and revitalising) innovation which paralleled the staging of the PJFF was the formation of the NSW Folk Federation, set up with the aim of affiliating all folk-oriented clubs and organisations throughout the state. By December 1970, 12 organisations had joined the Federation and membership stood at 300. Mike Eves served as inaugural chairman with Bernard Bolan treasurer and Warren Fahey in charge of public relations. The Federation promptly made its presence felt in a tangible way by mounting a public symposium, ‘Where Are We Going’, and sponsoring concerts at the Conservatorium of Music and the Science theatre at the University of NSW; presenting American artists Mike & Alice Seeger at the University of Sydney’s Wallace Theatre; and staging two Christmas come-all-ye’s at the Scots Church Assembly Hall (utilising the talents of Declan Affley, Warren Fahey, John Francis, Jamie Carlin, Roger Montgmery and Marian Henderson).

Apart from publications, etc. cited in the text, my main sources have been: