Jean (Jeannie) Lewis was initiated into the Sydney folk scene as a teenager, jamming in the back room of the Royal George with Johnny Earls and harmonica virtuoso Shane Duckham. “I was always interested in music”, she recalls, citing the early impact of the New Theatre and Reedy River. (Lewis’ mother constructed a lagerphone for her to play when her primary school staged a modest revival of the show). Paul Robeson’s voice and Pete Seeger’s renditions of Spanish Civil War Songs were other key influences. (“I was always political”). From the start, she strongly disliked hearing her powerful soprano voice compared to Joan Baez; as far as she was concerned, the vocal styles of the great black bluesmen were infinitely more interesting. She began folksinging in public as a first year Arts student at the University of Sydney in 1962 and ultimately became so involved in music and campus activism that it took her five years to complete her B.A.

Lewis recalls that most of her early performances were at demonstrations. On one such occasion, her guitar (hand-made by Don Henderson) was smashed by police outside the American Embassy. According to a contemporary report, “she leaped to notoriety on Commemoration Day [1964], when she was last seen battering a policeman with a guitar through the bars of a Black Maria”. She sang for a year or so as a member of The Radiation Quartet, an intensely political ensemble which included Mike Leyden, Chris Kempster and Mark Gregory. The quartet appeared along with singers Chris Shaw, Dick Hackett and Graeme Turner on two untitled EPs on the Mutual label, commissioned by the NSW Teachers’ Federation and offering listeners early versions of Leyden songs like ‘A Time to be Singing’, ‘Chessboard of Vietnam’, ‘Sweet Song for Katie’ and ‘Weevils in the Flour’. (The last two songs, settings of poems by Dorothy Hewett, eventually reached a wider public per Gary Shearston). Lewis combined work as the baby of the Carter stable with membership of the York Gospel Singers, a heterogenous instrumental and vocal line-up which united Chris Daw, Alison McCallum, Viv Cargher, Adrian Forward, Bob Montgomery and John Bates. The group’s finest hour was supporting Sonny Terry & Brownie McGhee at the Sydney Town Hall. 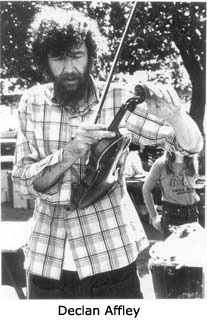 Jeannie Lewis’ repertoire was always wide-ranging, teaming protest material with traditional Australian and Irish ballads and blues (her first love). As the decade progressed, she immersed herself more and more in jazz, cabaret, musical theatre and South American political song. She recalls a five week trip to Chile and singing at the three day ‘Cancion Protesta’ with 52 other international artists (among them Barbara Dane, MacColl & Seeger and Sandra Kerr) as the undoubted highlight of her early career. (Lewis formed the band Gypsy Train in 1970 and recorded three innovative and well-received albums in the 1970s: Free Fall through Featherless Flight, Looking Backwards to Tomorrow and Tears of Steel and the Clowning Calaveras. She continues to perform, more than  four decades after her debut, in 2005)

Born at Cardiff in 1939, of Irish ancestry, Declan Affley received his initial musical training at the Royal Welsh College of Music before joining the British Merchant Navy. He settled in Australia in 1960 and came into contact with the emergent folk scene in Sydney courtesy of the Royal George and other “pubs and low dives”. Acquiring a repertoire of Irish rebel and Australian songs along the way, he eventually “gave up the sea” and became a regular at the Troubadour and other Sydney venues. During a couple of years spent in Melbourne, he appeared frequently at Traynors and the recently-established folk-meets at the Union hotel. He recorded and released two solo albums during the period under review, Rake and Rambling Man on Score in 1968 (which preserves Affley’s immaculate renditions of ‘Carrickfergus’ and ‘Jim Jones’ and his unmatched version of Don Henderson’s title song), and The Day the Pub Burnt Down for Festival in 1971.

Affley also appeared on the compilation Folk Concert on Campus (1965) and on the recordings he made as a member of The Wild Colonial Boys. Credited with having one of the best singing voices ever to grace the Australian folk scene, he has been described as “representative of the great contribution which expatriate Irish, Welsh, English and Scottish singers and musicians have made to folk music in Australia”. (Affley died suddenly – and far too early – in 1985)[Companion to Australian Folklore, p.11-12]. 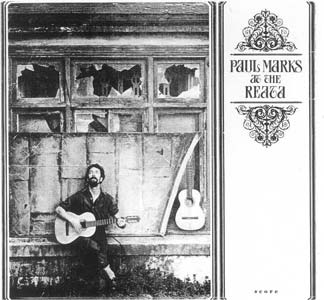 Paul Marks had established himself as a major and influential blues and folk artist in Melbourne before relocating to Sydney in 1963, where he appeared at coffee lounges, all the major concerts and on TV. He was a died-in-the wool traditionalist. Interviewed for the Bulletin during his time in Sydney, he confessed to feeling at odds with the proliferation of protest songs. In his view, folkmusic was “essentially poetic and romantic … I see the song when I am singing it. I’m tremendously influenced by Dylan Thomas … the songs I sing give me a feeling of fantasy … sometimes when I sing I can close my eyes and see the crotchets and quavers in coloured shapes floating about in front of my eyes …”[Bulletin, 14 Nov 1964.] A bracket, taped at the University of Sydney in 1964 and released on the RCA compilation Folk Concert on Campus, underlined his affinity with traditional English material, particularly light and whimsical songs like ‘Widdecombe Fair’ and ‘Sipping Cider through a Straw’. According to Edgar Waters, Marks rendered English traditional songs with “some of the rhythmic freedom, and some of the delicate and musically meaningful melodic decoration and variation that are so often heard from good English country singers. But, alas, all too seldom from singers of the folksong revival”. [Australian, 5 June, 1965]

Margaret Kitamura grew up on a cattle station so remote that her early musical experiences were confined to listening to the family’s antique gramophone and selection of Melba and Gilbert & Sullivan 78s, or picking up occasional songs from the station-hands. She was well into her teens before she first heard the radio or popular music. Kitamura started singing to student audiences at El Toro in Sydney before moving north, where she was a regular at the Brisbane Folk Centre. Her repertoire evolved from Child Ballads (a la Baez) to political and topical songs (by Don Henderson, et al), delivered in a piercing soprano which tended to waver dangerously off-key when she was nervous (viz, her rendering of ‘Blowin’ in the Wind’ on Australian Folk Festival) but made her songs compelling listening when she was in top form. Tasmanian singer Ian Clarke cites hearing Kitamura’s distinctive version of Sydney Carter’s anti-war lullaby ‘The Crow on the Cradle’ as an influence on his own decision to become a performer. Sean Cullip remembers Kitamura with affection as a vibrant, striking and extremely witty woman, given to wearing white make-up and (Dietrich-like) a man’s tuxedo, with a rose at the lapel. According to the late Stan Arthur, she lost her voice in later years, left Australia, and found work with a drive-in church in the United States.

Jim Carter once insisted (rather ingenuously) that making a success of the Troubadour represented the height of his ambition and that only the existence of a power vacuum at the top of the industry impelled him to branch out. (He described his own musical tastes as “eclectic” – so long as it was “done well and the material [was] good”). Early in 1964 he co-leased the Copperfield at Newtown. Described colourfully by the Bulletin as “a kinky, Dickensian roost tucked behind Central Railway”, the Copperfield was somewhat grander in conception than the Troubadour, offering wining and dining “in mature comfort for around 30/- a head while enjoying the music”. A small gallery catered for the “young-in-pocket” who preferred to outlay 6/- “for entertainment only”. In September 1964, Carter bought into a third venue, the Last Straw. “A chi chi barn complete with straw-decorated loft”, on Military Road in conservative Neutral Bay, the Last Straw was (reportedly) a little forbidding in appearance:

Thick straw blinds cover the windows, and only a glimmer of light shows through. Inside, blackened beams, a smithy’s apron hanging at the entrance to the kitchen, old bits and pieces of brass and, pride and delight of the showman side of Jim’s nature, synthetic cobwebs, create a ‘folky’ atmosphere … [W]aitresses [serve] cups of coffee (1/6) … and the listeners, moving up along the rough benches which [flank] long trestle tables, [settle] down to 40 minutes complete absorption.

According to Carter, business at the the three venues (and later the Folk Terrace, as well) – while steady – enabled him to make only a “fairly modest” living, hardly the fortune he was rumoured to be raking in. The clubs attracted big crowds but (he noted) seating capacity at each was small. The artists were paid cash in hand at the end of each week – “enough to pay the rent and exist on”, remembers Gary Shearston. “On occasion, different people used to swan about in the kitchen down at the Troubadour and you could actually get a plate of food if you were dead lucky”.Carter sometimes found himself short of funds to cover the rent and pay the performers, and he was bailed out more than once by a generous business acquaintance who admired what the clubs were doing. Adelaide trio The Wesley Three were among the performers who never received payment for appearing at the Katoomba Jazz Festival, a Carter production which failed completely when the whole area was enveloped by fog. (“Acoustically it was wonderful but you couldn’t see anything but a few lights twinkling through the fog”).  Sean Cullip remembers being annoyed when (on several occasions) Carter underpaid him and then neglected his promise to make up the balance later. Plus – the performers frequently found their nightly fee hard-earned. Carter tended to maximise their services by paying aspiring singer Mike Eves petrol money to shuttle them from one venue to another over the course of an evening – a procedure lnown as “the milk run”. John McMillan (of The Green Hill Singers) claims that “the milk run” was actually fairly standard practice within the Sydney entertainment industry:

Sydney had a reputation. If you wanted to do a strip club night and you went to, say, a dozen strip clubs, you’d see the same acts at each club … In the folk clubs, you’d go from Rushcutters’ Bay to Newtown to Neutral Bay  … and probably end up out at Hornsby! … We were so green it wasn’t funny … We went with the flow.

“We certainly earned our money”, maintains Jeannie Lewis, conceding that the system was all most of the younger artists were used to.  Lewis’ recollections of playing the Carter network are a little hazy 35 years on, although she remembers “hating” the Copperfield because playing there meant having to compete with people having dinner. For young interstate artists, used to the relatively democratic philosophy of Traynors, etc., working for Carter was an eye-opener. Peter Dickie, who once shared the bill in Sydney with Sean & Sonja, remembers being awed by the schedule; clearly this was the “big time”. Lynne St John is less charitable, insisting that, from the point of view of the performer, “Sydney was not up to Melbourne”. Being taxi’d back and forth between the Last Straw and the Troubadour was exhausting and poorly paid. Danny Spooner, who made his debut when Declan Affley invited him up from the floor one night at the Troubadour (circa 1963), and who subsequently played both the Copperfield and the Last Straw, remembers that the rates offered by Carter and other Sydney promoters – rates which the the artists were prepared to accept – infuriated country singer Tex Morton, who wrote ‘Burn another Folksinger’ by way of protest.