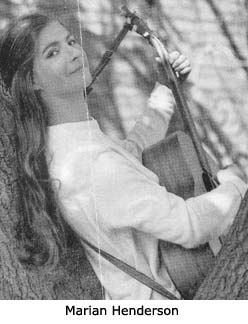 Just as Shearston was the undisputed male star of the Sydney folk scene – and the crown jewel of the Carter collection – one woman singer stood head and shoulders above her peers. From mid 1963, MARIAN HENDERSON was featured at the Troubadour three or four nights a week, performing a mix of  British, American and Australian traditional material. A “cool, tall, pale, frail girl in a pony tail” (according to Charles Higham, [Bulletin, 14 Nov 1964]), Henderson was recruited by Pix Magazine to record a series of EPs for its readers in 1964. During the same period, she attracted national attention by appearing weekly with Don Burrows, George Golla, John Sangster, The Green Hill Singers, etc., on the ABC television series Jazz Meets Folk, taped live at the Astor Motor Inn in Wolloomooloo.

Henderson’s folksinging drew discernibly on her beginnings as a jazz vocalist and her voice and style have been compared more than once to Nina Simone. “She has an indefinable quality that puts her right in world class”, declared Jim Carter. “Even after all this time, I thrill every time Marian sings”. The magazine Music Maker once dubbed her “one of the most complete and compelling artists Australia has produced”:

Visiting American jazzman Eddie Condon once suggested that the Henderson’s greatness lay in her inherent sense of rhythm and blues. On one occasion, when Condon and blues legend Jimmy Rushing stopped by the Troubadour, they were so impressed by Henderson’s performance that they stayed there jamming with her until 5 a.m. the next morning. It is a great pity, therefore, that she was distinctly under-recorded: only one album, a handful of EPs, and a few guest appearances. Two EPs each of Australian and international folksongs for Pix, and a contribution to the RCA album Folk Concert on Campus, preserve her distinctive versions of  perennials like ‘Old Joe Clark’, ‘Peter Clarke’, ‘Kumbaya’, and an intensely moving ‘Black is the Colour’. Henderson can also be heard on the albums The Restless Years and Old Botany Bay. Her most representative recording was the album Cameo (1970), for which she drew on the services of Doug Ashdown and several backing musicians. The excellent album mixes traditional material (‘Bald Mountain’, ‘Convict Maid’) and contemporary songs by Sandy Denny, Ashdown, even Cole Porter. Leonard Cohen’s ‘Stranger Song’ had particular significance for her:

Cameo is one of the best LPs of the era.  Music Maker judged it “impeccable … way above what is usually done in Australia”. Interestingly, the singer herself has little affection for the album. She believes it was fundamentally flawed by the speed with which it was recorded and “should never have been released”. She is much happier with the authoritative rendition of ‘Norfolk Whalers’ which she contributed to Harry Robertson’s album Whale Chasing Man (1971). With superb support from Richard Brooks on harmonica, ‘Norfolk Whalers’ is Marian Henderson’s greatest single recorded performance. (From the vantage of 30-plus years, she recently confessed her satisfaction with “what that lady did” with the song).

“I was an excruciatingly shy kid from a very conservative Melbourne background”, notes Henderson. “Folkmusic opened a door for me. It did a lot to bring me out as a person with some musical talent [who] didn’t know what to do with it”. Enamoured, on the one hand, with Odetta or jazz singers Bessie Smith and Ella Fitzgerald (and, much later, Joni Mitchell), she was also smitten, early on, by the treasure-trove of Australian folksong and the light the songs shed on the collective Australian experience. She refused to concede that most bush ballads were unsuited to women singers:

Henderson augmented work at the Troubadour and elsewhere with frequent TV appearances, English-language radio programs for broadcast overseas, and Arts Council tours of the Pacific and Australia’s far north with the Ray Price Quintet or Don Burrows. The ABC film The Restless Years led to an appearance at the Dublin Festival and a tour of Ireland with Declan Affley, Peter O’Shaughnessy and Clare Dunn. In hindsight, she regards her one-woman tours of remote schools as the most rewarding of all her 1960s experiences. Although the tours were “incredibly exhausting”, involving driving vast distances and relying on her own ingenuity (or luck) when she developed car trouble in places like Lightning Ridge:

I learned that if I didn’t overcome tiredness and didn’t enjoy it, there was no point my being there … I played for aboriginal kids who had never seen a live performer … They didn’t know whether to clap, they would giggle and look at their feet. [To reach them] I had to instantly learn to overcome incredibe shyness and treat the audience like an extended family. 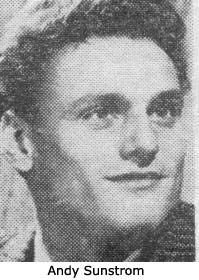 Gary Shearston, Sean & Sonja and Marian Henderson were Jim Carter’s most consistent drawcards. Other performers identified as part of the Carter stable, at one time or another, were Tony Morrison, a gifted flamenco guitarist, Tina Date, Jean Lewis, The Green Hill Singers, Leonard Teale, Declan Affley, guitarist Sebastian Jorgensen, The Liberty Singers, Paul Marks and Margaret Kitamura. Chuck Quinton arrived in Sydney, as if out of nowhere, in mid 1962, with a wealth of English songs like Ewan MacColl’s ‘Dirty Old Town’, which he taught to Gary Shearston. (He teamed up with Alex Hood, as The Rambling Boys, for a time). Leonard Teale, an eminent Sydney actor who had been drawn to bush songs during the 1950s, appeared periodically at the Troubadour reciting yarns and ballads. He went so far as to take singing lessons from Paul Williams, a leading voice teacher, and teamed up with guitar and balalaika maestro ANDY SUNSTROM.

Born and raised in Denmark, Sundstrom drew on a colourful musical apprenticeship, having busked with a friend, two guitars and a balalaika, through Germany, Italy, France and Spain. He travelled out to Australia on board a 38-foot ketch Sarong, and made a number of instrumental recordings for CBS before teaming up with Teale. The pair  recorded two albums of home-grown material, Songs of the Sundowners and Travelling Down the Castlereagh, and even enjoyed a minor chart success (in Tasmania) with the single ‘Bound for Hobart Town’, promoted to tie in with the annual Sydney-Hobart Yacht race. (Sundstrom was a crew-member when the schooner Astor made the Sydney-Hobart run). The Liberty Singers, consisting of guitarists Brian Godden and Bix Bryant and a singing ballet-dancer Irene Whitehead, attempted to tap into the Sean & Sonja market. Resolutely opposed to scruffy folksingers who “hide behind a ‘front’ of beards and general unconformity”, the trio released a single, the sea shanty ‘Lay me Down Dead’, and performed on the soundtrack of a documentary film Road to the West before disbanding in mid 1965. Godden subsequently filled a vacancy in The Green Hill Singers.

THE GREEN HILL SINGERS were three Melbourne boys who enjoyed their “15 minutes of fame” in Sydney during the boom: unashamedly commercial, consciously non-political and unaffected by division among their peers over ethnic vs popular folk. “I make no apologies for the fact we tried to copy The Kingston Trio, with the ivy-league shirts and the whole thing”, remembers group leader John McMillan. “As far as we were concerned, we wanted to just make music … The beauty of  it was working alongside the Marian Hendersons, the Declan Affleys and the Danny Spooners”. McMillan, his brother Alec and schoolfriend John Jenkinson had earlier enjoyed minor success, as The Vedetts, appearing every Sunday night on Dick Cranbourn’s 3UZ Radio show. Early in 1964 the McMillans teamed up with bass-player Chris Bonett and “it just all clicked. Chris was the talent we had to have to form a trio as we wanted it”. As The Green Hill Singers, the boys played on In Melbourne Tonight (IMT) and had the distinction of succeeding The Seekers as resident group at the Treble Clef in South Yarra. Winning Everybody’s Magazine’s ‘Big New Sound of 1964’ talent quest gained the trio a recording contract with HMV and a season supporting Shirley Bassey at the Palais in Melbourne and Chequers in Sydney. A single ‘Big Land’, a catchy celebration of the outback penned by Bonett, received substantial airplay, and the boys threw up their day jobs and moved to Sydney to appear regularly on the ABC TV series Jazz Meets Folk.

Throughout 1965 The Green Hill Singers teamed work in the folk clubs (including the Carter venues) with gigs at RSL and Leagues clubs and appearances on Bobby Limb’s Sound of Music and Dave Allen’s Tonight Show. For a while, they were flown down every Friday to play on Noel Ferrier’s IMT, and at mid-year they recorded an LP for Festival, The Folk Sounds of The Green Hill Singers. John McMillan remembers the trio’s excitement when Dave Guard was called in to provide instrumental support on several cuts: “Am I dreaming here? This is the man I went to see in concert [i.e. with The Kingston Trio]. He’s sitting here in the studio playing 12 string guitar and banjo”. An even bigger thrill was meeting Peter Paul & Mary “at Gary Shearston’s house, and having Paul Stookey walk in, sit down and play guitar with me”. 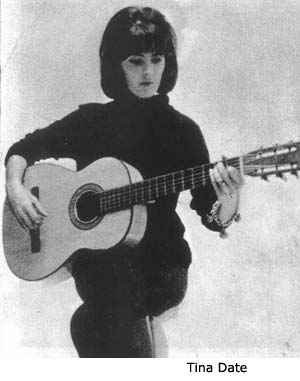 Also born and raised in Melbourne (her mother was noted sculptor Anita Aarons), TINA DATE studied piano at the Melbourne conservatorium, and was an early player on the Victorian folk scene (at Emerald Hill, most notably). She was offered  a paid spot at the Troubadour while on a visit to Sydney in 1963, and she subsequently settled there, combining folksinging with acting and modelling engagements. (Sean Cullip remembers being amazed that her guitar playing was not impeded by her 2 inch fingernails). Date appeared in the stage show ‘By Royal Command’, a verse and song anthology about the British monarchy, in 1965, and in the same year she joined Sean & Sonja and Danny Spooner in an avant-garde presentation ‘Bill meets Bob’, which paid tribute to both William Shakespeare and Bob Dylan. Date reprised her renditions of Elizabethan laments like ‘How Should I My True Love Know’, ‘Tomorrow is St Valentine’s Day’, and ‘It Fell on a Summer Day’, along with more recent compositions like Dylan’s ‘Tomorrow is a Long Time’ and Andy Sundstrom’s setting of Dylan Thomas’ ‘Polly Garter’s Song’, on her debut LP for RCA, A Single Girl. No sooner had it been released than she headed off overseas to visit her mother in Canada and to take on a job with the United Nations in New York. Judy Collins, with whom Date had become friendly during Collins’ time in Australia with the Pan-Pacific Tour, introduced her to the fabled Greenwich Village folk scene. Brother John Sellers invited her up out of the audience one night at Gerde’s Folk City and this led to a two-week stint at the legendary club as well as two weeks standing-in for ailing blues singer Judy Roderick at the Gaslight Cafe. In the process, she became romantically involved with Phil Ochs. Ochs’ biographer Marc Elliot identifies Date as the great love of the gifted but deeply troubled singer-songwriter’s life. On her return to Australia, Date married and retired to the country to raise her children.