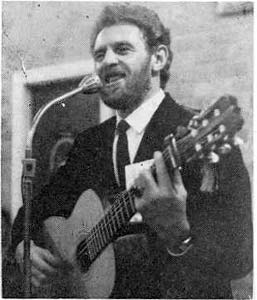 DON HENDERSON (1937 – 1991), who bought a guitar after hearing recordings of blues singers like Blind Lemon Jefferson and Josh White and spent some time playing  with a Melbourne rock’n’roll ensemble called the Thunderbirds, had recently started composing his own songs. (Woody Guthrie’s  ballad ‘Tom Joad’ was a decisive influence). In an interview for the National Library, Henderson recalled the first time he visited “the watering-hole of the fabled Sydney Push”:

I don’t know what I expected; probably cloaked anarchists priming bombs, smocked artists quaffing absinthe and bereted poets reading their latest works. All I saw, though, was a rowdy Saturday afternoon pub crowd … There was a little bright-eyed bloke with thick horn rimmed glasses, playing some pretty wild Spanish guitar in the corner, but only the people in that particular corner were listening to him. He finished the song and passed the guitar to the big bloke sitting next to him. I recognised that bloke. His face was hard to forget.

The “big bloke” in question, who had once worked on the show circuit with Shana the Snake Lady, and who had “one of the best voices” the Hendersons had ever heard, was Brian Mooney.

Welsh-born Declan Affley, who first came to Australia as a serviceman with the merchant navy, has also remembered being exposed to the beginnings of local folksinging activity around 1960/61:

On leave in Sydney I was introduced to an old pub where I met Brian Mooney, Bill Berry, Don Ayrton, and later, Martyn Wyndham-Read, and heard them sing. This was where I first heard the general term “folk music”. The “boom” had not yet arrived and the people there knew only the British and American revival.

Informal Saturday afternoon come-all-ye’s at the Royal George –  were inspirational to Affley, the Hendersons, et al:

The Royal George was equally divided between anarchists, libertarians and communists … all the people were interested in peace. There was also the beginning of early feminism there, and the beginnings of passive resistance, things like that … and the most horrendous fights I’ve ever seen in my life occurred there. [Don Henderson, NLA Interview]

“There were always people with guitars” at Push parties, remembers Gary Shearston. Left-wing awareness of folk themes and folkmusic was “rife” there. According to Don Henderson, people like Mooney:

.. were singing songs that I’d never ever heard, you know, and folk became of importance to me and I began to understand what it meant. I found that I could take my songs and sing them there and they sort of accepted them, being interested in this folk music. I then was invited to the Sydney Bush Music Club which I went to. I didn’t know the difference between what they called Australian songs and what Tex Morton was singing. I still thought that ‘The Rain Tumbles Down in July’, from Slim Dusty, was one of the best songs I’d ever heard. They didn’t think so, but they liked some of the others.

A solid, imposing man, sporting “a burly red beard”, Don Henderson has been described as “a full-time individualist, a craftsman, an all-Australian ‘casual bloke’, a cynic and a romanticist. And, of course, a militant anti-establishment man”. Raised in the stereotypically middle class Melbourne enclaves of Essendon and Moonee Ponds, he trained as a fitter and turner and worked at a range of jobs, most often as a carpenter. He drew on his experience working on the Snowy Mountains hydro-electricity scheme for one of his earliest (and best-known) songs, the up-beat ‘Put a Light in Every Country Window’. A member of the BLF, Henderson worked in Sydney repairing instruments and eventually branched out into making his own guitars. Gary Shearston remembers that his workshop at Woolahra became the focal and meeting point for one sector of the pre-boom Sydney folk scene (Alex Hood subsequently founded his Folk Arts Centre on the same premises), overlapping with parallel sectors like the Push scene and the activities of the Bush Music Club.

With his marriage over, Henderson spent a couple of years travelling in outback NSW and Queensland (turning up in either Sydney or Brisbane every once in a while), going back:

… to where people were actually singing hillbilly songs as they heard them on the radio, and about subjects they accepted, like faithful dogs and lost loves and things like that. I decided that I could get up with them and sing songs about building dams and union struggle. [A Quiet Century, p.vi-vii]

Henderson made Brisbane his home base in the mid 60s and was active in the early folk scene there, both as a soloist and member of the Union Singers. His vocal ability was limited but he soon earned a national reputation for the quality of his songwriting. Citing the influence of the “libertarians” he had mixed with at the Royal George, he consciously wrote about the Australian labour force, his compositions blending “the hillbilly idiom” he had learned as a youngster and the “American finger-picking technique”. Interestingly, The Push itself tended to respond more readily to multi-faceted songs like ‘It’s On’ and the highly satirical ‘Hooker Rex’ than to the more straightforward, anthemic ‘Put a Light in Every Country Window’ (celebrating the Snowy Mountains achievement).

[These] people were different. Sydney artists and intellectuals, university people. They weren’t interested in labouring Australians making a mark on the world. They were the people who didn’t rush to the first World War. They didn’t want to put Australia on the map. All the dopey blokes who put their ages up, left good jobs to go and fight for Australia under its own flag. They’re working class, that’s working class patriotism. [Henderson, NLA Interview]

“Despite his commitment to the Left”, Craig McGregor once wrote:

Don Henderson’s songs rarely degenerate into mere propaganda. Most of them are not even protest songs, in the strict sense: they are, rather, sardonic commentaries on contemporary Australian life … He can be as zany as Dylan, as straightforward as Pete Seeger. His songs depend more on cumulative effect than vivid imagery; they are plain song, the plain man’s song. The characteristic note is one of understatement, irony, rather than declamation … [McGregor, People Pop and Politics, p.143]

Marian Henderson (she retained the surname following the couple’s divorce) indulged her own growing interest in traditional music by taking up the banjo and, subsequently, the guitar, and forming a pioneering folk trio with jazz guitarist/ commercial artist Chris Daw and ex-Rambleer Alex Hood. Charles Higham has claimed that folk song in Sydney got its first “big boost” – courtesy of the trio Daw, Hood & Henderson and the songwriting talents of Don Henderson – during the White Collar festival in 1961. The trio performed at open-air meetings during the Margins and Leave campaign and released two EPs, Oh Pay Me which included an Equal pay song and the Calypso-derived ‘Hooker Rex’, and one for the ALP in support of left-wing Sydney politician Tom Morey  (‘We’re Going to Vote Tom Morey’ was based on ‘Tom Dooley’). They were featured on a regular folksong program sponsored by Sydney City Council on Radio 2KY. Before going their separate ways in 1962, the trio co-founded the Association of Sydney Folksingers.

Henderson, who had been juggling the trio and vocal work with a number of jazz and dance bands around Sydney, turned increasingly to folkmusic, often playing at charity functions or ladies’ lunches in Vaucluse and Double Bay. At this point (she recalls):

Folksingers were an unknown quantity with a slightly shabby aura because people didn’t understand [them] – something to be recoiled from, then stomped on, then [perhaps] examined more closely. 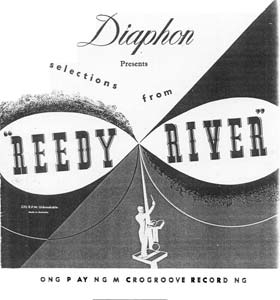 Henderson would emerge as the Sydney scene’s leading lady during the boom. Hood, who fell in love with traditional bush songs when he saw the first Sydney production of Reedy River (and managed to get himself hired as a cast-member of the show), was a widely-travelled and experienced musician. A member of The Bushwackers, he went on to form his own bush band The Rambleers (which included Chris Kempster, Harry Kay and, at different times, Mark McManus, Laurie Morris, Dennis Kevans and Barbara Lisyak), and earned plaudits from Harry Belafonte and Belafonte’s musical director Milton Okun as a solo performer of Australian material. In 1962 he teamed up with British singer Chuck Quinton, as The Rambling Boys, and they spent several months with a down-at-heels circus troupe before taking off on their own, “singing for their supper” throughout outback NSW. Hood and his wife, Gabrielle, subsequently established the Folk Arts Centre at 90 Queen Street, Woolahra. Modelled after Israel Young’s Folklore Centre in Greenwich Village, the F.A.C. provided educational and leisure facilities and a library, but failed to survive its first year. Hood’s first LP, The First Hundred Years, was released by MFP, in conjunction with a pocket songbook, in 1964.

The trio Daw, Hood and [Marian] Henderson made one of its last appearances, performing a bracket of union songs and sharing the stage with speakers Edgar Waters, Russel Ward, Maryjean Officer and Peter Hamilton, and artists Beth Schurr, Chris Kempster, Barbara Lisyak, Alan Scott and legendary bush balladeer Duke Tritton, at an “Australian Folkmusic” weekend school organised by the Workers’ Educational Association in July 1962. Tritton, the authentic “darling” of the Sydney Bush Music Club, delighted traditionalists with his own songs, ‘Shearing in a Bar’ and ‘The Goose-necked Spurs’. Reviewing the weekend, the Gumsucker’s Gazette highlighted also several young newcomers, “all with a lot to learn but each markedly different in style and that style their own”: Jean Lewis (misspelled “Louis”) and G. Chearston (sic), in particular,  were both on the brink of bigger things, as a Sydney folk venue network emerged.

The “coffee shop wave” of the contemporary Australian folk song movement “lapped our shores first in Melbourne and it was not until a year or two later that it washed over Sydney”, notes Edgar Waters. [Music Maker, Sept 1962; Australian, 17 Oct 1964] According to Don Henderson:

… The first coffee lounge where anyone was actually paid to sing was the Marmosa [Mimosa?]. It was in the block between Sussex and Clarence, in King Street. It was run by an old Dutch lady who’d heard singing in cafes in Europe and she engaged Marian [Henderson] as a singer there. The people used to go there after the Royal George finished, and that would be in 1961. [Henderson, NLA Interview]