[Part 1 of this paper, subtitled ‘Beginnings’, was originally published in Trad and Now, Issues 5 ,6 ,7 & 9. It examined the bohemian and jazz club antecedents of the revival in Melbourne, and looked at organised folksinging activity at clubs like the Reata, Treble Clef, Hernando’s and the Jolly Roger; pioneer festivals; the Emerald Hill concerts; and the influence of singers Paul Marks, Glen Tomasetti, Martyn Wyndham-Read, Brian Mooney, Peter Laycock, the Lumsden Family, Ken White, Trevor Lucas and Garry Kinnane.]

“You’re an old folkie. You might be interested in this”, a work colleague observed, passing me a clipping from the Melbourne Age. “This” was an advertisement for a joint appearance at the East Brunswick Hotel (March 1999) of four of the best-known folksingers of the 1960s: Martyn Wyndham-Read, David Lumsden, Brian Mooney and Danny Spooner. The occasion was the launch on Compact Disc of the landmark album Moreton Bay, originally released on the Score label in 1963.

The evening in question proved to be much more than just the reissue of a historic LP. Investing their renditions of well-worn old songs with all the skill and musicianship they had acquired over four decades of performing, the artists played to an audience largely drawn from old regulars at the legendary jazz and folk venue Traynors. For everyone involved, it was a joyous and memorable get-together. Reference was made to the 60s folk scene throughout the evening; David Lumsden paid affectionate tribute to pioneer singer Glen Tomasetti, and Andrew Pattison raised a toast to the memory of three other artists closely associated with Traynors, Trevor Lucas, Graham Squance and John Graham. Fittingly the evening closed with the perennial ‘Wild Mountain Thyme’, sung en masse.

An unabashed exercise in nostalgia, and a tribute to the endurance and survival of music and musician alike, the Moreton Bay concert served as catalyst for my research over the past five years into the history of the urban folkmusic revival as it manifested itself in Australia in the 1960s. The central focus of this extraordinarily rewarding project has been the rise and decline of the stereotyped folk coffee houses – clubs and cafes, romantically Spartan and tantalisingly dingy, where youthful audiences gathered earnestly to absorb and reflect on the “music of the people”. Traynors was “the daddy of them all”. While by no means the first, or even the longest-lasting, it was undoubtedly the most influential and best-loved of the dozens of folk coffee houses that proliferated throughout the country during the so-called folk 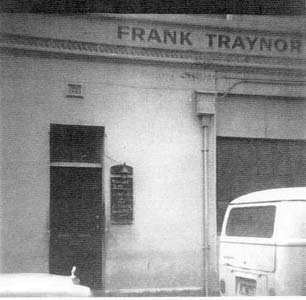 boom. Invariably mention of Traynors elicits affectionate smiles or a hint of nostalgic tearfulness from old patrons and performers alike. For many a Melbourne baby-boomer, Traynors embodies the ‘60s folk scene.

There has been a surprising amount of disagreement over the venue’s starting-date, ranging from late 1961 [Pattison & Mulholland, Graham Simpson] to February 1964 [Davey & Seal]. The magazine Music Maker is more precise; in his ‘Melbourne Roundup’ column for October 1963, Jack Varney noted that Frank Traynor had recently taken over premises at the corner of Exhibition and Little Lonsdale Streets with the dual object of presenting folksinging and staging jazz parties to pay the rent on the building. (Varney failed to observe that the building had recently seen service as a brothel). Veterans of the Melbourne music scene believe that the formal presentation of jazz and folk at 287 Exhibition Street grew out of the 1963 Emerald Hill concerts (See Part 1).

As founder of the Melbourne Jazz Club and leader of the enormously popular JazzPreachers, Frank Traynor (1927 – 1985) has been credited with initiating the Australian Jazz revival of the late 1950s-60 and with revolutionising its presentation. “Frank promoted jazz with a fervour verging on the religious”, notes Mary Traynor. “It didn’t matter where he played, or what occasion, as long as people heard jazz. He called it ‘spreading the word’”. For several years (1958-63) the Jazz Preachers held a summer residency at the Wild Colonial in Lorne, and it was there that he first connected with the folk revival through friendships with Glen Tomasetti, Brian Mooney and Martyn Wyndham-Read. Years later Traynor recalled: “There was a natural affinity between folk and traditional jazz musicians at the time. They had mutual respect for one another, particularly because they were both taking their music from folk roots, they were both a bit underground, they were both totally sincere in what they were trying to do with their music and had a great personal belief in it; there being a message of truth in the music”.

Frank Traynor’s Jazz and Folk Club, which quickly became known simply as Traynors, grew out of its founder’s dissatisfaction at playing the standard round of RSL dances, wedding receptions or rowdy parties, and his awareness that similar dissatisfaction existed within a folk circuit where “folkies were auxiliary to the coffee machine”. Reconciling business and artistic fulfillment was an ongoing dilemma confronting folk coffee lounge proprietors. Singers who attracted cult followings were anathema to businessmen who wanted a quick and steady turnover of paying customers (not devoted observers, or penniless friends of the artist, who sat all night over one or two cups of coffee). Tom Lazar, at the Reata, had grown increasingly restive as diners complained about having to listen to folksingers when all they wanted was a convivial evening out with friends. Nor, of course, was such an environment likely to bring out the best in the performer. Garry Kinnane was once tossed a pound note with a curt request to “take your banjo up the other end of the restaurant”. Alarmed at declining patronage, Lazar had cut back the entertainment in Malvern and 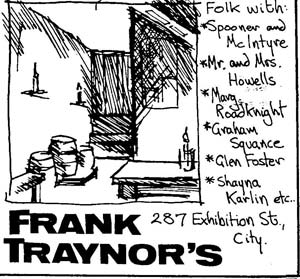 established the Little Reata in the city, hoping to redirect most of the folk trade there. As it was, the new venue encountered similar problems; by now Lazar had lost interest. (The two cafes had ceased to operate as folk venues by the end of 1964).

What Traynor visualised, therefore, was a music club first-and-foremost, where folk and jazz musicians alike could play “the music they wanted to play” to appreciative and attentive audiences, and be decently remunerated. The timing was opportune. His bank account was comfortably “in the black” thanks to a day job (with the National Bank) and a particularly hectic season with the Jazz Preachers. Glen Tomasetti, meanwhile, was looking for somewhere to transfer her Sunday Afternoon Folksingers & Minstrels Club with the end of the Emerald Hill tenancy looming. Traynor earmarked 500 pounds to get the club started. An idealistic musician first and foremost, with little time for the diplomatic niceties required in a “people industry” (and a real skill for delegating responsibility), he promptly recruited two acquaintances from the jazz world to take on the day-to-day management. (Jim Beal and Don Carless were already known to each other from their days with the circus. Carless had previously come into contact with folkmusic via Brian Mooney at the Arab Café. Visiting the Troubadour, the Sydney folk venue established by businessman Jim Carter, had reinforced his interest).