In a scathing dissection of the Australian folk revival at its peak, Sydney journalist Charles Higham firmly shifted blame for the phenomenon on to the southern metropolis. “It all began in Melbourne”, he informed readers of the Bulletin [14 Nov 1964], “… in dim clubs, emerging from the always fierce interest there in jazz and blues”. Melbourne’s primacy in fostering the folk boom has since become accepted wisdom, although it should be stressed that the coffee lounge era did not happen overnight. Crucial precedents, many of them NSW-based, included the fieldwork of Meredith, Manifold, Edwards, et al; the formation of scholarly Folklore Societies and Bush Music Clubs in the wake of the success of Reedy River; the establishment of Wattle Records.

While the folksinger per se was a scarce and unusual commodity before the ‘60s, a handful of hardy individuals had been “carrying the torch” for years – people like Thea Bates, who toured remote Queensland schools with a folksong program during World War II; Sydneysiders Jeff Way and Barbara Lysiak (who introduced mainstream audiences to American hootenanny songs); Beth Schurr (who pioneered the performance of folksongs on live-to-air TV); Johnny Earls; Bob Elliott; Frances Shaw; even Shirley Abicair, a typist who started out performing French and Appalachian material to her own zither accompaniment before moving on to fame and fortune in London. Alex Hood and Chris Kempster seceded from The Bushwhackers over the issue of interpretation and wentb on to form The Rambleers. The Lincoln 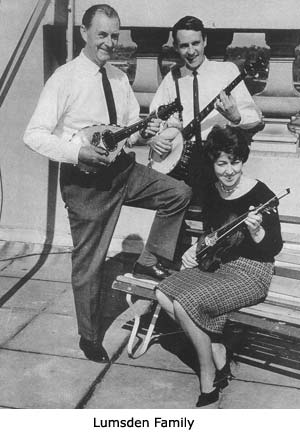 Coffee Lounge played host to the inner-city “arty set” and even produced its own roneo’d songbook for informal gatherings. Elsewhere in late 1950s Sydney, the “folk-oriented”bmight be found at The Tavern near Edgecliff Station or on Saturday afternoons in the back bar of that bohemian Mecca, the Royal George Hotel.

In Melbourne pre-revival folksingers like Joan & Miles Maxwell, the Lumsden Family and Glen Tomasetti also found their main audiences within the urban arts and intellectual sub-community where Spanish Civil War songs, Paul Robeson, The Weavers, Seeger and Guthrie were the music-of-choice: – the Bread and Cheese Club, Ola Cohn’s studio in East Melbourne, Clifton Pugh’s property at Hurstbridge, the Lawson Society, Tattersalls Hotel, etc. Broadcaster Denis Gibbons was performing bush ballads to listeners of Radio 3LO. Meanwhile the Skiffle craze, Harry Belafonte’s West Indian repertoire and the enormous success of the hit record ‘Tom Dooley’ in 1958, had inevitably inspired a rash of quasi-Calypso ensembles and Kingston Trio imitators throughout the country. (In Brisbane, for instance, Stan Arthur fronted a calypso group The Banana Benders before moving on to form The Wayfarers. In Hobart graphic artist Alan Tweedie entertained diners at the Dutch Inn with ‘Scarlet Ribbons’ and Weavers material).

Still, if a single event can be said to have heralded the advent of a popular folkmusic scene in Australia, it was the decision of restaurateur Tom Lazar to introduce live music at his cafe, the Reata, in High Street, Malvern. A post-war European migrant, Lazar toyed briefly with the notion of presenting a German folk-dance floorshow, complete with lederhosen, feathered caps and beer steins. Fortunately, his wife Veronica was more farsighted; she suggested instead that the restaurant emulate American trends and engage a self-accompanied folksinger to entertain the patrons. “It’s the coming thing”, she predicted. Accordingly, the Reata was decked out in Greenwich Village chic: fishnets on the celing, candles in VAT 69 bottles, red and white gingham tablecloths. A heavy wooden door, separating the entry from the street, reinforced the cafe’s sense of “interiority’. The folksinger in question was a specialist in traditional blues, already well-known on the Melbourne jazz circuit.

Jazz – in particular, traditional jazz – whether at smoky clubs or at dances in suburban R.S.L., scout and town halls, attracted an enormous following in the Melbourne of the late 1950s and early ’60s. Teenagers and young adults – in their thousands – found an alternative to the naivete of mainstream pop music at venues like Basin Street (in Brighton), Katherina’s Cabaret (St Kilda), the Blue Beat (North Balwyn), the Powerhouse (at Albert Park Lake), the Black and Blue (at the Balwyn RSL) or the Downbeat Club (above Bob Clemens’ city music store). “Town halls were literally packed to the rafters every weekend”, singer Judith Durham has recalled. Uniformed in tight corduroys, sloppy joes, desert boots and duffle coats, patrons would stomp and cake-walk to the hot Dixieland, gospel and blues served up by the likes of Frank Traynor’s Jazz Preachers, the Yarra Yarra Jazz Band, the Melbourne New Orleans Jazz Band, the University Jazz Band or the John Hawes Jazz Band. Once the shows were over (Durham informed her biographer), “… everybody went off to a coffee lounge. You maybe had a beatnik boyfriend and went off for coffee and a toasted cheese sandwich after the dance. It was the thing to do” [Graham Simpson, Colours of My Life, p.28-34]. Given the average age of the largely-student jazz-buff population, mostly dependent on train and tram timetables or on obliging parents for transport to and from dances, there was sometimes a more mundane motivation to spend time at coffee-lounges: “When the venues closed around 11.30 p.m. the only safe option, bearing in mind the hostile reaction of ‘rockers’ to duffle coats and desert boots, was to go to one of the new music-oriented coffee lounges that were opening up around town, like the Reata …”[Andrew Pattison & Dave Mulholland, ‘Tradition and Change’ in Australian Music Directory 1981, p.95].

It was inevitable that youthful jazz fans found themselves exposed increasingly to folkmusic as singing took off in more and more coffee lounges. Nor can it be denied that the popularity of folksinging at the height of the boom impacted, to some extent, on urban jazz scenes – particularly in Hobart, Adelaide and Perth, where audiences for alternative music were limited. Yet there was an essential compatibility between Australian jazz and folk in the ‘60s. As jazz historian Bruce Johnson has noted, the two forms of music “appealed particularly to the young products of the ‘baby boom’ for whom the university system suddenly expanded through the 1950s”. Associated with both comfortable middle-class intellectualism and youthful intellectual dissent (stereotypical “angry young men”, beatniks and Paris Left Bank types), jazz – in both its traditional and progressive manifestations (the latter frequently spawned in association with poetry, painting and other non-musical modes of artistic expression) – was deemed an infinitely more valid means of musical recreation than rock’n’roll. A similar aura of non-conformity and intellectual intensity surrounded folkmusic. For more cerebral members of the jazz fraternity, there was an historic edge to the discovery of folksong. Intent on tracing the roots and origins of the musical form they loved, they found themselves led to the riches of American tradition (starting with gospel and blues) and from there, even further back, to the folkmusic of the British Isles. Journalist Craig McGregor [People, Politics and Pop, p.150-151] observed at the time: “recognising in it the qualities which are absent in modern music … jazz has provided the thoroughfare” for many a folk convert. 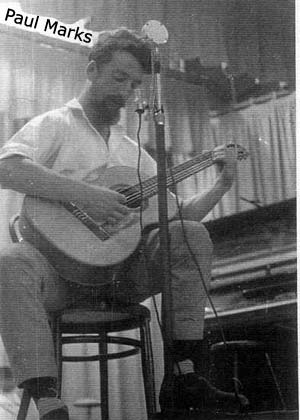 Born in London in 1932, Paul Marks worked as a Physical Training instructor with the RAF before electing to settle in Australia. In a letter to the author, he recalled: “I had emigrated to Australia in 1956 and soon met Frank Traynor, Bob Barnard and the rest of that talented lot, and started singing with Frank and Bob down at Mentone life-saving club”. Even at that early date, Marks’ musical boundaries were flexible. He formed a shortlived skiffle group and was appearing with the group at the Purple Heaven in St Kilda when he was promptly recruited as vocalist by another act on the bill, the Melbourne New Orleans Jazz Band.

Led by clarinet-player Nick Polites, the MNOJB claimed to be the first Australian band to play in the English New Orleans style. It drew almost entirely on the black American gospel, spiritual and blues tradition associated with legendary Louisiana jazz greats like Bunk Johnson and George Lewis, and attracted a substantial local following. Marks combined vocal duties with the band as a whole and singing/playing with the MNOJB’s rhythm section – banjoist Willie Watt, drummer Graham Bennett and bassist Mookie Herman – as a subsidiary ensemble calling itself ‘The Paul Marks Folksinging Group’. (“This must have been ’57 or ’58”, notes Marks). Nick Polites recalls that the audience threw pennies when Marks first tried out his Folksinging group at the Esquire in Glen Iris; within a couple of weeks, however, the young patrons were “eating out of his hand” and “it became the talk around town”.

In the summer of 1958/9, Marks took advantage of the MNOJB’s holiday engagement at the seaside resort of Lorne, 70 miles west of Melbourne, to first perform brackets of folksongs and blues at a coffee lounge (sometimes solo, sometimes with his backing trio). The Arab Cafe was the brainchild of three young brothers, Graham, Alistair and Robin Smith. Established in 1956 to take advantage of an influx of overseas visitors to the 1956 Olympics, the Arab was a long narrow eatery, an avant-garde structure of bluestone, glass and canvas which modelled itself on European coffee bars. Its espresso machine was only the third of its kind in Victoria. Bikini-clad waitresses served cappucino, milk-shakes, toasted sandwiches, pasta and a range of colourfully-titled desserts (the “Porgy and Bess” and “Harem Girl” sundaes among them) to Toorak surfies or to holidaying students who sprawled on cushions discussing poetry and Plato, debating world issues or listening to music (canned or live). Kristen Lofven (now Williamson), who worked there as a summer vacation waitress, recalls that the cafe “hit a fashion nerve”, staying open around the clock from Christmas to Easter, and serving 2000 people a day:

It was the days before big jets, when anything other than Fletcher Jones trousers, Smokey Dawson and meat pies was considered exotic. Here was a place that offered a smattering of styles, Italian cafe society mixed with the American beat scene as well as a novel bit of Australiana – perving on near naked and unattainable beachgirls [National Times, 15 Feb 1981]