THE EARLY YEARS OF THE FOLK REVIVAL IN BRISBANE

[A slightly abridged version of this article was previously published in The Folk Rag, July – Sept 2004, and reprinted in Cornstalk Gazette, Sept – Nov 2004]

I was saddened to read, in a recent issue of the magazine Trad and Now, of the passing of one of the true pioneers of the Australian folk revival, collector, singer and lifelong folklore enthusiast Stan Arthur (1925 – 2004).

Although geography prevented our meeting face-to-face, I had the privilege and pleasure of interviewing Stan by phone (over several evenings) a few years before his death. A born raconteur, he delighted me with his frank, albeit affectionate, recollections of the early Brisbane folk scene and (subsequently) with several generous packages of rare recorded tapes and clippings culled from his extensive personal archive. (At that stage he was still attempting to rebuild a legendary folklore collection devastated by the 1974 floods). The following article, a part of my ongoing research into the history of the folk revival in 1960s Australia, draws heavily on my conversations with Stan, as well on notes of interviews with Anne Infante and Dave de Hugard, information from Mark Gregory, and Bill Scott’s interview for the National Library. [Bill Scott, Recorded Interview with Alan Scott & Kevin Baker, NLA Folklore Collection ORAL TRC 2581]

The urban folk revival, as it manifested itself in Brisbane, was able to call on a sturdy tradition of folksong collection and preservation. An enterprising performer Thea Rowe had toured remote schools with a program of folksongs courtesy of an Education Department grant in the mid 1940s. A decade later, the Wynnum North home of the great folklorist John Manifold became a focal point for leftist intellectual and musical activity in the state. Manifold convened regular singabouts, fronted his own ensemble The Bandicoots, and collaborated with Victorian Ron Edwards on the compilation Bandicoot Ballads. (Edwards too became a Queenslander, settling at Cairns in 1960). Manifold’s fieldwork culminated in the Queensland Centenary Songster (1959) and, with assistance from Bill Scott, he compiled and edited the widely-disseminated Penguin Australian Songbook (1964). Meanwhile, just as response to Reedy River (1954-5) had led to the formation of scholarly folklore societies and bush music clubs in Victoria and NSW, so the Brisbane production of Dick Diamond’s play produced the Moreton Bay Bushwhackers Band (MBBB), members of which included Stan Arthur and, later, Bill Scott. (Novocastrian Stan played ‘Irish’ in Reedy River). Together with other enthusiasts, the MBBB formed the Brisbane Bush Music Club (which eventually revamped itself into the Queensland Folklore Society). Bill Scott recalls that the Club inaugurated its own newsletter and songsheet, the Bush Music Telegraph and, in the early 1960s, convened monthly singabouts (Sydney-style) at the Oddfellows Hall in Charlotte Street. A couple of buckets of burgundy punch, circulated over the course of the evening, generally spiced up the proceedings. [Scott Interview NLA]

Other bush clubs emerged in regional Queensland and additional fieldwork was performed by Bob Michell, Bill Scott and Stan Arthur. A credit manager, once described as looking “for all the world like a well-fed leprechaun”, Stan reportedly found his first taste of collecting intoxicating:

I’ll never forget it … We took a train to Bundaberg, hitched a ride to Goodwood and walked to Childers. I walked into Claude and Don Hamilton’s Bellevue Hotel with my guitar over my shoulder and it was on. What was meant to be a five minute stop just went on and on. We finished up staying 14 days. They loved music and we finished up even building a lagerphone and a bush bass. We had a ball. [Gold Coast Bulletin, 23 June 1981]

Scott and Arthur collaborated on the first commercial recording of Queensland folklore, Billygoat Overland, for the fledgling Wattle company in 1958. Wattle celebrated the state’s centenary with Folk Songs from Queensland, teaming the Moreton Bay Bushwhackers and the Bandicoots, the following year. 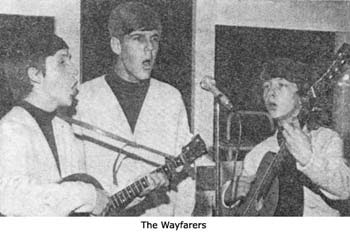 When The Kingston Trio played Brisbane’s Festival Hall as part of its 1961 tour, Stan Arthur sent a tape of Australian songs backstage to Dave Guard, the trio’s leader. Guard was touched by the gesture and returned the favour with the gift of a 3-year subscription to the American magazine Sing Out and a tape of The Weavers. For Stan, who had formed his own Calypso ensemble, The Banana-Benders, when Harry Belafonte’s popularity was at its height, the tape served as the entree into “a whole new world of songs”, and inspired him immediately to form his own trio. The initial recruits were Bob Stewart and Gary Tooth; subsequently the trio expanded into a quartet with the addition of Alistair Fraser, who brought with him a knowledge of Canadian folklore gained while working for a construction firm in Canada, and the foursome adopted the name The Wayfarers. The Wayfarers was undoubtedly Queensland’s best-known folksinging ensemble of the period. It was also an extraordinarily long-lived one. (Having numbered some three dozen performers in its ranks, the one constant being leader Arthur, the group finally disbanded in 1999).

The Wayfarers’ first professional job was at the Hotel Brisbane, performing unamplified to the standard “boozy crowd”. The ordeal proved worthwhile, however, as it led to an invitation to try out at the Primitif, a coffee lounge-cum-jazz club in Adelaide Street. The Wayfarers’ international repertoire, which included a number of Israeli songs, went over particularly well with a core group of Jewish students who were habitues of the club. A resident jazz combo was promptly sacked and the quartet engaged. Accordingly, the Primitif had the distinction of becoming Brisbane’s first folk coffee lounge, and The Wayfarers its first resident folk act (for nine months from late 1962). The club operated pretty much in isolation for the next year or so, although (according to Don Henderson, then travelling and working in the outback), there were rumours that another Brisbane cafe was offering audiences folksinging on Saturday evenings early in 1963. Failing to find the cafe in question open when he hitch-hiked into town one weekend, Henderson was directed to a nearby pub:

It seemed the cafe owner … had decided not to open that night and the singers had all gone to the hotel … After the usual calls of “Give us a song, Elvis” carrying a guitar into a hotel bar brings, I moved into the lounge. Here singing to an audience that wouldn’t have looked up from their beer if the whole Folkways stable had ridden in on a one-wheel cycle were Bill Berry, Don Lee and a mouth-organ player and songwriter, Bill Jones. We sat there singing till the requests for ‘You Are My Sunshine’ became more frequent than the beers that accompanied them; and that was folkmusic in Brisbane as far as singing in public was concerned. [Music Maker, June 1964]

As editor of the Folk Rag, the late June Nichols noted (on first publication of this article in 2004), that “The Wayfarers disbanded as a registered partnership in 1999, but the group still thrives even after Stan’s death, as the resident singing group at the Kookaburra Folk Club, each Wednesday night at the Kookaburra Café, Paddington. The three dozen members stated above would be a very conservative number”.