Peter O’Shaughnessy presents a brilliant 35-minute portrayal of Australia’s greatest convict poet, Frank MacNamara. Peter passed away a few year’s back and was keen I include this on the site. It has occasional slight hiss noise but very enjoyable nonetheless. Peter O’Shaughnessy (b.1923), actor and producer, produced many Australian plays and acted the major Shakespearian tragic roles both in Australia and overseas. He was noted for his interpretation of Samuel Beckett’s plays and one-act performances of Diary of a Madman, adapted from Gogol. Peter, a longtime friend of Warren Fahey, delighted in revealing the characters of Australia’s convict history, but none more so than his portrayals of Frank the Poet MacNamara.

In 1968 he collaborated with Graeme Inson and Russel Ward on a lavishly illustrated anthology, The Restless Years, based on his award-winning television program of the same name.

In 1977 Warren Fahey cast him alongside Declan Affley in a 16 part ABC radio series ‘The Australian Legend’. The entire series can be heard on this site under ‘podcasts and radio programs’.

Portrait from the National Galley of Australian Collection. Part of the Melbourne intellectual avant-garde of the 1940s, Howard Matthews was a brilliant student. He is said to have introduced Sidney Nolan to the poetry of Rimbaud and Verlaine 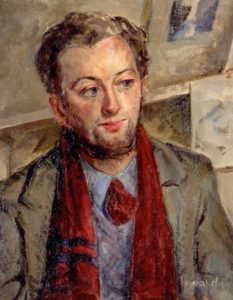