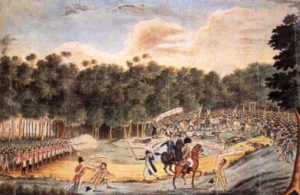 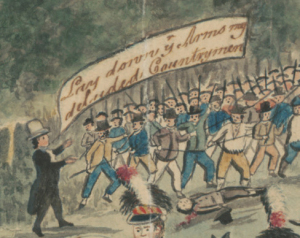 The first great insurrection of convicts commenced at Castle Hill, and extended to the Hawkesbury. This outbreak was shown to have been in agitation for a month previous. Martial law was proclaimed. The insurgents had in their possession 136 muskets, 14 pistols, and a great number of swords, bayonets fixed on poles, and pitch-forks. Ten ringleaders were taken in arms on March 4 and 5th, 1804. [They were tried and condemned: three were executed at Parramatta on the 8th, three at Castle Hill on the 9th, two at Sydney on the 10th, and two were respited.

Source: In 1879 J. A. Heaton published a ‘Book of Dates’ relating to the early years of the Colony of New South Wales. It is an extraordinary work and provides facts, figures and observations on a wide range of ‘colonial doings’. All spelling, including place names, has been left as per the original documents.

I arrived in the colony fifty-five years since; it was Governor Phillip’s time, and I was fourteen years old; there were only eight houses in the colony then. I was seven years in bondage, then started working for a living wherever I could get it. There was plenty of hardship then: I have often taken grass, pounded it and made soup from a native dog. I would eat anything then. For seventeen-weeks I only had 5 ounces of flour a day. We never got a full ration except when the ship was in harbour. The motto was ‘Kill them, or work them, their provision will be in store.’ Many a time I have been yoked like a bullock with 20 or 30 others to drag along timber. About 800 died in six weeks at a place called Toongabbie, or Constitution Hill.

I knew a man so weak, he was thrown into the grave, when he said, ‘Don’t cover me up, I’m not dead; for God’s sake don’t cover me up!’ The overseer answered, ‘Damn your eyes, you’ll die tonight, and we shall have the trouble to come back again.’ The man recovered, his name is James Glasshouse, and he is now alive at Richmond.

“At half past eleven o’clock on Sunday night, March, 1804, an, express was received by His Excellency, from Captain ABBOTT, Commanding Officer at Parramatta, with the intelligence that the Prisoners at Public Labour at Castle Hill, and the Settlers’ men, were in a state of Insurrection, and had committed many daring outrages.”

In these words the Sydney Gazette of March n, 1804, opened its account of the stirring events known as the Battle of Vinegar Hill. It was the most powerful of the convict rebel-lions. Its leaders were mainly Irish and their followers num-bered several hundreds.

On the 4th of March, 1804, when returning home through Parramatta, I saw several men standing about in little gangs, and, recollecting what had been told me, I suspected something was going on, but said nothing. I met Timothy Holster, taskmaster of the Government men. He and I seldom met but we drank together, and on this occasion we called for a decanter of rum. He was an Englishman, and when we were drinking he said to me, “Mr.  Holt, take my advice, and do not be out late to-night, as I should be sorry to hear of anything against you.”

I asked what he meant, and he told me that the Irishmen were to break out that night, and that the Government were in possession of their plans. I immediately proceeded to Mr. Cox with my wife and child,  and told him what I had heard. He asked me my opinion of the business. I answered that I knew nothing more than what I hadheard and told him; but that I should be ready to defend his house and keep off any assailants. He gave Sergeant King, who was his clerk, orders to prepare some cartridges, and we were all upon the alert. … In the morning Mr. Cox rode over to inquire the cause of the proceedings of the night. He returned, and gave the follow-ing account: About goo men had assembled on Castle Hill, and chosen one Cunningham, as their leader. Captain George Johnston went towards them and demanded what they wanted. They replied, “Death or liberty.” A soldier named Laycock, who stood six feet six inches, a quartermaster in the corps, came up, and with one blow killed Cunningham on the spot. On this the whole mob took to their heels, and many were shot.

Ten of the leaders were hung, and three more hung the same evening at Parramatta. A party of 40 soldiers and some of the loyal settlers arrested some of the unfortunate wretches who tried to escape by flight, and brought them back before a court-martial.

It was arranged that lots should be drawn from a hat, and that every third man whose name was drawn should be hanged. The arrival of the Governor put an end to this extraordinary proceedings.

The alarm began at Castle Hill about 8 o’clock on Sunday night where there are upwards of 200 Irish Prisoners (sent here for Seditious Practices in Ireland), by setting a House on fire and ringing the Bell, when Cunningham appeared as the avowed leader, vociferating the cries of “DEATH OR LIBERTY!” and assuring those who were joining him (and others who say they were compelled), that Sydney and Parramatta were in their possession, that they had nothing to do but obey his orders and plunder the Settlers of their Arms (for which purpose parties were sent off in different directions), and after being united, to march to Hawkesbury, where they were assured of their force being augmented to 1,100 men, with which they were to return to Castle Hill on Tuesday morning to breakfast, march to Parramatta, for the possession of which two well known disaffected persons were to be answerable. After planting the Tree of Liberty at Government House, they were to proceed to Sydney, the possession of which was also supposed secured by three disaffected characters, and then embark  on board the ships, which would also be ready to receive them.
|
Sydney Gazette, March 11, 1804.

In reading the above, Patrick Henry’s famous utterance comes to mind:

“Is life so dear or peace so sweet as to be purchased at the price of chains and slavery? Forbid it. Almighty God. I know not what course others may take, but as for me, give me liberty, or give me death”