Sally Sloane sings ‘The Wild Boy’, a song about the prodigal son returning – from transportation. Recorded by Warren Fahey, Lithgow, 1987.

There were many broadside ballads written about transportation. The following short essay on Broadsides and Ballads was published in the Companion to Australian Music (Currency Press):

In the early 19th century sellers of broadside ballads were a common sight in the streets of Great Britain and Ireland. A broadside, or broadsheet, was an uncut, unfolded sheet of paper. A sheet would be printed on one side – which suited it to pasting on a wall – with a proclamation, an advertise- ment, or a song or two and appropriate woodcut illustra- tions.

Broadside printers employed songwriters who would attend trials and early music halls, take notes and quickly write verses, often to fit a popular tune, which the broadside named. Broadside-sellers would shout their “call” and the best parts of the ballad. Often they would sing “come all ye” songs. 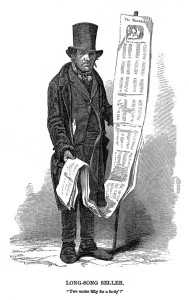 As book printing became cheaper many popular broadside ballads were gathered into chapbooks. The final verses of many ballads offered stern warnings against crime. Ballads such as The dreadful murder of Maria Marten and the red barn door were sung all over Great Britain and taken to Canada, the USA and Australia.

In British and Irish libraries in 1985 the folklore collector Ron Edwards saw counted 160 broadsides with Australian content, notably Van Diemen’s Land and Henry’s downfall, both in several versions. It is likely that none had been printed in Australia, but some ballads had probably been composed in the colonies and taken back to Great Britain and Ireland by former convicts and others.

Broadside ballads were published in Australia, however, in the second half of the 19th century, when their function had already been usurped by chapbooks, especially cheap, popular pocket songsters, such as those of Charles Thatcher. The last known broadside publisher was P.F. Collins – Percy the Poet – who sold ballads at the Sydney Cricket Ground in the 1920s and 1930s, on subjects ranging from mining disasters to sport. Present-day singer-songwriters could be said to continue this tradition.

There are also several broadside library collection indexes that can be accessed by the internet. Simply enter ‘broadside ballads’ for a listing. There are two standard Australian works on these early broadsides:

Folklorist Ron Edwards also issued two volumes of reprinted broadsides as ‘The Transport’s Lament’ and ‘The Convict Maid’. The following was one of the most popular.

Ballads about poaching were extremely common, because poaching itself was so widespread. As the majority of people were unable to procure fresh meat honestly, they took to stealing or poaching. It was so prevalent that it was hardly an exaggeration to say that nearly every man you met was a poacher! It was generally thought that those men were justified in their actions. In 1828 the penalties for poaching became three months imprisonment for the first offence, six for a second and seven years transportation for a third. But if three or four men, one of whom carried a gun or bludgeon, were found in a wood, all were liable for transportation for fourteen years to Van Diemen’s Land. The island was first used as a penal settlement in 1804 and continued as such for another forty-nine years. Port Arthur was considered one of the most dreaded prisons although it was a ‘model prison’.

Come, all you gallant poachers,
That ramble free from care,
That walk out of a moonlight night,
With your dog, your gun, and snare;
Where the lusty hare and pheasant
You have at your command,
Not thinking that your last career
Is on Van Diemen’s Land

There was poor Tom Brown from Nottingham,
Jack Williams, and poor Joe,
Were three as daring poachers
As the country well does know;
At night they were trepanned
By the keepers hid in sand,
And for fourteen years transported were
Unto Van Diemen’s Land.

Oh! when we sailed from England
We landed at the bay,
We had rotten straw for bedding,
We dared not to say nay.
Our cots were fenced with fire,
(we slumber when we can,)
To drive away the wolves and tigers
Upon Van Diemen’s Land.

Oh! when that we were landed
Upon that fatal shore,
The planters they came flocking round,
Full twenty score or more;
They ranked us up like horses,
And sold us out of hand,
They yoked us to the plough, my boys,
To plough Van Diemen’s Land.

There was one girl from England,
Susan Summers was her name,
For fourteen years transported was,
We all well knew the same;
Our planter bought her freedom,
And he married her out of hand,
Good usage then she gave to us,
Upon Van Diemen’s Land.

Oh! oft when I am slumbering,
I have a pleasant dream:
With my sweet girl I am sitting,
Down by some purling stream,
Through England I am roaming,
With her at my command,
Then waken, brokenhearted,
Upon Van Diemen’s Land.

God bless our wives and families,
Likewise that happy shore,
That isle of sweet contentment
Which we shall see no more.
As for our wretched females,
See them we seldom can,
There are twenty to one woman
Upon Van Diemen’s Land.

Come all you gallant poachers,
Give ear unto my song,
It is a bit of good advice,
Although it is not long:
Lay by your dog and snare;
To you I do speak plain,
If you knew the hardships we endure
You ne’er would poach again.
Anonymous. This oral version was collected in Sussex, England, in 1893, and is essentially the same as the broadside in the Kidson Collection and included in Ron Edward’s folio collection, The Transport’s Lament. There are many broadside versions of this ballad including the version collected and annotated by Colm O’Lochlainn in Irish Street Ballads, 1952 edition, as reprinted in Stewart and Keesing’s 1957 Edition of Old Bush Songs. The Baring-Gould collected version cites the tune ‘The Transports.’