It has been said that Australians are ‘sports crazy’.
This section has songs, stories, jokes and lore associated with sport.

One of the most important boxing matches of all time, and certainly the first one referred to as the ‘match of the century’, was the epic ‘battle’ between Heenan and Sayers in 1862. It was the fight that introduced Queensbury’s Rules. In 1973 when recording the life story of Joe Watson he mentioned some verses from a ballad on the fight. After investigation, I found that the ballad had circulation in Australia, especially on the goldfields where fist-cuff fighting was still conducted (despite being prohibited). Here is the ballad.

Another famous fist cuff ‘battle’ took place on the George’s River, Sydney, and is also commemorated with a song. John Foley (Eire) versus Sandy Ross (Ulster).  In this case the opponents were Irish – one from the south, the ‘green’, and the other from the north, ‘the ‘orange’. 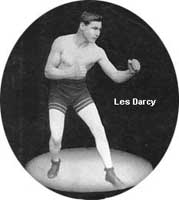 The chorus of ‘Christening The Baby’ mentions all the famous boxers of the period. By Ernest Chappell and specially written in consideration of the Burns/Johnson fight. Brad Tate collected a version of this song in Newcastle. Alex Hood also collected a version. The song itslef is a parody of ‘The Baby’s Name’ – a song about Kitchener.

COLLECTION OF CUTTINGS ON BOXING

Note by ‘Solar Plexus’ and from ‘The Boxer’ on Larry Foley

Foley boasted that never once in his career was he knocked down.
For many years subsequent to when the end of his pugilistic rope had been reached, the great ex-champion earned the reputation of being Champion Demolisher of Sydney buildings. He was the person who supervised the pulling down of the old George Street Markets, and also the Benevolent Asylum’s large building on Devonshire Street, to make room for our up-to-date Central Station.

It should be noted that Queensbury’s Rules were introduced in 1862 after the notoriously bloody fight between Heenan and Sayers (refer to song in AFU Joe Watson collection). Fist-cuff prize fighting was a familiar sight on the goldfields despite being against British and therefore Colonial law.

This sporting song is one of several set to the popular song that ‘was all the rage’. It mentions many of the famous Australian sportsmen. J.L. is John L Sullivan and ‘Paddy’ is Paddy Slavin, both prize boxers.