The Convict Transportation System – AN OVERVIEW 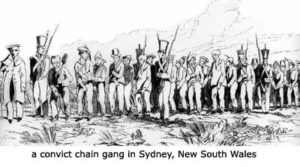 Australia’s convict history shaped the Australian identity. It is hard to imagine how the transportation system was viewed by government and the general population let alone the wretched souls condemned to be shipped to what was generally held to be the ‘end of the earth’. For the authorities it was a system devised to reduce the number of people incarcerated in its asylums, jails and prison hulks. Reports show that the prison system was literally bursting at the seams from an over-zealous legal system, mostly protecting property, be it a piece of cloth or a squire’s holding. As a young lad growing up in the 1950s I regularly heard stories about ‘young boys’, usually around nine or ten year’s of age, being transported to Australia for ‘stealing a loaf of bread’. Although the majority of convicts were considerably older there were certainly some young boys and girls condemned to life in the Australian colonies.

The following section, gleaned from many sources, offers an insight into the why’s, how’s and where’s of the transportation system. Most are first-hand accounts. Grammar and spelling has been retained as per the original document.

A litany of scoundrels, whores, crooks and pimps and why they were sentenced to Botany Bay. Every lowlife gets a serve in this somewhat ribald song that dates back to circa 1790. It was simply called, ‘Botany Bay, A New Song’. Broadside, not dated, c. 1790. This rare find comes from the Mitchell Library, State Library of New South Wales (Ferguson 77), and was originally located by that extraordinary hunter of documents and books, David Scott Mitchell, whom the Australian library is named after. He died in 1907 after amassing an extraordinary collection of rare Australiana, including over one hundred broadsides. The song has been crying out for a tune for over 200 years – so I fashioned one for it.