Sydney Domain – Up on Your Soapbox, Johnny

Victor Zammit could attract crowds of 2000 or more.

UP ON YOUR SOAPBOX, JOHNNY

The Sydney Domain Speaker’s Corner covered the entire park and, in its heydey, especially in the first seven decades of the twentieth century, attracted massive crowds. Its history is the history of Sydney’s ratbags, revolutionaries and rabblerousers. Established in 1878 in the spirit of the international free speech movement its original spruikers let off steam, primarily between the long-feuding Catholics and Protestants. It was a Rafferty’s Rules free-for-all with hatted speakers (nearly everyone wore a hat) elevated on tree-stumps, step ladders and soapboxes. It wasn’t the origin of the colloquial expression ‘mad as a hatter’, but it certainly applied.

As an inquisitive kid, the son of a paid-up member of the Rationalist’s Association, I spent far too many Sunday afternoons at the Domain in the late nineteen sixties and early seventies. These were wild days where the speakers pulled huge crowds. Victor Zammit and John Webster were the big draws: ranting and raving on everything from the art of oratory to sexuality. These were no holds barred freak shows where members of the audience would scream abuse, attempt to take over and, quite often, perform weird dances to a music no one else could hear. It wasn’t unusual for Zammit to atract crowds of 2000 or more. (Now this is spooky – he once chaired a meeting at the Wayside Chapel Theatre in Kings Cross where John Howard spoke). John Webster, a real crowd pleaser and eccentric, ruled his audience with outrageous comment and barbed humour challenging his audience “on religion, free love and the individuals inalienable right to be kinky”. He declared himself to be one of Sydney’s landmarks, along with the Harbour Bridge and Botanical Gardens, and demand his audience purchase his weekly newsletter. Unlike many speakers these two men knew how to project their voices, command an audience and hold it. They both frequently lectured their audiences on how to be an orator!  Zammit, who often spoke on spiritualism, human rights and psychic phenomenon.

Two of the weirdest Domain speakers were fancy dressed. William Chidley, a regular speaker between 1911 and 1916, dressed in nothing but a short white Roman-styled tunic, was imposingly tall with long hair and flowing beard and spoke about sexuality as he flogged his book The Answer. Recommending vegetarianism, fresh air, sunlight and unrestrictive clothing, and criticizingmoneymaking and class distinction, he postulated a ‘correct’ method of intercourse that would ‘take place only in the spring … and between true lovers only’. Chidley was one of the Domain’s true characters. In the 1960s ‘The Wizard’, Ian Channell, also dressed for the Domain with pre-Hogwart’s cape and hat, as he blew bubbles to attract the crowd, to listen to his thoughts on ‘the fun revolution’. 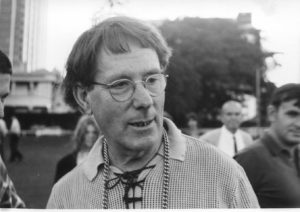 John Webster or, as the crowd knew him, ‘Webster’

Speaker’s Corner started on a serious note at as an outlet for the pent-up steam between Catholics and Protestants that originated with the First Vatican Council of 1869. It was the Orange against the Green and even as late as the 1960s a member of the Loyal Order of Orangemen, and Red-Haired Harry, a Plymouth Brethren, would step up on his box to “open our eyes to the devil Roman church”. He spoke in a strong Northern Irish accent laden with vitriol and then sing hymns from the Believer’s Hymnbook. Another Christian drum-beater was simply known at all as ‘Bluey the bible basher’, so named because of his high blood pressure that, whenever he got heckled, rushed to his face turning it an explosive dark red, as he thumped his bible. Whenever this happened, and it was as regular as the GPO clock, the audience would shout, “Blood pressure, blood pressure, blood pressure.” which only exasperated the situation. To Bluey’s repeated cry of “What if you died tonight – where would you go?” the response was always the same, “The morgue!” 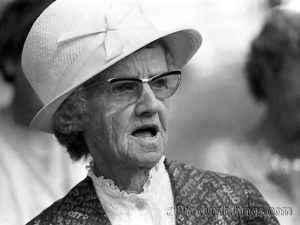 One of the most-loved of the Domain speakers was Sister Ada Green and her peculiar flock who brought fire and brimstone to her corner near Art Gallery Road. They all had the dowdy, sour-faced look of people you wouldn’t want to share eternity with. A small woman who always wore a flowered hat in the shape of a CWA sponge cake, Sister Ada would joyously shout out ‘Praise Jes-us” to which the well-trained crowd would immediately follow with “And pass the ammunition”.“I can save you!” cried Sister Ada, to which the inevitable response would come, “Can yer save me a pretty one?” Whenever she called out “Christ Jesus” the audience would respond with an equally loud “Kraft Cheeses”. This was real old-time ‘saving souls for Jesus’ religion and the interjections were nearly always boisterous and good-natured. Whenever one of her ‘flock’ spoke the audience would groan in mock agony until Sister Ada started thumping her ever-ready tambourine.

The atheists were also regulars at the Domain with cries of “We don’t believe in a creator, or Jesus Christ, no church, no free taxi rides and no heebee-geebee”. There were others too, notably the anarchists, Dr Xarus Sphinx, and later, Bill Dwyer with his booming voice; the socialist Ann Duff; the ‘Bulgarian anarchists simply known as Jack G. and George H, Angela ‘The Poetess’ – and there were rationalists, communists and even a man who spoke nothing but Esperanto. There were regular faces in the crowds too but none so visible as a tall, thin, bald-shaven neo-nazi named Ross ‘The Skull’ May who terrorised speakers and audiences up to the 1970s when he was arrested and jailed in 1972 for bashing a journalist. Other familiar faces were of ASIO special branch officers who were as conspicuous as a pumpkin in a butcher’s shop.

One of my favourites of the sixties was a speaker we knew as ‘The last of the Wobblies’. I never did record his name but as a young student of labour history I was fascinated by his theories on how the Wobblies could save the world. There was something sad in this old socialist soldier’s fight as he yelled: “No God, no flag, no master”. Whenever he cried out “I.W.W.” the crowds would call back an emphatic “I.W.W. – It Won’t Work”. Fifty years earlier speakers from the International Workers of the World had been banned from speaking in the Domain, and some of its members, known as the ‘Sydney Twelve’, goaled for conspiracy in 1916, when they refused to obey the State Labor Government’s ruling. One of these men was Donald Grant, the leader of the I.W.W. in Sydney, and a regular Domain speaker. Grant eventually left the I.W.W. and, in 1923, joined the ALP where he held seats in both sate and federal government. 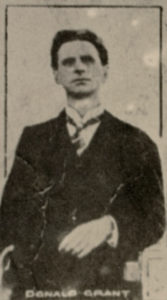 IWW Poster and Donald Grant, one of the Sydney Twelve IWW leaders jailed. 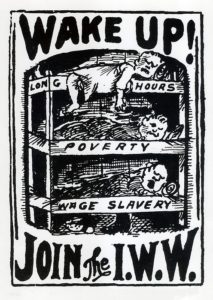 The Domain was also a rallying point for WW1 conscription campaigns and the final stop for the 1915 Billy Hughes recruiting marches that saw thousands of countrymen tramp from Nowra (The Waratah March) and Wagga Wagga (The Kangaroo March) and from Gilgandra (The Cooee March). The size of the Cooee March was so large it stretched down to Martin Place and Sydney Town Hall. The Domain was also the rally point for Australia’s longest running anti-conscription, anti-war campaign – during the invasion of Vietnam of the sixties and seventies.

Today Speaker’s Corner is hardly audible with a couple of spruikers addressing an ever-dwindling audience of homeless and strollers. Maybe retired Prime Minister and now a professional speaker, John Howard, should bring his soapbox and liven things up a bit? I think not.