The Perth scene produced several memorable ensembles.  While it failed to achieve comparable national success, The West Coast Trio rivalled Maguire, White & Stampfer/Ferris on home turf, attracting its own coterie of loyal fans across town at The Shiralee in Howard Street. 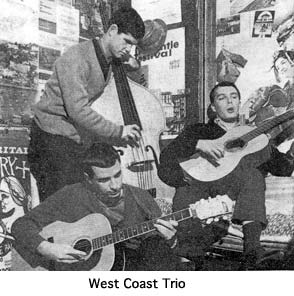 The Shiralee attracted a yuppie element [and] the real folk enthusiasts [maintains Hans Stampfer]. The Quitapena was more a real restaurant. The Twiliters appealed to the teen market [whereas]  The West Coast Trio was more up-market … We were pop folk stars… They were more sophisticated musically although they didn’t have the same raw energy … The WCT was influenced by The Limeliters and were generally more in the style of The Wesley Three. The Twiliters combined the more accessible stylings of The Kingston Trio and captured a certain pulse and feeling.

The group lasted from 1961/2 to 1966, through my university years and my first year teaching [remembers Melidonis]. We had worked up a few folk pieces when we were picked up by ABC producer John Tyrrell who put us on air and later featured us on the ABC TV series Folk Cellar. Tyrrell was an ex-Shakespearean actor; he taught us how to perform rather than just play … Murray was an excellent comedian … Our repertoire was a mix of American songs like ‘Old Dan Tucker’, comic songs like Shel Silverstein’s ‘Espresso’, settings of poems by [WA folklorist] John Joseph Jones or Dorothy Hewett, and international stuff, flamenco, Brazilian songs, etc … The fishing song ‘Curimao’ won praise from Eartha Kitt when we supported her at the Capitol Theatre  … We played at the Fremantle Spring Festival and sang at civic functions at Government House and at a big variety concert in the Supreme Court Gardens. We also played   Sunday evenings at the Foxhole, on the corner of George and Hay Streets, and at Floridata in Wellington Street, the only nightclub in Perth.   Perth was still a country town then … We featured in 3 series of Folk Cellar, along with James Smillie, The Yellowstones and Bruce & Romanie Williams, and we started the University of WA Folk Club … A real highlight was a Town Hall concert with the Andre De Moller Trio.

During the long university summer break of 1964/5 The WCT emulated The Twiliters by heading east (with Wilkins’ double bass strapped, coffin-like, to the top of the car), playing country pubs, Leagues and RSL clubs, and TV shows like In Melbourne Tonight and The Diana Trask Show.  For a while the trio evolved into The West Coast Four with the addition of [ex-Twiliter] Hans Stampfer. Then when work and study pressure forced Robinson and Stampfer to leave, it was back to a trio with visiting student Zaid Aliff. In 1966. The WCT made the finals of the nationally-televised Showcase series with their rendition of ‘Darlin’ Corey’; unfortunately national exposure backfired when it was discovered that Aliff was in the country illegally. He promptly went “underground” and The WCT disbanded. (For a while Melidonis worked in a duo with singer Rod Popham; a professional photographer, he remains active on the Perth music scene up to the present). Unlike The Twiliters, The WCT did not leave a vinyl legacy; their only record was a live custom pressing of ‘Ella Speed’; Melidonis notes, however, that a tape of the trio’s last TV gig, an ABC Special Meet the West Coast Trio still exists.

Also worth recalling is The Wayfarers (not to be confused with the longlasting Brisbane ensemble of the same name).  The youthful ensemble included Kerry White’s brothers Vic and Kim (16 and 14 respectively) and 20 year old Wayne Garton; their impressive takes on PP&M material earned them second place in their heat of Showcase 65 but further success was vetoed when Garton’s number came up in the first Federal conscription lottery. [*For further detail on the early WA folk scene, see my article ‘Recollections of the Folk Boom in Perth’, published in the WA Folk Federation newsletter Town Crier, vol 32(5 &6), 2004; vol 33(1&2), 2005] 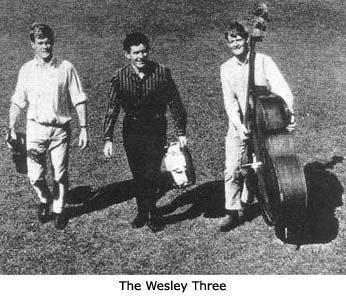 Second in national popularity to The Twiliters was Adelaide trio The Wesley Three, a stylish, musically knowledgeable ensemble which attracted public attention through national appearances on Showcase 65, and recorded 4 albums for CBS: The Wesley Three, City Folk, Banjo and Mr Thwump, Leaning on a Lamp-post.  Formed circa 1963 when Keith Conlon and twins Peter & Martin Wesley-Smith were still at St Peter’s College (“performing paid our way through university”), the trio cited the Chad Mitchell Trio and, more directly, a local pop-group, distinguished by its use of snare-drum, the Dave Fuller Trio. With Conlon on drum, Martin on guitar and Peter on string bass, the trio survived six years until Peter went overseas to do post-graduate work. Their repertoire encompassed the occasional bush ballad (‘Flash Jack’), American perennials (‘Drill Ye Tarriers’, ‘Little David’, ‘Bullgine Run’), vaudeville material (‘Leaning on a Lamppost’), mild social comment (‘Little Play Soldiers’) and children’s songs (a lovely ‘Owl and the Pussycat’ and an original ‘Little Tommy’ which was covered by the American group The Serendipity Singers).

We sang at parties and at school and in 1964 made our first appearance on Channel 7, also on Channel 9’s Adelaide Tonight [recalls Peter Wesley-Smith] .  We played at The Catacombs while we were still at school. Keith also played with the Campus Six … There was a big crossover between jazz and folk. The University Jazz Club brought Paul Marks over … Because Adelaide was such a small scene, it made sense to combine venues … we went on to appear on IMT and Showcase. We travelled to Sydney for three weeks each year, doing the coffee lounge round,  the Last Straw and the Copperfield, and so on. It was heady stuff for young Adelaide kids in the 60s. ..  [Promoter] Jim Carter still owes us for one gig – the Katoomba Festival – which was a complete failure. The whole area was enveloped in fog; Acoustically it was wonderful but you couldn’t see anything but a few lights twinkling … .. Both Martin and I were conscripted in 1965; we managed to have it deferred because of a university and we continued studying. I combined Arts/Law and Honours, then got a special exemption to do a Ph.D. However, the spectre of conscription was over our heads. We had planned to take a year off to devote to music but it wasn’t possible because of the draft. Going overseas to study [in 1968] meant the end of The Wesley Three.

Listened to today, The Wesleys arguably remain the best of the U.S.-style trios by virtue of their musicality and originality. (Martin Wesley-Smith went on to become a leading exponent and composer of electronic music; Peter Wesley-Smith was , for some years, Dean of Law at the University of Hong Kong. Another brother, Jerry [Wesley], is a respected jazz musician in Adelaide; in 1971 he Jerry and Martin teamed with  Keith Conlon and actor Amanda Hodgman for a recording The Glorious Years, released by Jacaranda Press in conjunction with the book of the same title). Another Adelaide band The John Gordon Trio “took off”  briefly after appearing on Showcase 65,  performing at hotels, Leagues and RSL clubs, and the bigger coffee lounges. The trio reportedly combined a folk sound “with a lot of comedy and hokum thrown in”.

(The following additional information was sent by ‘Ronald’, a friend of the Twiliters)   In early 60’s a Perth folk group the Twiliters became a regular feature at a coffee lounge in Unley (Adelaide)  and I got to know the guys  Jim Maguire. Kerry White and Hans Stampfer  at that time I was boarding at the YMCA in a Share Room and had become interested in Folk Music due to my room mate Greg Ferris from Hobart he was into folk music  and also played the guitar and sung folk songs he was very good , I got to know his qualities very well and we used to go to  the Catacombs coffee Lounge in Hackney  and to another one at the East End of Rundle Street  (across the road from another Coffee lounge that I regularly went to  as it had a resident band called BLUES, RAGS & HOLLERS.
I heard of a new Folk Coffee Lounge in Unley so we went there but Greg only went there on the first night but preferred the other coffee lounge as Doug Ashdown was a regular there and like Greg played a lot of 12 String music. I was able to obtain part-time employment at Unley as I had learnt to make espresso coffee at a bowling Alley I had worked at.  So was there most nights except Sunday when I went to CATACOMBS at Hackney (DOUG ASHDOWN played there Sunday Nights)
One night Jim, Kerry & Hans were very serious and deep in a discussion (a group meeting)   later just Kerry & Jim were sitting at the table deciding what they were going to do as Hans was returning to Perth. And  Jim & Kerry were deciding what to do as the TWILITERS were playing for the last time tomorrow. Next Morning  I asked Greg if he would be interested in joining a Folk Group and I explained about the TWILITERS  and he would be the perfect replacement for Hans.  Greg came to Unley that night to hear the TWILITERS and Greg liked them  -I  got Jim & Kerry to come and talk to me about the Future of the TWILITERS  and they said it was too late and I said  I had the perfect replacement for Hans and they said they had not seen any possibilities.  I had arranged for Greg to be booked to do a bracket after the TWILITERS  and Greg were now performing and Kerry & Jim were now sitting back listening to Greg.   When Greg finished he came to the table and I introduced him as the replacement for Hans.    The evening’s entertainment was over and it was just the staff left now and some of the other folk singers.  So Kerry, Jim and Greg decided to do a few numbers as a Trio and they clicked The TWILITERS had reformed on the same night they finished. I returned to Broken Hill for a number of years then moved to London (just before moving to London received the news my friend Greg had passed away) then back to the Hill and in the mid 70’s moved to Perth.  I kept in touch with the guys and on number occasions was able to catch up with them at a gig.  Caught up with Kerry again when I moved to Perth he had the most beautiful voice that you could listen to for hours.  I moved to the Kimberley’s and occasionally caught up with Kerry in Perth and then seen him a few times when I moved back to Perth in  1990  and caught up with Kerry.  But he sadly passed away soon after.  I caught up with Hans a few years back but it was a meeting of acquaintances as we had never had much contact in Adelaide.
There is another TWILITERS connection to Perth a few years ago Greg’s young Cousin moved to Perth and he is the proud owner of Greg’s Guitars and Amplifier.