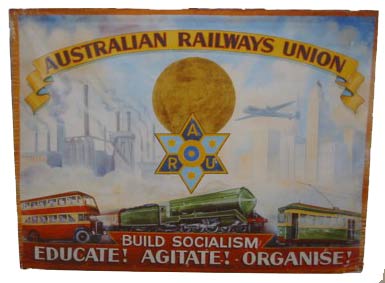 This great old union poster is framed in the RTBU office in Sydney.

May Day is traditionally the annual celebration of unionism. This is following statement, complete with rhetoric, is typical of the ‘union speak’ of the time.

The 1920s and 30s saw the emergence of several socialist labour groups and parties including the International Workers of the World and The International Socialists. These groups played a leading role in revolutionising industrial law in Australia. They also produced many songs and poems ‘for the cause’, such as The Scab’s Dream and the poems Who Owns What and Without a Card.

Journal note:
The poem (Without a Card) has special significance for railway workers in NSW for in no other calling is a similar state of affairs allowed to prevail. When working-class understanding is established, those who do not conform will meet a just fate.

These, of course, were extremely turbulent times with the position of labour continually under review and also under attack by capitalism and government both retaliating the forces of extreme left wind groups such as the IWW and Communist Party. Whilst it took on the usual business of a union newspaper it is interesting to see how wide the rail industries spanned. Even the Railway Refreshment Room staff conditions were addressed in every issue! It is hard to realise just how massive the rail industry was at this crucial time of Australia’s industrial growth – it affected so many sectors of manufacturing and service including the supply of rolling stock, timber, water, steel, bridges, leatherwork, coal, electricity, cleaning, mail service, lube and millions of nuts, screws and bolts! The other notable feature is the number of sporting and cultural groups affiliated with the various rail unions.

Sport was also covered – especially if the journalist could get a railway spin on the story.