A PORTRAIT OF A SYDNEY SUBURB

Paddington born. Paddington Bred.
Thick in the arm and strong in the head

Early Paddington was comprised of gullies, sand hills, huge scattered rocks, scrub, hills, falls (later to be known as Glenmore Falls) and a lot of swampland. Today’s Paddington is a much different place, and one that salutes its past as Aboriginal land, military settlement, hospital, cheap housing, factory quarter, home to eccentrics, ‘renovator’s dream’ and supposed ‘trendy’ and expensive suburb. 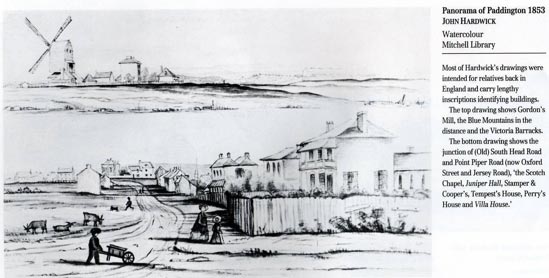 What we now know as Paddington wasoriginally home to the indigenous Cadigal people. These people belonged to the Dharug (or Eora) language group, and were also the traditional owners of what is now the Sydney central business district. It is known that the ridge upon which Oxford Street was built was also a walking track used by Australian Aborigines.

Much of the Aboriginal population of Sydney was decimated by the smallpox outbreak of 1789; only one year after the First Fleet arrived in Sydney. Settler’s records from the time indicate that only three Aborigines belonging to the Cadigal tribe were left after this outbreak, however some anthropologists maintain that the tribe dispersed into other areas of the shared Eora language group. History for Aborigines living in Paddington is hard to find, but it is known that at the time when Robert Cooper began to build the first house in Paddington, there were approximately 200 indigenous people living in nearby Woolloomooloo, in huts that Governor Macquarie had built for them.

Paddington has never been a suburb with a dense Indigenous population. In the 1930s when parts of Sydney such as Redfern and Glebe became hubs for Aborigines entering the labour force, Paddington continued to be a white-man’s working suburb.

Woolloomooloo, and this will surprise many, was once the most desirable area to live but that suburbs fascinating history is another story. It was ‘killed’ by a lack of creative industriousness and over-zealous industry and, later, misguided government. For a social history of Woolloomooloo visit http://www.warrenfahey.com.au/woolloomooloo/ 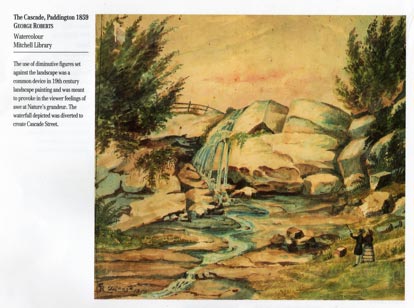 Paddington, like other inner city suburbs, grew as the Colonial government offered notable citizens ‘land grants’. Rather than ‘jobs for the boys’ it was a case of ‘plots for the boys’ – and if you were in favour you got a larger piece of land and in a suitably desirable position. In the early 1800’s Thomas West was granted land in Lecrosia Valley, now central Paddington. The land was cleared and by 1810 West had built a house and watermill and planted an orchard. The area continued to develop with the building of the road to South Head, now Oxford Street, in 1811.

Another early inhabitant, John Palmer, refused to allow people to cross his land, so the road followed a roundabout way through Paddington. It was this fact that resulted in the suburb having so many twisting roads as they tried to avoid Palmer’s property. In the 1970s local councils began closing many streets and making others one-way. Palmer would be smiling on the chaos.

In 1810 Governor Macquarie set aside 1,000 acres of land for leisure use. The area was eventually named Moore Park after Charles Moore, Mayor of Sydney 1867 – 69. In 1879 Sydney’s first public zoo was established in this park. It was relocated to Bradley’s Head in 1916. Today, Moore Park remains dedicated to recreation with tennis courts, a golf course, the Sydney Cricket Ground and Football Stadium within its boundaries.

Messrs Cooper, Forbes and Underwood (all recognisable for the streets named after them) must have been in the good books as they all received sizeable land grants. 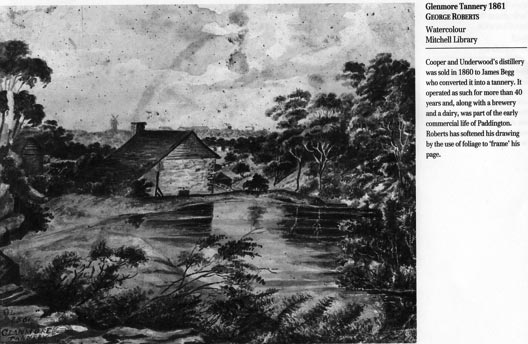 Mr Underwood who received 100 acres, later joined Mr Cooper and Mr Forbes, to establish a distillery about 1818, in a section of Glenmore Road known as Frog Hollow. Heaving bullocks took the gin barrels up to a depot near Taylor’s Square.

It was Robert Cooper, an ex-convict, who built Juniper Hall, as his residence (the juniper berry being the main ingredient for gin). The grand house was later known as Ormond House, and was an institution for destitute children. It should also be noted that The Benevolent Society, Australia’s oldest charity, was established in Paddington. 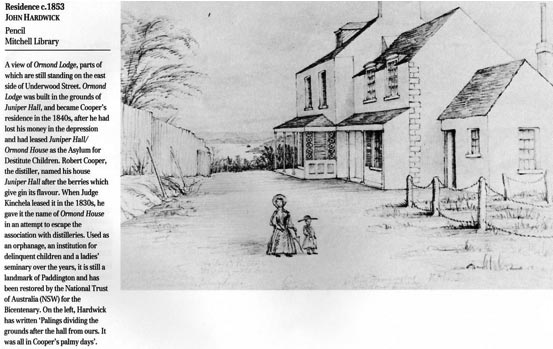 The distillery on Glenmore Road had its ups and down, it was later sold to Mr Begg in 1860 for a tannery that, according to records, stank to high heaven. Around 1905 the Colonial Rubber Company occupied it for a few years. It was eventually demolished and replaced with terrace houses.

The suburb was named after the London borough, Paddington and is one of Australia’s oldest suburbs. The story of Paddington gives an insight into a fascinating heritage area. ‘Paddo’, as it is now affectionately known, is a tightly packed mass of terrace houses and is one of the world’s finest examples of totally unplanned urban restoration. 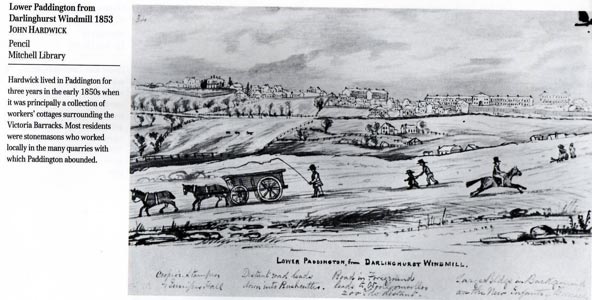 Early Sydneysiders liked to visit surrounding bushland and Paddington slowly became a fashionable colonial drive en route to the ocean coast but it still took most of a day for a horse dray or buggy to travel to the seaside of Bondi, Watson’s Bay or Coogee and back again. Trams changed that.

Paddington was very popular with children who collected the geebungs, five corners, native watercress and native currants in the suburb’s bushland. There were several popular picnic grounds.

The first hotel seems to have been built on the corner of Dowling & Oxford by a sergeant of the Police Force named Armstrong. At the time there was a wool washing operation in Lachlan Swamp, now Centennial Park. The bullock drivers were the hotel’s main custom.