MANAVILINS
A collection of sea shanties with an Australian connection 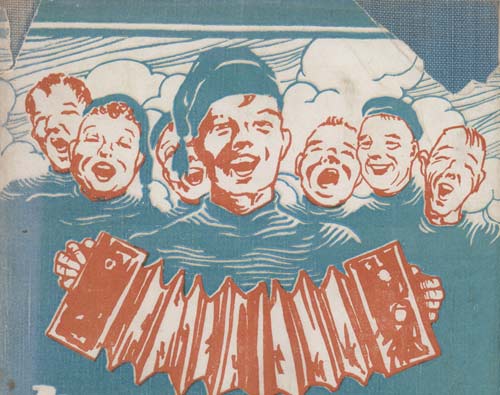 In 2009 I was presenting a concert to the Naval Heritage Society at their clubrooms on Sydney’s Garden Island when one of their members approached me with an old book saying, “this belonged to my father”.
After nearly fifty years of hunting for Australian musical references in published materials I consider myself fairly well versed in such publications but this was a collection that I hadn’t seen, or if it did come my way I hadn’t referenced the Australian material.

The book was titled Manavilins, a word I hadn’t encountered and flicking the book’s pages I noted the introduction by its compiler Rex Clements: “The word ‘manavilins’ will be found in no dictionary. It is a product of the deep sea, salt-encrusted and untouched; a fragment of sailor language native to the Trades and blown solitudes further south. Familiar in the mouths of sailors of the sail, it has not survived into the days of steam nor become a part of the speech of folk ashore. It would be rash to hazard a guess as to the origin of the word. Like ‘shennanikin’ it defies the philologist. One can only say that it was used to denote unconsidered trifles, the ‘crumbs which fell from the rich man’s table;’ in other words, those delectable scraps of sea-pie, plum duff and the like, left over from the cabin table, which occasionally found their way for’ard to supplement the more Spartan fare of half-deck and foc’sle.”

Be ye stockmen or no, to my story give ear.
Alas! for poor Jack, no more shall we hear
The crack of his stockwhip, his steed’s lively trot,
His clear “Go ahead, boys,” his jingling quart pot.
For we laid him where wattles their sweet fragrance shed,
And the tall gum-trees shadow the stockman’s last bed.
Whilst drafting one day he was horned by a cow.
“Alas!” cried poor Jack, “it’s all up with me now,
For I never again shall my saddle regain,
Nor bound like a wallaby over the plain.”
His whip it is silent, his dogs they do mourn,
His steed looks in vain for his master’s return;
No friend to bemoan him, unheeded he dies;
Save Australia’s dark sons, few know where he lies.
Now, stockman, if ever on some future day
After the wild mob you happen to stray,
Tread softly where wattles their sweet fragrance spread,
Where alone and neglected poor Jack’s bones are laid.

This sentimental song is also known as ‘The Stockman’s Lone Grave’ and was first printed in Bell’s Life in Victoria, 1857, as ‘The Stockman’s Grave’. The music is ‘The Boatswain’s Last Whistle’. My version comes from ex-stockman, Rad Dawson, Forrester’s Beach, NSW, in 1973, who sang it with great reverence, told me that the song was known to all stockmen. (Rad Dawson/Fahey. National Library ORAL TRC321/3).

A version appeared in the 1865 publication The Queenslanders New Colonial Campfire Songbook including a note that it was sung by the Pioneer Minstrels. Another version was published eleven years later in The Stockwhip Magazine adding that it “was an old song”. So, as you can see, it has been knocking around the bush for quite some time. To me the song has a dark spiritual feel and I like the reference to ‘Australia’s dark sons’ being the only likely ones to know the secrets of the grave.

Clements in his introductory notes points out that the book is “a muster of sea-songs, as distinguished from shanties, written for the most part by seamen, and sung on board Ship during the closing years of the Age of Sail 1890-1910.”
‘Manavilins’ was published by Heath Cranton Ltd, 6 Fleet Street, London, 1928. This company also published two other books by Clements: A Gypsy of the Horn and A Stately Southerner.

Here is the text as published in his book.

Be a stockman or not, to my story give ear,
Poor Jack’s gone at last and no more shall wehear
The crack of his whip and his steed’s lively trot,
Or his clear “Go ahead!” and the jingling quart pot.

In the North, where the wattle and wildflowers wave,
The tall gum tree shadows the bushman’s lone grave.

For one day poor Jack was charged by a steer,
“Alas!” cried he then, “It’s all up for me here,”
The seat of my saddle I shall ne’er mount again,
Nor bound like a wallaby over the plain.

“My stockwhip lies idle, my steed it may mourn,
And the dogs look in vain for their master’s return,
All alone and uncared for, unpitied I die,
And Australia’s wide sands must tell where I lie.”

Then, stranger, if ever you pass by this way,
In search of wild cattle that happen to stray,
Tread lightly down yonder, for there he is laid,
Far away from home where in childhood he played.

In his introduction to the song Clements says, ‘The following song I heard from the lips of an old sailor – one of many who diversified the monotony of his sea voyages with an occasional spell at sheep-riding, well-sinking, fencing and the like in the Australian bush. He said that on one occasion up in the North Wilcania at the head of the Darling, one of the boundary riders among the party, himself an erstwhile seafarer, composed this song. It became popular, and from the bush-riders eventually trickled down to the seamen in the coast ports, to many of whom it was sung on board ship in the nineties.”

It is always a challenge to attempt to date a song. The version Paterson published in his 1905 collection was the same as had been published in the Queenslander on 7 July 1894. As Paterson commenced assembling his collection in 1885 (refer correspondence A&R MSS Collection/Mitchell Library) it stands to reason he took his song from this publication. The Queenslander text was submitted to the newspaper by ‘Jessamine’ of Bowen, Qld. The 6 October edition of the newspaper carried some correspondence from “C.W.” , a Victorian who also had a set of verses for the song, claiming a Mr Thomas Townsend (Deceased), as the author. (see ‘Songs Of The Bush’/Philip Butterss, 1991).

Such claims of authorship are usually taken lightly by folklore collectors. Time has a way of blurring facts. All too often a song in a singer’s repertoire becomes so closely associated with them that even they assume they wrote it! In a way I prefer to think these songs are part of a continuing story and authorship claims are just part of the song’s travels.

As far as sailors singing bush song – why not – bushmen certainly sang sailor songs and, as Clements notes, “There is a class of song which calls for attention. It is that which deals, not with the sailor, but with certain classes of men whom he was closely in contact. The hardy cattlemen of early Colonial days, for instance, who played a manful part in opening up the vast backblocks of the southern continent, were often recruited from the ranks of clipper seamen.”

Clement’s notes to the songs and shanties he included in the book smack of the real thing. At one stage he talks about the providence of sea songs and how some sailors reacted when questioned about variants of words and tunes, “They started solemnly at the questioner until one black-haired giant, in a red woolen shirt, hitched his trousers defiantly and answered, “We never learnt it nowhere; we allers knowed it.”

In another section he addresses the sailor’s reputation for having a girl in every port, and cites a song verse:

I’ve another in Canada,
South Africa and India,
I’ve another on my knee;
But the one in Australia –
She’s the girl that did for me.”

Another song has a distinct Australian reference. In the late 1950s Norm O’Connor and Bob Mitchell recorded the repertoire of Captain Watson, a member of the Shiplover’s Society of Victoria. One of his songs was titled ‘According to The Act’ and contained a chorus of
Lay aft, boys, lay aft, and see you get your whack,
Of lime-juice and vinegar, according to the Act.

Clement’s informant had it as ‘The Limejuicer’ with a refrain of:

Shout, boys, shout, I tell you it’s a fact,
Everything’s done in a limejuice ship according to the Act.

And all around the deck , my boys, with many a curse we ho,
A-wishing that eight bells would strike and we could go below.
Eight bells has struck! The watch is aft! The log is have exact!
“Relieve the wheel and go below!” according to the Act.

Many of the other songs in this book were sung on the Australian run, one could say all of them would have had some currency here, and much of what Clements says about how sea songs traveled is pertinent. Looking at the list of songs in this collection reinforces Clement’s claim that these were actually the songs sung at the great shipping changeover of the beginning on the twentieth century. There are other shanty and sea song collections from this time, many tinged with more than a touch of nostalgia for the end of the clippers (and few mention the steam/sail). One of my early informants, Jimmy Cargill, himself a sailor of this changeover period, knew many of the 24 songs in this book including ‘Outwrd Bound’, ‘The Banks of Newfoundland’, ‘Spanish Ladies’, ‘Rolling Home’, ‘Paddy West’ and ‘The Wild Rover’. A couple of the early songs in the collection like the historical ballads ‘’The Saucy Arethusa’’ and ‘The Princess Royal’, although popular, tended to be found as broadsides rather than in the oral tradition. Appropriately the songs are divided into sections: Historical Ballads, later Historical Ballads, Professional Songs and Ditties, Sentimental and Humouq hrous.

I was lucky to find a copy in the rare books section of Abebooks.