The famed songwriter and poet, Jack Moses, was born in Sydney at the height of the 1860 rush for gold.
His most famous song is Nine Miles From Gundagai

I’ve done my share of shearing sheep,
Of droving and all that,
And bogged a bullock team as well,
On a Murrumbidgee flat.
I’ve seen the bullock stretch and strain,
And blink his bleary eye,
And the dog sit on the tucker box,
Nine miles from Gundagai. 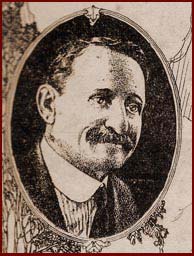 I’ve been jilted, jarred, and crossed in love,
And sand-bagged in the dark,
Till if a mountain fell on me
I’d treat it as a lark.
It’s when you’ve got your bullocks bogged
That’s the time you flog and cry.
And the dog sits on the tucker box,
Nine miles from Gundagai.

We’ve all got our little troubles,
In life’s hard, thorny, way.
Some strike them in a motor car
And others in a dray.
But when your dog and bullocks strike
It aint no apple pie,
And the dog sat on the tucker box,
Nine miles from Gundagai.

But that’s all past and dead and gone,
And I’ve sold the team for meat,
And perhaps some day where I was bogged,
There’ll be an asphalt street.
The dog, Ah! well he took a bait,
And thought he’d like to die,
So I buried him in the tucker box,
Nine miles from Gundagai.

These lyrics, based on an earlier mythical story, found favour with the bush and, like some of Lawson’s and Paterson’s works, found themselves travelling the bush with a different tune and lyrics. 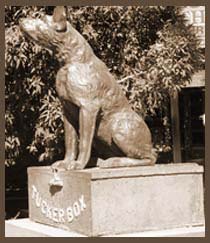 Jack Moses also travelled the bush in life for he was a travelling salesman for wine. He was a regular and welcome face at the various agricultural shows and, according to history, good at both spruiking wine and reciting poetry. According to an article by ‘El V’ (Bulletin 5 May 1938), Moses’ father ‘came out from London in Macquarie’s day to marry a merry Irish girl. This fact possibly explains Moses’ love of the bush ballad.

He must have attained quite a reputation for the 1920 publication The Bulletin Book of Humorous Verses and Recitations was dedicated to him as a ‘Good Australian’ who was ‘for many years a Bulletin reciter in the bush.’

One of his favourite authors was Henry Lawson, who in the poem Joseph’s Dreams (1923) refers to Moses in stating ‘my best friend was a Yid’; Moses recalled their friendship in Henry Lawson by His Mates (1931). (a ‘yid’ was a reference to a Jew however, according to Jewish law, if his mother was Irish (as above), then Moses was not technically Jewish). The word ‘yid’ (short for Yiddish) has gone out of popular use. It was used by Jewish comedians like Roy Rene against themselves.

Jack Moses was a long-time contributor to the Bulletin, the Sydney Mail, Smith’s Weekly and many other journals and newspapers.

This little humorous verse by Jack Moses could possibly be based on truth. Maybe not!

When The Police Force Couldn’t Spell

Years ago when our land was new
Scholars then were very few
A poor old cabby’s horse dropped dead
In Castlereagh Street, it is said.

Policeman ‘9’ was standing by
And saw the neddy fall and die
“on this I must at once report –
Can I spell Castlereagh?’ he thought.

‘Nine Miles from Gundagai’ was published in 1938 as a volume of verse.

Like much of Australia’s early folklore, the origins of the Dog on the Tuckerbox are comparable to the ongoing debate about the origins of Waltzing Matilda.

There is every reason to believe the tale was based on fact. The roads, if one could call them that, were little more than tracks and prone to either dust or mud. The giant iron wheels of the bullock wagons would have tore the dirt road to pieces and, with the first downpour of rain, would become muddy bogs. Easy conditions to snap an axle and snap a bullock driver’s determination. It’s probably one of the reasons bullockies had such a fearsome reputation as swearers.

It was also not unusual for a bullocky to leave his trusty dog in charge of the camp and bullocks, when he trudged off to the nearest homestead or town for assistance. One can almost picture the dog sitting on the tucker box waiting for his master’s return.

In the 1850s, hot on the tail of this legend, came a poem by anonymous scribbler called ‘Bowyang Yorke’. This is the poem that inspired Moses to write his poem.

As I was coming down Conroy’s Gap,
I heard a maiden cry;
‘There goes Bill the Bullocky,
He’s bound for Gundagai.
A better poor old beggar
Never earnt an honest crust,
A better poor old beggar
Never drug a whip through dust.’
His team got bogged at the nine mile creek,
Bill lashed and swore and cried;
‘If Nobby don’t get me out of this,
I’ll tattoo his bloody hide.’
But Nobby strained and broke the yoke,
And poked out the leader’s eye;
Then the dog sat on the Tucker Box
Nine miles from Gundagai.

(the ‘beggar’ could quite possibly be ‘buggar’) 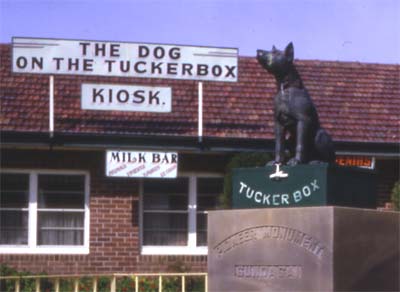 Jack O’Hagan continued the legend in his version of the song in 1937. This song firmly put Gundagai on the world map and became a firm radio and gramophone popular hit. It has been recorded by hundreds of artists and is considered quintessentially Australian.
Charming historic township on the banks of the Murrumbidgee River

Gundagai is situated on the Murrumbidgee River at the foot of Mt Parnassus, 387 km south-west of Sydney. It is located just off the Hume Highway about halfway between Yass and Holbrook at an elevation of 225 m. The monument of the Dog on the Tuckerbox lies about five miles (eight kilometres) north of the New South Wales town of Gundagai and has become an icon of Australia’s past.

The big question about Jack Moses’ poem is whether the dog ‘sat’ or ‘shat’ in or on the box! Did the poet willingly censor himself?
The answer to this can be found in a booklet published in 1932 for the commemorative ceremony unveiling the monument at Gundagai. The booklet explains the early myth and relates how one dog, near Five Mile Creek, actually shat in the tucker box while waiting for his master’s return.
On hearing this Moses wrote a ditty:

Good morning mate, you are too late,
The shearing is all over,
Tie up your dog behind the log
Come in and have some dover.
For Nobby Jack has broke the yoke,
Poked out the leader’s eye
And the dog … in the tucker box,
Five miles from Gundagai.

So, that’s the original anonymous piece that inspired the Moses poem and, later, the O’Hagan song.

After his retirement Jack Moses settled in Sydney, where he was a affectionately regarded as a ‘character’, who distributed postcards of his poems.