SONGS FROM THE MINES OF AUSTRALIA

I have a long-standing interest in mining in Australia. I suspect I was inspired when, as a young lad in the early 1960s, I came across a small pamphlet of songs put together by the British singers A. L. Lloyd and Ewan MacColl. It was titled ‘Shuttle and Cage’ and contained songs from the northern English coalfields. It was also around the time I started thinking about undertaking some song and story collecting in Australia. I was curious as to why there were so few mining songs here, especially since the role of minerals in our history. I assumed, correctly, that the few pioneer collectors like John Meredith and Norm O’Connor, went for the obvious – the bush song tradition, which, by its nature, was primarily concerned with rural pursuits, especially shearing, droving and bush life. When I decided to go bush with a tape recorder the first destinations were mining communities like Cessnock, Kurri Kurri, Lithgow and Kapunda. The more I looked the more I realised we had overlooked our industrial folksongs. Yes, I did collect many songs and ditties and the very first album I produced for my fledgeling Larrikin label was titled ‘Man of the Earth’ and contained mining songs. I kept collecting mining songs and, in 2015, assembled a large book which I called ‘The World Turned Upside-down’, for that is exactly what the discovery of gold did to Australia. I also produced an album of some of the songs, ably helped in the studio by Luke Webb, a fine singer and musician, and Marcus Holden, my longtime music producer and accompanist.

Here are two traditional singers from the Warren Fahey Collection in the National Library of Australia. Both were recorded in Broken Hill, 1973. 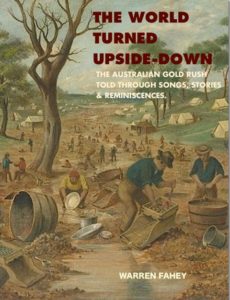 The discovery of gold indeed turned the world upside-down. This song, with its chorus of “Going up to Summerhill, the gold mine for to see” was published in Poems Written in Youth by William Walker (Sydney 1984) with a note that the song was written “at the outbreak of the Gold Diggings in 1851.” prog is an early Australian term for food. It was written as a parody of ‘Oh Susannah’

The following in the introduction to ‘The World Turned Upside-down’ ebook.

Australia’s first payable gold was discovered by Edward Hargraves at Summerhill Creek, near Bathurst, NSW in 1851. Gold mania immediately swept the colonies. Prospectors cancelled their trips to California and thousands of clerks, labourers and servants ‘bolted’ from their work to head west to the newly named ‘Ophir’ goldfields. “If this is gold country,” said the Colonial Secretary, “it comes on us like a clap of thunder, and we are scarcely prepared to credit it.”

Bell’s Life in Sydney and Sporting Reviewer, established in 1845, always regularly published topical verse and, on 31 May 1851, in an article headed “On the gold-digging epidemic now raging in New South Wales”, it offered this ditty predicting the Australian goldfields would prove far larger than California.

‘It’s Off to the Diggings We’ll Go’ sung by Luke Webb, Warren Fahey and Marcus Holden.

The story of gold mining in Australia has been told many times but this book offers no ordinary facts and figures history – it is more of an emotional history – from the men and women who were diggers or first-hand observers on the goldfields during the 1850s gold rushes and the later company mines. It is also a songbook and assembles many of the early songs circulated through the oral tradition, concert halls, goldfield shanties and published songsters and in reader contributions to newspapers and magazines. Many of these songs are published for the first time.

Australia has been blessed with minerals. It has been our saving grace and curse for centuries. The goldrush of the mid 19th century changed Australia forever adding over a million people in just two decades. It was also important socially as the gold diggers forged an independent working spirit that became a major part of who we now are as a people. Shearers and, later on, coal miners inherited this independent spirit and it resulted in Australia claiming the world’s first democratically elected socialist government.

Today’s Australia is still mineral rich and, thankfully, it has helped us ride through the so-called Global Economic Crisis. We still battle with side issues of workplace relations, environmental sustainability, increasing reliance on partnerships with relatively new partners like China and India, and that age-old balance of who actually owns mineral wealth. It is important we know our mining history so we can properly establish where we are today, and where we should be headed.

In this book, there are some fascinating diary reports from the goldfields, extracted from digitized manuscripts and other print sources. The Australian TROVE project has been digitizing early newspapers and magazines for several years and now offers researchers millions of pages and has been a boon to revealing new material, especially in my folklore work in locating rare songs. Frustratingly the scanning of early printing often results in gobbledygook and one needs to painstakingly correct the type extracts.

Most of the songs in the collection come to us from anonymous writers however there are two exceptional contributors – Charles Thatcher, better known as ‘The Colonial Minstrel’ and Joe Small, a well-known colonial singer and music publisher. The role of these ‘popular’ songwriters and music publishers cannot be underestimated for their songs definitely traveled far and wide. There is some illuminating new insights to both Small and Thatcher including an observation of an actor who worked with him in Ballarat who pointed out that “Thatcher was not much of a singer but hugely popular as a satirist.”

Here is a song about shipping agents, the men who arranged passage on the many ships in and out of our harbours. Some trips were back to Europe, Asia or across to the New Zealand goldfields, or around Australia to a new rush. Some of the unscrupulous agents took advantage of the ‘innocent’ diggers and, after receiving their passage money, were never seen again. Charles Thatcher didn’t hold back in exposing them and you can imagine him belting this one out in a goldfields hotel to the tune of ‘Campdown Races’.

Wherever possible I have provided traditional tunes for the songs, most of these were specified in the original publication or come to us from versions collected in the oral tradition. A handful are offered as ‘suggested tunes’ having been married to verse by singers in the 20th century. The fact that so many published songs, in newspapers, magazines and songsters, specified traditional airs is a testament to the importance placed on such tunes in the 19th century. There are several databases offering midi files to traditional tunes. I recommend The Digital Tradition. I have also included, where possible, references to Australian recordings, including some of my own, for recorded songs.

There are two aspects of the songs that I would highlight. One is the influence of American minstrel music on our gold songs and the other is the art of parody. Minstrel music was extremely popular in Australia from the late 1840s and became particularly popular in the 1850s and 60s when several major American minstrel troupes, mostly black face, toured extensively. Parody, including parodies based on minstrel songs like ‘Oh Susanna’, had wide circulation and were, understandably, an easy way to get a song to travel. You will also find some good honest doggerel but remember these sometimes awkward rhymes delighted many a lonely miner as he sat by the campfire at night.

Warren Fahey sings ‘The Mines of Australia’, a song he collected in the early 1970s and typical of the mournful verse written by many a dejected digger. One suspects the story was a common one, and not very nice at that!

Two friends travel to Australia to dig for gold but only one, the singer of the song, returns. It appears as a Victorian melodrama of foul play where our remorseful singer has likely hit his friend on the head with a shovel and pocketed his share of the gold. I recorded this song from two singers in the nineteen seventies, Mrs Dee Clarke, Sydney, and Cyril Duncan, Brisbane.

Warren Fahey sings ‘Pint Pot & Billy’, a song he recorded from the singing of Cyril Duncan, Hawthorne, Qld, in 1974.

How revealing some of the miner’s diaries are, be they of emigrant’s travelling to Australia, usually with a mixture of trepidation, optimism and fear, or those written in a crude tent, in the goldfields. We are fortunate to have these windows into the hearts of these adventurous people. There are also many reports, personal accounts and reminiscences of colonials observing life on the goldfields – how they travelled, how they lived and their successes and disappointments.