By mid 1964, Mooney was averaging five nights a week at the Jolly Roger, the Reata, the Treble Clef, Hernando’s and elsewhere, treating audiences to his versions of I.R.A. laments, Irish ballads and the occasional Australian folksong, and earning an enviable reputation for the quality – and purity – of his approach to folkmusic. “Young girls would fall madly in love with Brian”, recalls Mary Traynor. One girl, in particular would frequently sit on a bench opposite him (when he played at Traynors), tears streaming down her face, totally absorbed in his music and in the passion with which he transmitted his visions of love, life and injustice in Ireland. Mooney’s spare time was spent learning new songs and painting in the romantic – if Spartan –  artist’s loft he occupied in Amess Street, Carlton. The loft featured in a 16mm. short film Moonshine, a black-and-white celebration of the Carlton-based arts and theatrical circle within which he moved. Film-maker Kristen Lofven (later Kristen Williamson) assembled a sequence of evocative glimpses of inner-city back lanes, Peter Laycock’s rural pottery studio, Grinders’ Coffee shop in Lygon Street, and  comings and goings at 205 Drummond Street (a group house which served, throughout the ‘60s, as an informal gathering place for a diverse cross-section of folksingers, actors, educators, writers and painters), all against a soundtrack of Mooney performing ‘The Spanish Lady’, ‘Salley Gardens’, ‘Quiet Land of Erin’, etc. The film premiered at the Carlton Movie House, next door to Genevieve’s Restaurant in Faraday Street, in 1964.

Mooney’s loft, shots of which open and close Moonshine, was bedecked with his landscapes and a few treasured prints, among them a Modigliani nude. Garry Kinnane recalls that the police raided the loft one night, alerted to the sound of “mass folksinging” inside. Names and addresses were being taken when one of the investigators spotted the nude. “Who did that?” was the demand. Informed that the culprit was Modigliani, the senior officer grunted: “Get his address too”.

A survey conducted among Monash University students in 1965 placed the popular Mooney some ten points ahead of second place-getter Wyndham-Read as “favourite Melbourne folksinger”, and even Charles Higham, in his otherwise scathing analysis of the Australian folk scene, singled out Mooney and Wyndham-Read as “the only two singers everyone in the folkie cult seems unanimously to respect” [Bulletin, 14 Nov 1964].  Mooney farewelled the local folk scene in 1966, electing to settle in his beloved Ireland. Don Carless remembers being concerned that, smitten as he was by his romantic conception of  “the auld sod”, he would find the reality heart-breaking. As it turned out, “it all happened” for him and he felt at home from his first day there. Wyndham-Read, similarly, returned to Britain at the beginning of 1967. (After many years in Irelad, Mooney currently lives in Launceston; Wyndham-Read, based in Britain and France, is a regular visitor to Australia). 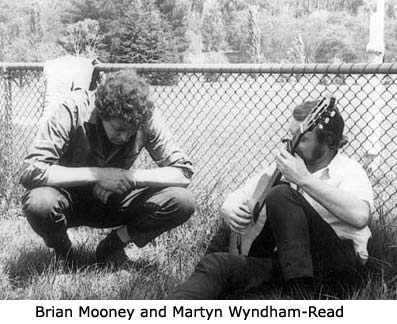 Memories of Mooney and Wyndham-Read, in their Melbourne heyday, are preserved on the recordings they made, as soloists and together, for the Score and W&G labels: Moreton Bay, Will Ye Go Lassie Go, Brian’s two LPs and one EP of Irish songs; Australian Folk Festival and Australian Folk Night; Martyn’s Bullockies Bushwackers and Booze, Australian Songs and A Wench a Whale and a Pint of Good Ale. (The last featured Danny Spooner, Gordon MacIntyre and Peter Dickie).

Other early coffee lounge performers who managed to work professionally (or semi-professionally) at the Reata, Ad Lib, Jolly Roger, etc., as early as 1962, included Sydney-born Don Ayrton (b. 1938), a former junior executive with an international building firm, who had learned the customary three guitar chords in a King’s Cross flat after hearing and enjoying a Burl Ives record. Ayrton found regular singing work in Melbourne following a well-received appearance at the Pete Seeger Benefit Concert. He specialised in Scottish material, and gained wider exposure by providing the musical backing for several short films, two of them for the ABC. A tortured soul who died far too young, Ayrton is remembered as “a magical singer”, gifted with a photographic memory which enabled him to look at a song and learn it.

Ken White, who grew up listening to jazz and nurtured a life-long passion for black music, was among the early singer-guitarists recruited to share the bill with more mainstream vocalists and Dixieland and Bebop ensembles at Jazz Centre 44. A less than sedate venue, the Centre (also known as Katherina’s Cabaret) was opposite Luna Park in St Kilda: its patrons included local prostitutes and brawls were frequent. White was a died-in-the-wool blues buff who went on to be a fixture on the folk club circuit and a key influence on younger guitarists through his work as a soloist and in numerous groups – most memorably, a duo with Graham Squance. Mary Traynor remembers White as one of the standout acts of the era, “a talent greatly overlooked”.

Garry Kinnane found that playing American folksongs at the Ad Lib (and later at the Copper Kettle, the Reata, the Little Reata and other coffee lounges) was a far more pleasant way to eke out a living than working as a clerk in an office, or as an insurance salesman. Having made the move from classical guitar (favoured by most of the early Melbourne folkies) to a steel-strung Gibson, Kinnane (along with Trevor Lucas) has been credited with popularising American instrumental techniques within the Melbourne folk scene. He was also one of the earliest performers to emphasise the richness and diversity of American folk traditions. A devotee of left-wing American culture, Kinnane progressed quickly from performing Joan Baez’s Appalachian ballads and bluegrass to interpreting the contemporary broadsides of Phil Ochs, Tom Paxton and Bob Dylan.

Dylan changed the whole scene [he observes]. He completely changed the picture. He made us realise you could actually belong to a continually creative tradition. You could write songs, play acoustic guitars – doing what he learned from Woody Guthrie.

Kinnane remembers that his increasingly contemporary and protest-oriented repertoire was regarded with a degree of scepticism (initially at least) by traditionalists like Mooney and Wyndham-Read. The only American singer they had much respect for was Seeger. He believes that his repertoire was immediately validated by the start of U.S. and Australian involvement in Vietnam. It “was almost as if our worst fears had been proven”; Vietnam was irrefutable evidence that warnings by Dylan and Malvina Reynolds against nuclear holocaust had been “very, very relevant”. Kinnane had started writing his own topical material, including a talking blues on a Pentridge Prison breakout and a song about the Voyager disaster. At the end of 1964 he and his wife Jo joined the newly-married Trevor Lucas on an open-ended trip to England. (The Kinnanes stayed in England nearly 10 years, during which time Garry moved away from folkmusic, resumed his education, and started writing. Prior to retirement, he lectured in American Literature at the University of 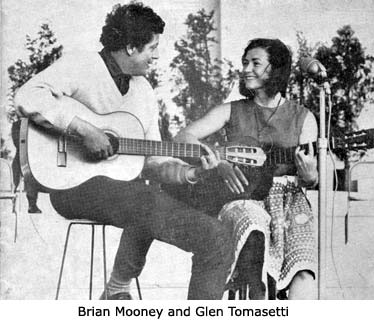 The Treble Clef advertised itself as a “conservative establishment concentrating on quality food and service” and catered primarily to what later became known as “yuppies”. One of several restaurants run by jazz bandleader Tommy Davidson, it reportedly toyed rather reluctantly with the idea of providing folksinging entertainment – ironically, as it is remembered today for having provided the launching pad for a trio-cum-quartet which became the most successful product of the Melbourne folk scene (not just in local terms, but internationally) [Herald 16 March 1963]. Soloist Bruce Woodley teamed up with Keith Potger, Ken Ray and Athol Guy of the doo-wop pop ensemble The Escorts early in 1962, hoping to make the transition from light rock to folksinging. Acquiring a repertoire of folk standards, the four boys quickly attracted a modest following as The Seekers. When lead singer Ken Ray found juggling marriage, work and music too demanding, the remaining Seekers invited jazz vocalist Judy Durham to sit in on one of the group’s regular Monday nights at The Treble Clef, and Australian music history was made.

Durham continued to juggle her developing jazz career with her contribution to The Seekers (appearing with both The Seekers and several jazz bands at a Moomba Folk & Jazz Concert, for instance), but by the end of 1963 the quartet had become sufficiently successful for its members to take the risk of turning professional and devoting themselves full-time to its future. W&G released an album Introducing the Seekers and early in 1964, the group accepted the offer of a round trip to England, as shipboard entertainers on the cruise-liner Fairsky. Within less than a year in England, The Seekers were signed to the Grade Organisation, made two albums for the World Record Club, and hit the top of the charts with ‘I’ll Never Find Another You’

Almost from the outset, the enormous and rapid success enjoyed by The Seekers served to damn the group in the eyes of the folk establishment – somewhat unjustly, in my view. The quartet is remembered today for more over-played hit parade relics like ‘Georgy Girl’ than for the traditional and contemporary folksongs which, in fact, made up the bulk of its repertoire. Along with creditable versions of Australian bush songs such as ‘With My Swag All on My Shoulder’, ‘Wild Rover’ or ‘South Australia’, the group developed an immediate and lasting affinity for American gospel material. Renditions of ‘We’re Moving On’ or ‘Just A Closer Walk With Thee’ drew inspiredly on Durham’s jazz credentials, made full use of her superb voice, and remain highlights of their kind.

There was more substance, of course, in criticism that The Seekers were primarily entertainers with an act grounded in popular folk material (like The Kingston Trio, Brothers Four, Nina & Frederik, etc) rather than committed folksingers, in touch with social issues and international contexts. They might sing protest anthems like ‘The Times They Are A-Changin’’ or ‘Turn, Turn, Turn’, but their clean-cut, non-rebellious image effectively rendered the material innocuous. The U.S. trio Peter Paul & Mary was subjected to similar accusations that it had diluted or synthesised folk material with commercial arrangements and sweetly sophisticated harmonies. From the beginning, though, PP&M publicly demonstrated its commitment to Civil Rights, an end to the Vietnam war, and social change. The Seekers never courted controversy in this way. Nothing underlined the quartet’s acceptability to mainstream, suburban Australia (and, hence, its lack of connection with political or social issues) than the award of  Australians of the Year, shortly before the four broke up in 1968.