Tom Lazar’s engagement of Marks (and subsequently Wyndham-Read, Lucas, et al) at the Reata was the first in a series of significant milestones in Melbourne’s manifestation of the folk boom. Another important event (in September 1961) was a Benefit concert for Pete Seeger which brought a number of budding and veteran performers together on the one stage. The legendary Seeger, along with other members of The Weavers, had been subpoenaed to appear before the House Un-American Activities Commission into the Communist Party in 1955. Refusing to name names at the height of McCarthy hysteria, he was indicted on ten counts of contempt of Congress and found guilty when the case finally came to trial in 1961. (The charges were dismissed by the U.S. Court of Appeals a year later).

Mounted by the Folklore Society at the Athenaeum Theatre, the “Pete Seeger Goodwill Night” was one of many international responses to the singer’s plight and massive legal bills. Participants included guitarist Sadie Bishop, the Austral Singers, Joan & Miles Maxwell, the Lumsden Family, Don Ayrton and The Southern Folksingers. In a letter thanking the society for its efforts, Seeger’s wife Toshi stressed that “the more publicity the House Un-American committee gets (anti, I guess I mean), and the more protests that are sent to VIPs, the more possible it will be that Peter may not have to spend that year in jail” [Lowenstein Papers]. A series of concerts by Seeger two years later, as part of a world tour, proved inspirational to a large number of would-be singer-instrumentalists.

For David Lumsden, recently graduated in Civil Engineering from Footscray Technical College, a request to render the National Anthem – Seeger-style – on 5 String banjo at the Benefit concert marked the formal launch of his solo performing career. From 1962 to 1967 (when he semi-retired from public performing due to the pressures of work and family) Lumsden was a regular at folk clubs and concerts in Melbourne, either in his own right, with his parents, or with singers Garry Kinnane or Lynne St John. (Lumsden and St John married in 1967). 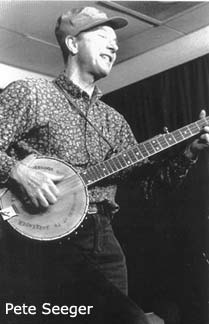 Peter Dickie cites Seeger’s 1963 visit as the catalyst for his becoming a performer. The son of Alf Dickie, a left-wing Presbyterian clergyman from Essendon who was prominent in the Peace Movement throughout the 1950s, Peter (like David Lumsden) had been exposed to Seeger’s music from an early age. He first picked up a guitar in the early ’60s (left-handed, he was obliged to order a custom-crafted instrument from the Maton company) and sang initially with a childhood friend, Ian White, at peace movement meetings and socials. The duo specialised in Spanish Civil War songs popularised by Seeger and The Weavers (like ‘Venga Jaleo’ or  ‘Si Me Quieres Escribir’). Dickie remembers that the duo met their idol at an informal at-home during the 1963 visit, and that they were thrilled by Seeger’s favourable response to their unaccompanied rendition of  ‘Ballad of 1891’. A professional artist, who trained initially as a High School teacher, Dickie subsequently combined painting (alternating rent-paying commercial commissions like designing posters or decorating theatre sets with his own work) and solo singing, contributing articles and reviews to Australian Tradition and Go-Set (a highlight was a short interview he and Mick Counihan managed to get with Bob Dylan at Essendon Airport in 1966), and leading the Victorian Folk Music Club’s Bush Band. Other members of the Bush Band, formed in 1964, included – at various times – White, Merle Gubbins, Jim Buchanan, David Taylor and Bert Cameron. They were also joined by David Lumsden, on banjo, for a number of recording sessions. Dickie’s solo repertoire evolved over time from American political material through locally-produced protest songs (he recorded a never-released EP of such material with Glen Tomasetti, Phyl Vinnicombe and Mick Counihan in 1966), to British and Australian traditional ballads.

As audiences multiplied in the wake of the success of the Reata and the Seeger Benefit Concert, other folk coffee lounges emerged. One of the first was in Balwyn (name now unknown). Garry Kinnane, a youthful Joan Baez enthusiast who had studied classical guitar under the gifted Carl Ogden, debuted there and played several nights a week for a couple of months in 1961, by which time the novelty had worn off for both the proprietor and local audiences. Ogden and Kinnane were both associated also with the Cafe Ad Lib, one of three early venues which emerged in South Yarra. The others were the Jolly Roger in St Kilda Road (close to the Melbourne Synagogue), and the Treble Clef, a few blocks east of the South Yarra railway station. In 1962 also, Tom Lazar expanded his business activities by opening the Little Reata in the city. Flamenco guitarist Brian Brophy was a drawcard at Hernando’s, a tiny jazz-meets-folk venue in King’s Arcade near the Armadale Railway station.

Established and run by colourful businesswoman Val Eastwood (best remembered for her restaurant Val’s in the city), the Ad Lib was a small domestic eatery, well-known to the initiated for the quality of its Italian cooking, and a discreet meeting-place for sections of the gay community. It effectively disappeared during the day. Housed in a covered alley-way behind a set of shops at 132 Toorak Road, its furniture, fixtures, etc., were all packed up and stored after closing and set up again late the following afternoon. Ogden played there for a few weeks (gratuitously) before recommending that Eastwood hire balladeer Peter Laycock. Invited to audition, Laycock cannily filled the cafe with “a claque of mates” and went over well enough for Eastwood to engage him (at 3 pounds). In the long run, he played Friday evenings at the Ad Lib for more than two years, eventually graduating to 5 pounds a night. He was soon joined by Glen Tomasetti, recently returned from overseas (initially she performed on Saturdays), and Brian Mooney, lately arrived from Sydney (on Sundays).

Laycock (b. 1928) had worked over the years as a newspaper reporter (in India), as a labourer, teacher of the deaf, even as an education officer at Geelong prison. By late 1962 he had become singularly discontented with teaching in suburban secondary schools. To his delight, performing at the Ad Lib and other folk coffee lounges (as they emerged) enabled him to resign his job at Watsonia Tech. and devote himself more and more to working at his pottery studio at Cottle’s Bridge. First exposed to folksongs as a choirboy in Adelaide, and then through left-wing student groups at university, the burly and bearded Laycock learned his first guitar chords from collector Ron Edwards in the mid-‘50s. He specialised in Australian bush lore (he probably knew a wider range of Australian material than any other professional performer prior to Gary Shearston), but was also well-known for his versions of comic songs (like ‘They’re Moving Father’s Grave’), bawdy ballads (‘The Chandler’s Shop’) and Elizabethan songs (Dowland’s ‘Fine Knacks For Ladies’). He remembers that the mix of material went down well with audiences at the Ad Lib and that he and Tomasetti both became adept at gauging audience mood and modifying their play-lists accordingly. They performed together frequently, their specialty being a duet of ‘The Banks of the Condamine’.

Hearing Pete Seeger’s ‘Bells of Rhymney’ induced Laycock to ask a friend who was travelling to New York to bring back a 12 string guitar, one of the first such instruments to reach Australia; he remembers that an earnest 16 year old Trevor Lucas would beg permission to practise on it at any and every opportunity. The Ad Lib closed down around the end of 1964, by which time Laycock was devoting more and more time to pottery and less and less to folksinging, although he has continued to perform intermittently ever since. (He appeared at the 1967 Moomba Folk Concert and at the opening of the Monash University Library, for instance. Much more recently he joined Martyn Wyndham-Read on-stage at the Cumquat Tree at Maldon, in country Victoria, during Wyndham-Read’s 1999 visit to Australia).