Marks settled in Sydney in 1963.  He appeared regularly at the Troubadour and the Last Straw, and was a regular on the TV show Dave’s Place,  before moving to New Zealand in 1966. 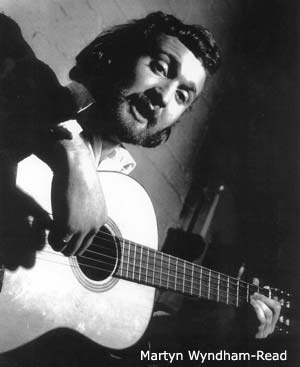 Glen Tomasetti has recalled that only a handful of singers were active when she left Australia for overseas in 1961; by the time she returned, in July of the following year, she was one of several individuals actually able to make a living at folksinging. Marks’ popularity (and the niche left by his temporary absence while touring overseas with the New Orleans Jazz Band) induced Tom Lazar to expand his stable, recruiting another young Englishman. Sussex-born Martyn Wyndham-Read (b. 1942) first developed an interest in folkmusic and folk-history listening to old-timers in his home-town, the village of Charlwood. He acquired his first guitar (a Hoffner Flamenco model) as a schoolboy and played Leadbelly songs for a time with a skiffle ensemble called The Black Diamonds. Wyndham-Read emigrated to Australia at age 19, intent on learning farm management first-hand as a jackeroo on a cattle station in South Australia. (“A little different to Sussex”). The property, Emu Springs, was a subsidiary of Haddon Rig and the job ended after a few months when the station was sold off for death duties: not before the outback experience had given the young musician his first taste of traditional Australian song, however. He has since compared first hearing ‘Click Go the Shears’ and ‘The Wild Colonial Boy’ with St Paul’s revelation on the road to Damascus.

Wyndham-Read subsequently spent the best part of a year hitch-hiking around Eastern Australia, gravitating naturally towards the beatnik/bohemian and music-friendly scenes at the Royal George in Sydney and Tattersalls in Melbourne. In late 1961 he teamed up with singer-guitarist Don Lee and the pair were recruited by Tom Lazar to play a four month season, seven nights a week, at a café in the resort town of Portsea. The café (remembered as either The Canteen or the Greasy Spoon) burned down at the end of the season, and the young performers were hired for the Reata. Wyndham-Read became a regular there, initially sharing accommodation above the café with a passing parade of other musicians (including Marks and Brian Brophy, a flamenco virtuoso who subsequently brought folksinging to Hernando’s Coffee Lounge a few blocks away).

Within a couple of years, Wyndham-Read had established himself as one of the most respected folksingers in the country, popular enough to be able to support a wife and two children through his performing.  He supplemented his native English repertoire with ‘Moreton Bay’ (learned from Peter Laycock) and other bush ballads learned from the Lumsden Family and Joy Durst of the Bush Music Club. “[He] sings folk songs in traditional style better than any other professional singer in Australia”, observed folklorist Edgar Waters after witnessing a typical Wyndham-Read set. “It rather grieves me to say it, but this pommy new-chum sings even bushranger ballads better than the local lads” [Australian, 20 Feb 1965; Sun, 21 July 1964]. 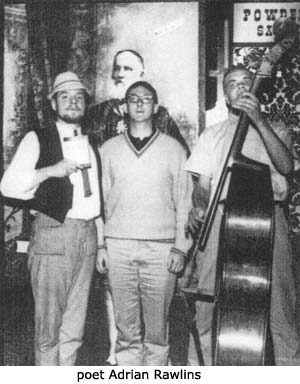 Lazar supplemented weeknight shows with highly successful Sunday afternoon concerts, an amalgam of jazz, folk and poetry readings. David Lumsden remembers that the cafe was typically packed to capacity, with patrons spilling out and queuing well down High Street, and that Lazar formed a partnership with theatrical director Wal Cherry to present a series of afternoon concerts at Cherry’s Emerald Hill Theatre in South Melbourne (in 1962). The afternoons (both at the Reata and Emerald Hill) provided an important performing platform for Marks, Lumsden, poet Adrian Rawlins, the Gerry Humphries Trio, Tina Date, Tomasetti, Wyndham-Read and (among others) a long, lean, red-haired teenager, Trevor Lucas.

Lucas, variously described as looking like “a refugee from an El Greco painting”, “Wild Bill Hickok, Rob Roy or a cavalier”, shot to prominence on the Melbourne scene not long after leaving Richmond Technical School and taking up a carpentry apprenticeship. (In that capacity, he helped Lazar fit out The Little Reata in the city). A deft instrumentalist (on 12 string guitar and harmonica), gifted with a deep and penetrating voice, he came to folkmusic after dabbling in C&W and rock’n’roll, and developed an early fascination with American blues musicians like Sonny Terry & Brownie McGhee. He was also a Bob Dylan enthusiast, and an unabashed advocate of the value of protest music. He informed the Sun, somewhat defensively [17 Aug, 1964]:

The protest songs of this century have a range of comment from industrial conditions to cruelty in the boxing ring … For some reason, many people scoff at them. But they usually have fascinating lyrics and tunes – and what’s wrong with protesting against social evils? People also scoff at my beard and long hair. Those who scoff seem to me to represent the intolerance these songs protest against.

Lucas recorded an album, See that My Grave is Kept Clean, for East Records in 1964, and also appeared on the Score compilation Australian Folk Festival, with a powerful version of Gary Shearston’s ‘The Voyager’. On New Year 1965 he travelled to Europe with his wife and fellow folksinger Garry Kinnane, and quickly made a name for himself on the British folk club circuit, touring with Ian & Sylvia and Odetta,  even appearing at a Belgian concert headlined by Peter Paul & Mary and Joan Baez. He recorded an album of Australian songs for Reality records, Overlander (1966), and worked with another Australian expatriate, jazz and gospel singer Kerrilee Male, in the electric folk group Eclection before meeting (and ultimately marrying) legendary British singer Sandy Denny. Lucas and Denny teamed in the groups Fotheringay and Fairport Convention. (Following her death in 1978, he returned to Australia and worked – primarily – as a record producer, until his untimely death in February 1989).