Soon after opening the cafe, the Smith brothers expanded their operations to take in a dance-hall 200 yards away. Fitted out “with Australiana and Beach chic” and reopened as the Wild Colonial, it played host to the cream of Melbourne’s trad jazz bands from 1958 until 1964, when fashion dictated a change to live rock bands. “Anyone who was anyone played there”, remembers Robin Smith, noting that jazz vocalist Judy Durham was recruited for the summer of 1963/4. (Her name features in advertising on the Arab’s distinctive 1964 menu; Durham had to back out at the last moment, however,  when she received an unrefusable offer to travel to England as part of The Seekers). As well as playing at the Wild Colonial’s enormously successful jazz dances most evenings, artists would be called on to entertain patrons at the Arab. Peter Dickie, then still a teenager, remembers first being exposed to his first “real live folkmusic” when he heard Marks play there one night in 1959.

Marks’ folksinging  was “part of the special things being offered on different nights at the Arab”, notes Alistair Smith, and the singer was re-hired a couple of years later (the summer of 1960/1) to alternate folksinging and fronting Frank Traynor’s band. In 1961/2, the Smiths recruited Don Carless, a burly entrepreneur-cum-theatrical director (well versed in the jazz milieu, variety shows, even the circus), to add a professional gloss to the jazz dances and to take care of entertainment at the restaurant. This was Carless’ first exposure to live folkmusic. He became close friends with Brian Mooney 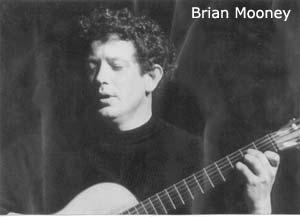 , an itinerant New South Welshman who succeeded Marks as resident folksinger at the Arab Cafe (and provided light musical relief at the Wild Colonial) on the strength of an audition tape he recorded in Sydney. Soon after Carless made a more permanent mark on the Victorian folk scene when he became a partner in Traynors.

The cafe itself was run on strict time-and-motion principles (then in vogue). Artists performed short, precisely-timed sets, broken up by lengthy interludes which enabled a 100% turnover in customers. Meanwhile, the practice of interspersing folksong brackets as a change of pace at the Wild Colonial jazz dances soon caught on at metropolitan jazz venues such as the Melbourne Jazz Cellar.

Marks dates the start of his solo career at the Reata to Easter 1960. He also continued to perform regularly with the MNOJB at Jazz Centre 44 in St Kilda and elsewhere, or on record (a series of EPs and LPs for Swaggie Records).  In 1961 the band signed with English agent Lyn Dutton. Marks recalls: “I found out what it is like to be a pro musician! After the seven and a half months [touring the UK], Dutton offered us four months in Germany, which we took. The last booking folded, I left the band, went to England and Long John Baldry took over my vocal spot”. He returned to Melbourne in mid 1962 and devoted himself to folksinging full-time. For new converts he was a charismatic figure. Bluesmen like Marks appeared to “live what they sang about” and were associated with a tough, slightly scary and alluring world (a world rendered even more tantalising by the barely veiled contempt with which the true blues fanatic tended to regard any other form of music).

Marks was the first jazz musician to make the formal crossover from jazz into folk, but by no means the only one. Throughout the ’60s, the strong nexus between the two would be underlined by ongoing (and national) interplay. A significant number of coffee lounges, like the Primitif in Brisbane, operated out of venues previously associated with the jazz scene, or featured both jazz and folk entertainment (Hernando’s, the Esquire and the Gassworks in Melbourne; the Shiralee and the Hole in the Wall in Perth, for example). Entrepreneurs like Frank French, Frank Traynor, Tommy Davidson and Don Carless entered the folkmusic industry after years on the 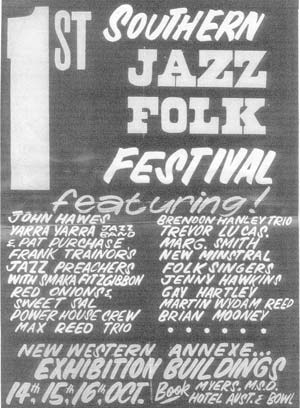 Jeannie Lewis, who started singing an eclectic mix of Australian and international folksongs as a first year Arts student at the University of Sydney in 1962, quickly developed a preference for the blues and recorded with both the Ray Price and Alan Lee quartets. Judy Jacques, who became vocalist with the Yarra Yarra Jazz Band at age 15, could boast selling more copies of one of her recordings than had the latest Elvis Presley single, and was one of the few jazz musicians who appeared regularly on commercial televsion. During the folk boom, Jacques carved out a special niche for herself as a specialist in black gospel music and “negro spirituals”, recording with her own ensemble, The Gospel Four. In the early ‘60s her chief competition came from another Judy, Judy (or Judith) Durham, a  young secretary who started singing jazz publicly after a friend loaned her some Bessie Smith records. Durham debuted with the University Jazz Band at the Memphis Club in mid 1961 and subsequently fronted several other bands, most notably Frank Traynor’s Jazz Preachers, with whom she made her first recordings. During the same period (from late 1962) she began performing folksongs, initially one evening a week, in up-market South Yarra, with Bruce Woodley and two of Woodley’s old school friends,  Athol Guy and Keith Potger. Woodley, in turn, combined a day job in advertising with the folk quartet and occasional solo gigs at Traynors and the Little Reata, and still found time to play the banjo and sing at Downbeat with a jazz ensemble called Morris Plonk’s Moonshine Five.

More modestly, Hobart’s Patsy Biscoe began her singing career fronting the Sullivan Cove Jazz Stompers while at university. Perth’s Maggie Hammond alternated singing Baez-style ballads and classic blues as vocalist with the Westport Jazz Band. After sharing the stage with Kenny Ball, as a member of the Dixieland ensemble The Traditionals, Perth bassist Murray Wilkins joined the West Coast Trio. Eighteen year old Melbourne singer Lynne St John alternated sets upstairs at the Campus, fronting Graham Bennett’s band The Hotsands, with folksong brackets in the coffee lounge downstairs. Margaret Smith did likewise, offsetting her folksinging with appearances at the mod Opus jazz club. Even such an unlikely candidate as the classically-trained  songstress Tina Lawton first appeared at the Catacombs in Adelaide with the University Jazz Band. In Melbourne, Margret Roadknight would prove equally at ease in the folk and jazz milieux, mixing appearances on the folk circuit with guest stints with Traynor’s Jazz Preachers.

Meanwhile, Paul Marks led the field at the Reata. Best remembered for his skilled interpretations of American blues, he would also deliver programs of traditional English folksongs, spirituals or sea shanties on occasion. Peter Mann, proprietor of the Discurio record store, recorded him live and issued the LP on Score Records as Paul Marks at the Reata. (Effectively a tribute to black American folksong, the record includes ‘Midnight Special’, ‘We Shall Overcome’, ‘House of the Rising Sun’, ‘Cotton Fields’, as well as spirituals like ‘Sinner Man’, ‘Michael’, ‘This Train’ and ‘I’m Going to Walk and Talk with Jesus’). Something of a minor legend among his successors by virtue of having been the first coffee lounge folksinger in the country, he sadly found it impossible to maintain the momentum of his career. In a review of one of his last Melbourne appearances (at the Little Reata), Adrian Rawlins conceded that Marks was an inconsistent performer and that overwork with the MNOJB had affected his singing for a while. Even so (Rawlins assessed), he was far from being (as some “knockers” claimed) “a depleted talent”:

He is the only white singer I have heard who has developed the natural glissandi which are the essence of blues cadences … [‘Black is the Colour’] assumed a rhythmic inevitability usually created only by a jazz band at the peak of creative swinging – yet Marks was singing melodically! When he stopped, it seemed as though in the middle, life felt empty without the song going on … I had been listening to the song with every bone in my body … This tremendous communicative power is Marks’ genius … [Had] Bessie Smith been in the audience as Paul Marks sang her song [‘Empty Bed Blues’] … she would have applauded: not with her hands, not with cheers; with the tears that have welled and tumbled down her wide and generous, sad, sad cheeks [Music Maker, April 1963].