THE EARLY YEARS OF THE FOLK REVIVAL IN ADELAIDE (cont.)

[Parts of this article were previously published in Infolkus, June-Aug 2004; and in   Cornstalk Gazette, Feb 2005] 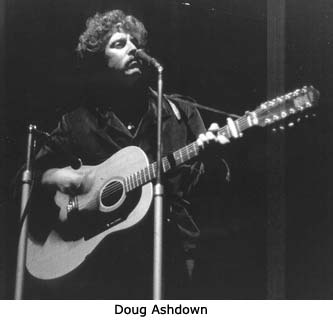 Doug Ashdown (b.1942) came to folkmusic after several years in the local rock’n’roll scene. Given a ukelele at age 10 by his father (a George Formby fan), he progressed to the guitar and formed his own skiffle band, The Sapphires, in 1958. (Another member of the band, Trev Warner, went on to become a well-known fiddle and banjo-player). When his father transplanted the family back to England for nine months in 1960-1, the youthful Ashdown played electric guitar with an ensemble called Rommel and the Desert Rats (“We idolised The Shadows”). On return to Adelaide, he spent time (1961-4) as one of The Beaumen along with Bobby Bright who went on to make his name (with Laurie Allen) on the Melbourne pop scene.

Ashdown started listening more and more to Baez, PP&M, etc; in the process, “I discovered Dylan and that was it”. An important local influence was Dick Bond who played one of the few 12 string guitars around. Bond’s was a distinctive instrument, imported from Britain, with a V-shaped sound-hole (like the legendary Seeger’s). Ashdown traded in his Fender electric on one of the first 12-string guitars made by Melbourne company Maton, and he quickly earned a reputation for his instrumental dexterity:

… There weren’t many people playing 12 string guitar then – it looked like an impressive and difficult thing to play, I suppose. Anyway I’d got this style going – a sort of rock strum and not just the usual folk pick. I was singing much the same material as everyone else but it sounded unusual because of the way I handled it.

Ashdown debuted as a folksinger at the Purple Cow, late in 1964, and he had his first big break when Tina Lawton asked him to substitute for her at a Town Hall concert. ‘Ella Speed’ brought the house down. Working during the day for the Post Office, he quickly became a fixture on the coffee lounge circuit. “Those days were the halcyon days of folk”, he recalls. Saturday nights frequently found him performing 5 gigs, usually starting off at the Sunset, then on to the Purple Onion, the Folk Hut and the Catacombs, and finishing up at the Nissen Hut.

It was as the Folk Hut’s chief drawcard that Ashdown came to the attention of CBS’s Sven Libaek, then in Adelaide scouting for new talent. He was offered a recording contract (as were The Wesley Three and Tina Lawton), and his first LP, This is Doug Ashdown, was recorded  – “straight down with a couple of overdubs” – on a 2-track machine in Sydney in mid 1965. Patsy Biscoe, with whom Ashdown was romantically involved at the time, recorded her first LP to his guitar backings, during the same two-day session. Ashdown subsequently recorded two further LPs for CBS, The Real Thing (1966) and Source (1968). Highlights of these early recordings include distinctive versions of Dylan’s ‘Quit Your Lowdown Ways’, Leonard Cohen’s ‘Suzanne’, Paul Stookey’s ‘House Song’, ‘Ella Speed’,  Shearston’s ‘Sometime Lovin’’, and Ashdown’s first self-composed song ‘Something Strange’ (a stream-of-consciousness ballad which he now dismisses as “nonsense”). Mark Spoelstra’s  poignant ‘Just a Hand to Hold’ was learned from Judy Collins during her 1965 visit to Adelaide. ‘I’m Going Away’ was written for him by Sydney singer Mike Driscoll. Ashdown, along with Biscoe and Perth trio The Twiliters, also provided national exposure for talented Adelaide singer-songwriter Phil Sawyer, by personalising (and recording) such classics of the period as ‘I Know a Girl’, ‘I Thought I Heard Somebody Call My Name’, ‘What Season’s Coming Nigh’ and ‘Thanks for the Hand to Hold’. (Sawyer subsequently made his living working in the fishing industry). 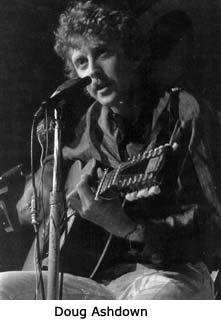 Almost from the beginning, Ashdown objected to being categorised, insisting that he never thought of himself as a folksinger, and that he found the whole “folk thing” too restrictive. Counting Nina Simone, Richie Havens and Fred Neil among his diverse musical influences, he once declared:

I’ve always tried to emphasise the fact that I don’t believe there’s any real difference between folkmusic and any other kind of music. But because I get up on a stage with an acoustic instrument, it puts me at a disadvantage right away.

I’m not aspiring to be a pop singer, but I’d rather be labelled as one than have to work in hotels … This image of folkies has been taken to such incredible extremes. It’s all imagery. They expect you to wear cords, sneakers and sloppy jumpers. It’s taken me a long time to get out of this bag. People still ring up and ask how much I want for some gig. I say “ring my manager”. They can’t believe it. They say, “What’s a folkie doing with a manager?”.

Unsurprisingly, this lack of commitment to the folk scene earned Ashdown the disdain of the folk establishment – as did the commercial success and orientation of his recordings, or his willingness to record Lennon-McCartney’s ‘Hide Your Love Away’ and the jazz standard ‘Till the Real Thing Comes Along’. (On one occasion, a number of audience members walked out of a folk concert in Sydney when he attempted to perform an electrified version of Dylan’s ‘I Shall Be Released’). Ashdown, in turn,  once confessed to interviewer Greg Quill that his third album, the ground-breaking 1968 LP Source reflected his dissatisfaction with both the folk and mainstream music scenes [Go-Set, 9 Aug & 11 Oct 1969, 1 Aug 1970]

“Above all, music must have entertainment”, he once declared. Intensely critical of the pop scene’s preoccupation with drugs, doom and destruction, he teamed up with Jimmy Stewart in 1968, creating a solid body of self-composed material about “real things”  – small portraits and studies of individual lonelinesses and the patterns of particular loves, recounted (he maintained) without either judgment or world-shattering conclusions. The material was preserved on a ground-breaking double LP, The Age of Mouse, for Sweet Peach Records (a now-legendary label which, in its heyday, embraced Kevin Johnson, Irene Petrie, Lee Conway and Levi Smith’s Clefs).  He tried out the new material extensively on audiences at PACT Folk, the singer-songwriters’ nirvana in Sydney. According to Go-Set, “his Saturday night concerts in Sydney … built the PACT Folk thing into a ‘happening’. A ‘happening’ devoid of any stimulus other than that of experiencing a true artist”. Highlights of The Age of Mouse included ‘Georgetown’ (a tribute to Ashdown’s good friend John Stevens), the powerful ‘Saddest Song of All’ and the elegant ‘Antique Annie’s Magic Lantern Show’ (the last covered by Marian Henderson on Cameo). It was followed by the LP Doug Ashdown Live!

Ashdown married and moved to Sydney in 1970. He and Stewart then spent a couple of years in the USA, contracted to write songs for the giant Nashville-based Tree Corporation, and he found international fame with their ‘Winter in America’ (recorded after returning to Australia in 1973). He has remained a respected elder statesman of Australian acoustic music ever since.

Better remembered today for his organisational role at the Folk Hut, [John Fulton] Stevens was also a likeable and crowd-pleasing performer. Perhaps best remembered for bawdy material such as ‘Never Wed An Old Man’ or his irreverent adaptation of ‘Whistle a Happy Tune’, his repertoire ranged over Ian & Sylvia, Richard Farina, Gordon Lightfoot, his own compositions (including ‘Big Boat’, the beautiful ‘Jennie’ and a heartfelt lament for Martin Luther King, all of which he wrote after the “folk boom”, while living in Tasmania), rarities like ‘Friday Morning’ (which he found in a 19th century hymnal and first aired at a Uniting Church Folk Mass at Burnside), Australian songs like ‘The Tent-Poles are Rotting’ (acquired from Alex Hood and Dave de Hugard). An unabashed romantic, he made a specialty of “heart-rending love songs”, songs which enabled him “to reach out and pat the audience on the head”. Remembering the many occasions on which he might look up from singing to see tears rolling down the cheeks of those seated in the front row at the Folk Hut or elsewhere, he recalls:

Having the ability to make people respond to what the song was written for, was more rewarding than having a whole hall-full of people applauding.

A distinctive feature of Stevens’ performances was his use of a unique 9 string guitar. The guitar was originally a Hagstrom which he aquired from a Swedish sailor for a few pounds, and which he modified himself after hearing Phil Cunneen’s 12 string playing. In Fulton Stevens’ view, the modified guitar gave him the best of both worlds: the upper octaves without the bass tremelo. Fortunately, the Hagstrom’s fret-board was wide enough to accommodate the additional strings. 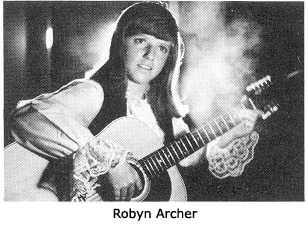 of her peers, had her start on The Country and Western Hour, at age 15. Possessed of a remarkably mature and powerful alto voice, she made the finals of Bandstand’s  Starflight International Talent Quest (rendering ‘The Times They Are A-Changing’ and ‘If I Had My Way’) and subsequently appeared on Bandstand’s Folk specials, The Country and Western Hour, and other popular TV and radio shows, brandishing a 12 string guitar and (like Melbourne’s Lenore Somerset) drawing heavily on Odetta for material. Folkmusic took a back seat when Smith entered the University of Adelaide, to train as a high school teacher, but she found time to participate in the Inter-University Folk Festival in Hobart in 1968, and to form an all-woman skiffle group, the Jug-Scrubbin’ Mommas. Smith subsequently left the folk scene behind as she moved into cabaret and musical theatre. She adopted a new stage name in 1970 and, as Robyn Archer, ultimately became one of Australia’s most successful musical exports overseas. Husband and wife team Lyn and Graham McCarthy were among the earliest players on the Adelaide folk scene; they took their neo-Nina & Frederik-style act to England in 1963. So successful did it prove during a two month tour of Scotland that the couple opted to turn professional and they became fixtures on the London folk club circuit (making more than three hundred radio and TV appearances, and four LPs).  Their first album, Way Up from Down Under (1966), teamed Australian songs like ‘The Wild Colonial Boy’ and ‘The Overlanders’ with such perennials as ‘Fare Thee Well’ and ‘The Times They Are A-Changin’’. The McCarthys’ subsequent releases contained increasingly middle-of-the-road material, much of it written by Lyn, but Graham did record an album of Best-Loved Folk Songs in Adelaide – backed by Rob McCarthy and Phil Cunneen – when the pair returned home in the 1970s. (12 string guitar and keyboard virtuoso Cunneen would carve out a career as a musical arranger within the TV industry).

The John Gordon Trio came to prominence through appearances on the nationally-televised talent quest Showcase 65, and proved popular with ‘middle Australia’, performing at hotels, Leagues and RSL clubs, and the bigger coffee lounges. The trio reportedly combined a folk sound “with a lot of comedy and hokum thrown in”. Also preoccupied with the lighter side of folkmusic were The Skillet Lickers, a gifted bluegrass band comprising Rob McCarthy, Brent Miller and John Munro. The group, which appeared regularly on The C&W Hour, later reconstituted as Country Express. (Munro, McCarthy and Miller would remain respected veterans of the Adelaide folk scene in the 1970s and 80s, as would singer Irene Petrie. Munro recorded a stunning LP, Nightpiece, with Denis & Lynne Tracy in the 1980s. Petrie recorded a couple of singles for Sweet Peach in the ’60s, notably a cover of Gordon Lightfoot’s ‘Does Your Mother Know’. In 1984 she toured with U.S. legend Tom Paxton and released an exceptionally fine album, If Wishes Were Fishes, with backing by the Tracys, Eric Bogle and the former Skillet Lickers).