A Snapshot of ‘Manar’


A WALTZ THROUGH HISTORY AND A SNAPSHOT OF ‘MANAR’ IN 2007 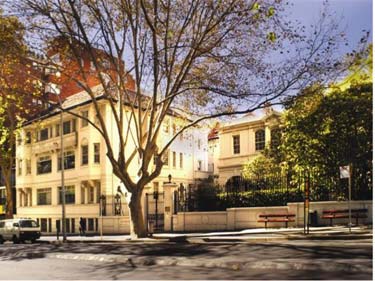 Potts Point is a lot more fun than a suburb named after an accountant deserves to be. Joseph Hyde Potts, who was employed by the Bank of New South Wales, purchased six-and-a-half acres of harbourside land (c.1841) in an area then known as Woolloomooloo Hill – which he renamed Potts Point.  The suburb, recognized as having the highest population density in Australia and is roughly trapezoidal in shape, and at its greatest extent is no more than one kilometer long by two hundred metres wide.

This survey of Potts Point will give a perspective of the suburb’s history and, in particular, its social fabric and architecture, especially as seen through the old Macleay Estate and the ‘Manar’ residential complex at 42 Macleay Street, where this writer lives. The survey, primarily prepared for the residents and local history enthusiasts, is also a window into how the old Company Act and Strata Title management systems work.

Potts Point was the site of some of Australia’s earliest apartment buildings, and from the 1920s through to World War II the area was intensively developed along those lines. As a result, it boasts the highest concentration of Art Deco architecture in Australia. Amongst the most notable examples are the Cahors and Franconia apartment buildings in Macleay Street, and what are arguably two of the finest Streamline Moderne buildings in Australia: the Minerva (or Metro) Theatre and the Minerva Building in Orwell Street. The Minerva (1937-58) was built by a consortium led by the theatrical entrepreneur David Nathaniel Martin as a 1000 seat playhouse and cinema (1937-58). A ‘rather bald, dark, medium-built man with a liking for gay ties’, Martin neither drank nor smoked; he had ‘two strong dislikes—off-colour comedians and fat chorus girls’ (he kept diet sheets in his desk for the latter’. The Metro Theatre (as it was then known) was the site of the first Australian production of the musical Hair in 1970. The area also boasts many fine Victorian-era terraces. Like it or lump it, nearby Kings Cross is not a Sydney suburb – it is actually part of Potts Point. 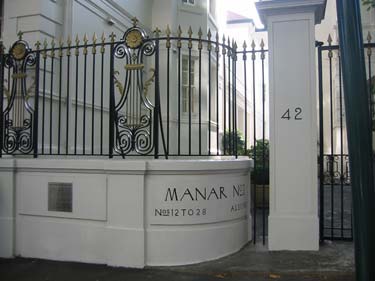 The residential complex known as Manar with its three distinctive white buildings, and surrounding gardens, offers one of the most interesting histories of the Potts Point area and is considered one of the jewels of Macleay Street. The land was originally part of the vast Alexander Macleay Estate, some 54 acres, granted by Governor Darling to the Colonial Secretary soon after he took up his position in 1825. Although Macleay built Elizabeth Bay House in the 1830s (the foundation stone was laid in 1835), and lived there with his large family between 1839 and 1845, he actually commenced work in developing the gardens in 1826. Macleay, a Scot, was a career diplomat, visionary, and, at the time, the English-speaking world’s greatest ornithologist. Elizabeth Bay House, designed by John Verge, grand in its scale and classic in its design, was highly visible from the harbour, and the pride of Sydney. The gardens, described as a ‘botanist’s paradise’, ran from the gates where the El Alamein fountain now stands, down to the harbour shore. Folklore has it that running short of money, he sold a portion of the land to ‘fellow Scots’, the Gordon Family. They named their site Manar in honour of their original Scottish estate. The Gordon clan also held properties at Braidwood and Hunters Hill, also named after their Scottish Manar heritage. The family still retain the original Scottish house and their Australian descendents also retain the Braidwood Manar property.

The first building was positioned at the rear of the site of the current Building One, and built in the late 1830s at a time when both Woolloomooloo and Potts Point were considered by rich colonials as ‘highly fashionable’. Brougham and Victoria streets were at that time called ‘Woolloomooloo Heights’! Prior to the purchase by Hugh Gordon the Manar site housed the Elizabeth Bay House worker’s cottage.

In July 1836 a young Hugh Gordon reached Sydney to be welcomed by his great friend Patrick Leslie, of Warthill. Leslie immediately introduced him to the Hannibal Macarthur’s of Vineyard (later Subiaco), western Sydney, and they became close friends. Sydney was small and somewhat ‘snobbish’ and the young bachelor certainly landed on his feet since Mrs Hannibal Macarthur was Anna Maria, daughter of Governor King. In his letters home to Manar, Inverurie, Aberdeenshire, Scotland, Gordon described this ‘charming family’ saying ‘Mr Macarthur reminded him of his late and much loved father’. He was also full of praise for the ‘attractive daughters’, one of whom soon after married his friend Patrick Leslie.

Hugh Gordon was one of five sons, and five daughters, of Hugh and Elizabeth Gordon. Hugh Gordon senior had been a very successful partner of the East India Company, worked in Madras, making a fortune in jewels. On his return to Scotland he purchased a grand property known as Woodhall, which he re-named Manar (pronounced Man Nar) after the Manar Straits between Ceylon and South East India, an area famous for the pearl fishing that contributed to his wealth.

The family history relates how Hugh Gordon and Elizabeth had ‘great

sadness” in as much as “two of the sons died at infancy, a third died in his teens and another, young Hugh, immigrated to Australia”.

Hugh Gordon, in the fashion of the day, came to Australia for reasons of health and, according to diaries, had the good fortune to be ‘treated by an excellent doctor under whose care, together with the climate, brought about an almost complete cure.’ He rented a cottage at Parramatta (for fifty pounds a year) where he reported back, ‘Leslie sports a red coat’ and there are ‘packs of hounds’  – as they emulated the fox and hound chases of home. One of his despatches says,

‘I drive tandem not to cut a dash, but of necessity, the roads being so bad.’

In September, 1836, Leslie and Gordon took a steamer trip up the Hunter River and were ‘deeply impressed with the rich soil, and saw many pelicans along the river banks.’ Later Hugh Gordon visited China and Java, and, on his return, married Mary King Macarthur, then only nineteen, ‘to whom he had already lost his heart four years previously.’

I have not been able to pinpoint the exact date Hugh and his young wife purchased the Potts Point property but would suggest it was around 1840, possibly after receiving his inheritance after his father’s death in 1834. No doubt a sailing ship carried a plea back to Scotland to ‘send money’. Maybe the Macarthur-Onslow family loaned the money? It might not be a coincidence that the rear of Manar, which quite possibly was, at the time, the entrance to Manar, was Onslow Place. We do know Hannibal Macarthur, John Macarthur’s nephew, did not make the loan, as he was a declared bankrupt by 1849. Alexander Macleay died in 1848.

Not a lot is known of life at Manar in the late nineteenth century, and for that matter, the reasons and date of the Gordon’s withdrawal from the property. Potts Point was definitely the family’s Sydney home as Braidwood was their primary home and where their son, James Gordon, was born in 1845. James Gordon, a lawyer, later became a Member of the Legislative Assembly (1887-89) and member for Young (1887-89) providing Manar with its first political link, and certainly not its last. He had four daughters and three sons.

(One newspaper clipping I discovered in the Mitchell Library states that Manar Cottage was built in 1867 for Alfred and Mary Lamb, who, presumably, purchased the property off the Gordans. However the article then goes on to say the cottage was demolished and ‘replaced with a two-story Victorian Italianate villa, which was also called ‘Manar Cottage’ after Mary’s family property in Braidwood. Alfred died in 1890 and the cottage was let to a succession of tenants before being sold in 1912”.)

Life at Braidwood appeared successful. It was an extremely large and profitable agricultural venture with Hugh Gordon’s occupation listed as ‘pastoralist’. The road from Braidwood to Sydney was, at best, described as such, however bullock and dray reports point to it being extremely muddy and difficult to navigate. One wonders how long it took the family to travel up and down. The introduction of the stream railway link to Goulburn, one of the earliest in the State, in the 1850s, changed the fortune of many early settlers, as did the later discovery of gold. The original Braidwood property was in excess of 20,000 acres and is now reduced to a more manageable 4000 acres.

By the end of the nineteenth century Australia had changed forever. This was a time of immense commercial activity for Sydney as the bulk of Australia’s population relocated from the country to the cities.

Many old style properties were demolished to make way for factories and export companies. Macleay street in 1901 was quite the stylish boulevard with several major nineteenth century estate houses, which had been preserved by the fact that rather than being demolished  were refurbished into boarding houses, to accommodate workers from nearby Woolloomooloo’s factories and wharves.

As Australia approached the ‘Roaring Twenties’, around 1916, work commenced on expanding and modernising Manar by adding the now Macleay Street end of building one. The architects, using a classic art deco style, were E. A. Scott, Green & Scott. As can see by the building’s inscription, it was completed in 1919. It was developed by the Davis family however, at this stage, there is no information about this family or what date they bought the property. It was possibly around the time of WW1. The other comparable building of the period was The Astor Residency in Macquarie Street, in the city, being opened in 1923. Manar’s Building Two was built in 1928 and Building Three, no doubt interrupted by the lean times of the Great Depression, was finally built ten year’s later, in 1938. After WW2 Building One, like many inner city large houses, primarily became a boarding house.

Macleay Street must have been quite noisy in the first half of the twentieth century. Motor vehicles, often extremely noisy, had replaced the horse-drawn buses and carts, and an electric trolley bus operated in the suburb with its terminal on the corner of Macleay and St Neot’s Avenue.

As Sydney’s wealth increased so did its demand for fashionable housing. Some of the local grand residences were demolished to make way for more practical housing however, by the late twenties, things had settled down. It is surprising that so many of the street’s now well-known major buildings, including Manar’s building three, were built during or straight after the Great Depression including Byron Hall (1929), Werrington (1930) and Wychbury (1934) both on Manning Street, and Wyldefel Gardens (1934 – completed 1936).

One well known ditty, simply known as ‘Billo’, celebrated walking down Macleay Street which, according to the song lyrics, was already being found guilty by association with Kings Cross.

Oh give me old Sydney and give me a girl,
And I’ll be simply okay;
Can anyone point, to a better old sight,
Than Macleay street on Saturday night?
When me and my girlie go twirling about,
My mates, they try to be smart,
Get out of the way, it’s Billo they say,
Walking out with his true dinkum tart.

Macleay Street in the first half of the twentieth century was considered a ‘rich area’, especially attracting the old squattocracy who set up their pieds à terre (small second homes in the city, typically apartments or condominiums).